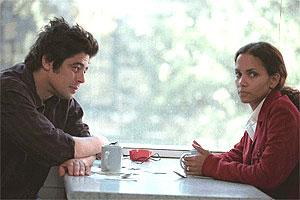 
There’s a Jewish story about Truth visiting a village and asking entrance to the villagers’ homes. She knocks on their doors, but they are revolted at the sight of her.  Turned out onto the street, she is found naked and cold, by Parable, who takes her in. There she is dressed in story, and in her new gowns Truth is welcomed into the homes of the villagers.

A battle runs through Things We Lost In The Fire, and it’s a battle between the size of the truth that the film’s creators have chosen to tell and the robes that they have chosen to dress it in. It’s a film about death, redemption, grieving, affection: truths that demand dressing skilfully and subtly. Unfortunately, the film struggles to free these truths from the clichés in which they have been dressed and the result is an oddly mixed affair.

We have the standard story elements and characterisations of the Hollywood school of moral philosophy: Jerry is a junkie so he listens to Lou Reed and sits on a linoleum floor. Audrey, the widow of Jerry’s best friend, works in some ambiguous “creative” job using wood. Her husband, who supported his best friend throughout his addiction, was a housing developer, who ‘saw opportunities where no one else could’. There’s even a middle class, middle-aged divorce subplot in the form of a balding neighbour.

Working against these cardboard figures is some high quality acting from Halle Berry and Benicio Del Toro, who both managed to wring emotive meaning from a lazy script (“fluorescent means...it’s lit from within”, “accept the good...one day at a time” etc.), and the presence of those big themes that don’t allow you to forget that you’re watching a Serious Movie. The extreme close-ups of the actors’ faces mean that sometimes it’s their pores that are doing all the work, but Berry in particular communicates the selfishness of new grief with considerable skill.

But what is the result? There were affecting scenes: one shot of Jerry and Audrey drinking coffee whilst a shiny new teaspoon glinted beside his cup showed how directorial restraint can work, and it’s impossible to ignore the horrible awkwardness when a morning-after Jerry is told the news of his friend’s death. The scales tip towards the other direction unfortunately, when you start considering things like the endless shots of water (tears, washing hands, renewing shower, the fluorescent swimming pool that so terrifies one of the children) or the juxtapositions of innocent but perceptive children with damaged, needy adults (at one point Jerry is prevented from stealing silverware by Audrey’s daughter telling him off). In some ways this is the fate of all films that attempt to deal with something so intimate on such a wide screen. Things We Lost In The Fire fares badly in comparison with films like Crash or Half Nelson, however, and is revealed for what it is: Hollywood doing redemption: slick, occasionally tear-jerking, predictable.

Why does this matter? It matters because these big truths – self-forgiveness, growth, true friendship – matter. When they are dressed in clothes that are neither remarkable nor beautiful, two negative things (at least) can occur. There is the risk that the truths themselves become clichés in the minds of the audience, resulting in a spiritual cynicism that we certainly don’t need or want right now. Secondly, the truths can be reduced as they are made commercially palatable: Empathy becomes “look at someone else who’s miserable and you’ll see things aren’t so bad”; redemption becomes a soundbite and a bunch of roses. The might of these initial promptings, if told badly, becomes blanched, wilts in the telling.

Things We Lost In The Fire can’t be faulted on its earnestness. Its problem is that it wears clothes that audiences have seen time and again – a comfort maybe, but certainly not beautiful.

Rambo: A Cry for Freedom