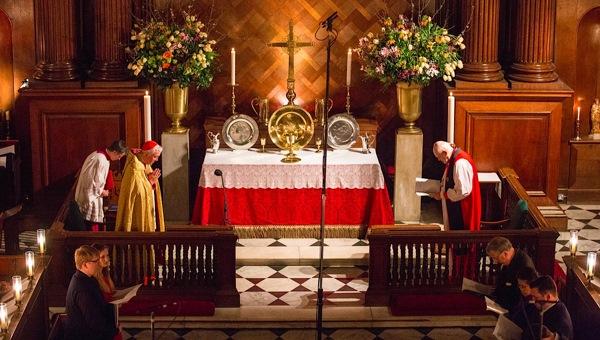 The Vespers celebrated in Hampton Court Palace’s Chapel Royal on Tuesday 9 February was the first service according to the Latin Rite of the Catholic Church to be held in that historic venue for 450 years. Gerard Kilroy describes a memorable evening of discussion and shared liturgy which would, he says, have met with the approval of Edmund Campion.

As the last bright shafts of a wintry sun transformed the Tudor towers of the west gate of Hampton Court Palace into a stage set, guests poured in, turning their backs on the handful of protesters on the bridge over the Thames and on four centuries of religious division in this country. ‘Faith and the Crown’, which was drawing so many enthusiastic priests and laity into the Palace on 9 February 2016, had at its heart the joint celebration by the Cardinal Archbishop of Westminster, Vincent Nichols, and the Bishop of London, Richard Chartres, of Solemn Vespers in the Chapel Royal. While the Cardinal led the intercessions to Our Lady, the Bishop, who is also Dean of Her Majesty’s Chapels Royal, preached a powerful sermon that combined a sense of the historic significance of the occasion with clarity about the major issues of our time, including the challenge of the largest refugee crisis in recorded history.

Before Vespers began, we filed into the Great Hall (a building begun by Cardinal Wolsey and finished by Henry VIII) for a discussion. Beneath the stunning hammer-beam roof, the two churchmen made clear they had not only known each other some time, but also received consecration as bishops in the same year, 1992. The dialogue began with the two men pointing to some of the paradoxes of the English reformation, including the survival of the most famous recusant of the Chapel Royal, William Byrd (1540–1623), during the reign of Elizabeth. The Cardinal spoke of the current shift in Catholic attitudes as a result of Vatican II, and quoted Pope John Paul II: ‘Truth cannot be imposed, only proposed’. When Cardinal Nichols said that Catholics were now a significant minority, Bishop Chartres quipped: ‘We are all minorities now’.

The churchmen then considered the wider challenges facing Western society. Both men ruefully reflected on the erosion of the Judaeo-Christian foundation of democracy: focus groups were no substitute. The young, they said, were especially vulnerable to extremism because of the lack of meaning in their lives, which meant that some could go ‘from teenager to terrorist in four weeks’. Nevertheless, the discussion ended on a strongly affirmative note. Both agreed that religion was a huge resource in a post-modern age all too sure it had the answers to everything; both wished to make common cause on this ‘darkling plain’ against specific evils such as human trafficking, and against the wider ‘long, withdrawing roar’ of the ‘Sea of Faith’.

Many of those present were moved by what they carefully avoided discussing. The choice of Vespers meant that divergent views on the Eucharist were not thrust onto the stage, nor were thorny issues such as the apostolic succession or the ordination of women. While the event avoided such traditional obstacles to unity, it showed that the two churches could pray and talk together, even in a royal palace. If it is true that the Defensor Fidei would have turned in his grave at the presence of a Cardinal of the church of St Alphonsus Liguori in Rome, Henry’s defence of the seven sacraments and of the faith of the catholic and apostolic church was as demented as his treatment of women. On 30 July 1540, two days after the execution of Thomas Cromwell, Henry VIII had three priests hanged for denying the royal supremacy, and three burnt for denying transubstantiation. As Sir John Harington wrote at the end of Elizabeth’s reign, the Crown had made four changes of religion in ‘little more than fourteen years’, all with more than a whiff of ‘necessary policy’. This was why ‘Faith and the Crown’, the title chosen for the event by John Studzinski, Chairman of the Genesis Foundation, was so appropriate. The reformation in England sprang more from political necessity than theological difference, substituted royal supremacy for papal supremacy, replaced the rood-screen with the royal coat of arms and the Blessed Virgin with the Virgin Queen. Both John Foxe (1516–1587), the greatest Protestant martyrologist, and Edmund Campion (1540–1580), the foremost Jesuit martyr, believed that academic disputation, and not persecution, was the answer to religious difference; Campion asked the Queen and her Privy Council for a public disputation with ‘the Doctors and Masters and chosen men of both universities’, and John Foxe obtained and preserved manuscript accounts of three of Campion’s disputations in the Tower. It is not surprising to find that Foxe also pleaded in several letters to the Council for Campion’s life. What both men passionately desired was serious theological disputation, but like the prophets in the Letter to the Hebrews, who ‘died according to faith, not having received the promises, but beholding them afar off’ (a mere four hundred years in this case), Foxe and Campion can only salute those who, like them, ‘desire a better, that is say, a heavenly country’, and seek it by viva voce discussion and a shared liturgy.

Jon Round, Chairman of the Choral Foundation, was responsible for the magnificent music that followed. The Sixteen, a choir that was originally formed in Magdalen College, Oxford by Harry Christophers, and the Genesis Sixteen, joined forces to sing Solemn Vespers of the Blessed Virgin in the Chapel Royal. The plainchant was sung with beauty and precision, and punctuated by polyphonic antiphons and a ‘Magnificat’ by Thomas Tallis (c.1505–1585). The organist, Matthew Martin, fittingly ended with an organ voluntary of his own composition, on the organ restored by the Choral Foundation: a tribute to its role in nurturing young musicians.

As the guests left Hampton Court Palace, now quietly freezing in bitter north winds, they could not help but feel that the evening in the Great Hall and the Chapel Royal was a landmark, which showed how far both churches have travelled. Of course, difficult doctrinal issues remain, but meanwhile we can talk, pray and sing together, and so unite the best elements in two great traditions of music and theology. John Studzinski believes that ‘there is nothing like direct personal dialogue in a shared space’; his belief was confirmed in a thousand ways by this memorable evening of committed theological discussion and soaring sacred music.

Gerard Kilroy is Honorary Visiting Professor at University College London. His most recent book is Edmund Campion: A Scholarly Life (Ashgate, 2015), a full biography of the Jesuit priest and martyr. He is currently a Visiting Professor at the Ignatianum in Krakow, where he is giving a course of lectures on five plays of Shakespeare.

A Short History of Lent