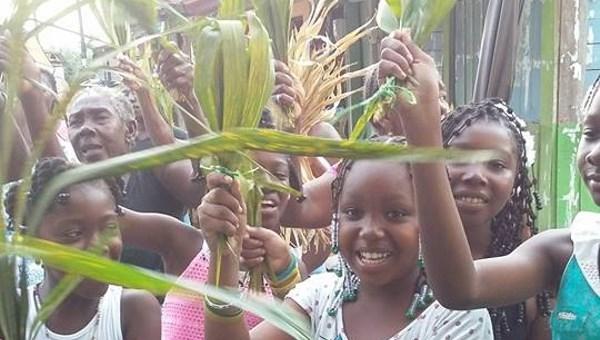 A team of two Jesuits in formation and two Maronite sisters, from Colombia, Ecuador, Mexico and Britain, travelled to the remote village of Managrú in Colombia to accompany the community in their celebration of Holy Week. A member of that team, Philip Harrison SJ, describes how he spent a Triduum like no other in the presence of a community devastated by poverty yet radiant with Easter joy.

Managrú surprised us from the start, appearing suddenly out of the dense jungle vegetation. The buildings were made of brick, wood and corrugated iron, neatly arranged around the Catholic church in the centre of the village. We climbed out of the pickup to be met by a crowd of cheering children streaming out of the church, waving branches of palms because they had just finished celebrating the liturgy of Palm Sunday. Along with the Mexican indigenous rights lawyer Luis Orlando Pérez SJ and two Maronite sisters, one from Colombia and one from Ecuador, I had come to accompany the community of Managrú in their celebration of Holy Week. I wanted to discover what the Passion and Resurrection of Jesus Christ meant for this poor community in an overlooked region of Colombia, to listen to their story and to be near to them in their struggle for dignity.

The department of Chocó lies on the Pacific coast of Colombia in an area of incredible biodiversity and natural beauty. Its main river, the Atrato, flows northwards though the village of Managrú towards the region’s capital, Quibdó, and onwards to the Caribbean Sea. With an annual rainfall of more than 13 metres, Chocó is one of the wettest places on earth and the climate is hot, humid and thunderous. The Afro-Colombian poet Jorge Artel wrote of a region whose ‘hours are deep and remote...constantly flogged by the lashing rain, electrified in dramatic flashes.’[i] Here, indigenous communities live alongside the descendants of slaves from West Africa who worked in the mines and plantations of the settlers. They fought for and achieved their liberty in 1851 and settled in this remote region of Colombia to maintain their unique cultural identity.

In spite of the rain, clean drinking water is scarce. The region is facing a humanitarian crisis because access to sanitation, health and education are not guaranteed for the majority of the population. According to government statistics, 68% of households in Chocó experience poverty, more than twice the national average; and 41% of households experience severe poverty, more than four times the national average.[ii] The government has insufficient resources to tackle this crisis. In communities that are permanently afflicted by this poverty, such as Managrú, the austerity of Lent means something different: it is a time for the people to rediscover the dignity of generosity, of helping a neighbour who needs food, medication or just someone to share their burdens.

The jungle surrounding the village hides a secret. In the beds of the streams and rivers lies hidden what Jorge Artel describes as ‘a mineral world of incredible treasures.’[iii] The artisanal mining of gold, silver and other minerals is the main source of income in the area, but it is unreliable: a day of panning for gold might earn the equivalent of three pounds or nothing, depending on your luck. However, this treasure is a double-edged sword because the mining turns the river a muddy brown, and the mercury used to extract the silver from its ore contaminates the water and poisons the fish. Further up stream, in the Andean Mountains, natural reservoirs or páramos are being depleted and contaminated by international mining corporations decimating the clean water supply of the villages in the region.[iv]

The richness of the natural resources of this region lures investment which leads to conflict. Mining companies, communities and paramilitary organisations compete for land and resources while the government lacks the capacity to administer a just system of allocation and environmental management.[v] In the struggle for land, whole communities are displaced from their territories in search of the basic necessities of life. The desire for the gold, silver and minerals that are used in the manufacture of your mobile phone drive a world market which directly impoverishes the lives of the already-poor. Without an international system to hold mining companies to account for the abuses of human rights, there is little that can be done to prevent the continual degradation of the environment and damage to communities such as Managrú.

The jungle hides other secrets, too. There are high rates of sexual violence[vi]; and there was not a family in the village that could not name a relative disappeared or killed in the ongoing conflict between paramilitary and government forces. Since the elections of 2014, the opposing sides have begun a process of reconciliation but the scars of years of conflict will be long in healing. Although trust will be difficult to rebuild, peace is becoming a real prospect for the people of Colombia. Still, the humanitarian crisis in this part of the world, like so many others, has been forgotten or ignored in the flurry of headlines. I could not help feeling that we had betrayed the people of this region, that the promises of Christianity had not been fulfilled here and that we had not taken responsibility for their plight. The biblical passage that kept surfacing in my mind came from the Passion of John’s Gospel: Judas eats with the disciples at the Last Supper and then leaves; John simply states that, ‘it was night’ (John 13:30).

This is the context in which the people of Managrú are able to enter fully into the Passion during Holy Week. We spent the first three days in the village working with groups of children, young people and adults to organise games, activities and catechesis for the children. With no school that week to keep them occupied, the church was full of the sound of children singing and shouting. Engaging with the older youngsters of the village was more difficult, so we encouraged them to come up with a rap and to take part in the dramatisation of the liturgies. In the evenings there were baptismal classes for the parents of the children who would be baptised that Saturday, and a popular reading of the bible for the adults of the community.

As we entered the Easter Triduum, the priest came from the nearest town to celebrate our only Eucharist of the week with the youngsters taking the role of the disciples at the Washing of the Feet. The community’s liturgical tradition tells the story of the Passion using actions much more than words, so that night the youngsters re-enacted the arrest of Jesus on the football pitch at the edge of the village. Looking at the faces of the crowd in the darkness, I saw that some of the armed police had joined us to watch the events unfold. It was then that I realised that this Easter would be unlike any other I had experienced. The faith of everyone here had been shattered and remoulded by their experience of poverty and violence, the emotion of the Passion all the more intense. The youngsters herded Jesus through the streets of Managrú, lit by the torches we borrowed from the armed police, with the villagers joining in the procession or watching from the darkened windows of their houses.

When daylight came we processed through the streets again, this time to follow the Way of the Cross laid out at different locations in the village. Again, the youngsters took the parts of Jesus, Mary, the Apostles and the Roman soldiers. Experiencing the Way of the Cross through the eyes of a people who had experienced their own suffering made each station all the more painfully real for me. The teenager who was acting as Christ wanted to carry the heaviest cross he could; ‘I want to make it real,’ he said.  When we finally arrived in the church after two hours, it was packed full of people of all ages praying for forgiveness, for their community and the whole Church. As the afternoon drew on, we started to prepare for the Veneration of the Cross, taking down the large wooden crucifix in the church, again with the help of the armed police.

After the Veneration, the figure of Jesus was delicately removed from the cross and placed in a glass coffin for people to pay their respects, then processed around the church. That night, the women of the village waited for everyone to leave before gathering around the broken body of Jesus and singing lamentations into the night. The women of this community are strong, like the female disciples in the gospels. They carry the faith of the community and make it their gift to the next generation of Managrú. Their song was a cry of anguish at the crucifixion but a cry also for their sons lost or disappeared in the conflict, for the communities displaced from their homelands and for the debilitating effects of poverty.

On Saturday morning, the priest came by motorbike from the town to baptise four children from the village, a sign of hope and great joy. The time for the Easter Vigil then arrived, but not before one final procession of Our Lady of Sorrows in which the women of the community processed around the village with a statue of Our Lady dressed in black, recalling her seven sorrows. In the absence of a priest, we were to celebrate the Easter Vigil with a Eucharistic service. The majority of the congregation were the children and youngsters who had dramatised the events of the Passion, their faces now illuminated by the Pascal Fire. In this community living with so much adversity, these were the faces of the risen Christ for me.

In Managrú, Easter is the celebration of Christ alive among us or it is not a celebration at all. Here, Christ is alive in the faithfulness of the community’s women and in the joyful faces of the young; in their hope for a better future and the explosion of joy at the news that Christ has risen from the dead.

Philip Harrison SJ is a Jesuit in formation for the British Province. He is studying Theology at the Pontificia Universidad Javeriana in Bogotá, Colombia.

[iv] ABColombia, Giving it Away: The consequences of unsustainable mining policy in Colombia (2012), p.7. http://www.abcolombia.org.uk/downloads/Giving_it_Away_mining_report_ABColombia.pdf

Beyond the pandemic: believe everything or deny everything?

Thinking about Christ’s Resurrection in the Year of St Paul