Skip to main content
Photo by Jwslubbock via Wikimedia Commons 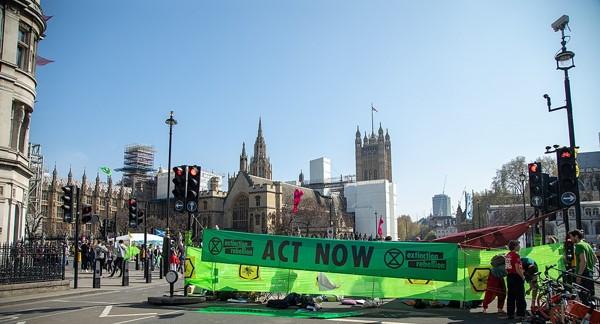 The recent Extinction Rebellion protests across London led to a prohibition by the Metropolitan Police that was subsequently ruled by the High Court to be unlawful. Patrick Riordan SJ uses the case to reflect on the common goods at stake in such protests. Among them is the culture of service in which people are motivated to accept personal risks for the good of all. This good in common needs to be protected.

In his criticism of modern attempts to justify the state in terms of the services and benefits it provides for its citizens, considered as its clients and customers, Alasdair MacIntyre points to what is in danger of being lost. If we see our states merely as providing security, healthcare, and the legal and institutional infrastructure needed for pursuing our private business or our personal careers or particular interests, why should we be interested in its wellbeing beyond its efficiency in delivering what we need? Such questions are crucial for those citizens who must put their lives at risk for the good of all, whether in the military, or police, or other emergency services. If there is no further justification for the state than its success in providing services, then, in MacIntyre’s terse formulation, it is as if the police officer or the soldier or ambulance driver is called upon ‘to die for the telephone company’.[1]

Our modern states depend on the willingness of some citizens to bear burdens in the name of the common good beyond what is asked of the general run of citizens, and their generosity is an essential contribution to the common good. To risk undermining this willingness jeopardises a major component of the social fabric of public order. The recent High Court judgment on the illegality of the police action that prohibited the continuation into a second week of the Extinction Rebellion protest could be seen to run this risk.[2] The ruling is in danger of undermining the willingness of the police to uphold the law and to deliver on the requirement that they protect society and its interests in accordance with the law.

The Justices of the Court ruled fairly and clearly on what is the law in the matter of the regulation of a public assembly, but the legislation itself lags far behind the reality of public protest and organised civil disobedience in the contemporary context. Putting it crudely, the protesters of the Extinction Rebellion movement are free to use social media on mobile devices to organise themselves and their constituent groups, directing them to various parts of a city to engage in various disruptive activities intended to draw maximum public attention to their cause. But the police officer in charge of implementing security may not use his mobile phone from a distance to prohibit planned disruption in various locations. The law as it stands, and as interpreted by the High Court, allows the police officer in charge to disperse an assembly for a good reason, only if s/he is present at the scene, and is responding to the current reality. The Extinction Rebellion autumn uprising ‘was not a public assembly in the presence of Superintendent McMillan on 14 October 2019 so that there was no power to impose a condition under the 1986 Act.’[3] The technology of social media allows protest organisers to be flexible and creative in causing disruption, while the law confines the police to seeing for themselves and broadcasting their prohibition through loud hailers (having put it in writing).

My intention is not to challenge the judgment of the court, but to demonstrate that MacIntyre’s challenge regarding the common good of a society, and the need for individuals to bear personal burdens and accept risks to their own wellbeing for the sake of that common good, comes into sharp focus in the light of this case.

In paragraph 16 of the judgment, the court presented what was agreed by the parties as the facts of the case. These included the following quotation from an Extinction Rebellion planning document: ‘it is vital that we continue to take disruptive actions outside of the large scale national actions that will necessitate a police response to further stretch police capacity. … We are following a clear strategy of taking police resources to a breaking point, so the only mechanism the state has to remove us is by engaging with us directly’.[4]

It was therefore explicitly acknowledged that the tactics adopted were designed to frustrate the police and to make their task as difficult as possible. No one is in any doubt about the present condition of police resources. Cutbacks in recent years have led to reductions in police numbers. Reports on various events such as the Westminster Bridge and Borough Market attacks have criticised the police for failing to monitor those suspected of terrorist sympathies; horror at the wave of knife crime leads to demands that police be more present on the streets; and growing reports of ‘county lines’ in the drug trafficking business raise even further demands on police engagement. ‘Taking police resources to breaking point’ is pouring salt in open wounds in such circumstances.

MacIntyre’s challenge provokes us to ask why any citizens would choose to expose themselves to such pressures. How great must be their commitment to the common goods of society and the country to be willing to risk mockery and ridicule as well as life and limb to take on the task of a police officer. What are those goods of communality, of sociability, that attract the willingness of personal sacrifice by those who offer themselves for service? Do these goods factor into the motivations of those who offer themselves for service? When planned activities – even those such as Extinction Rebellion that intend to promote the common good in terms of the future of society and humanity as a whole – set out to take police resources to breaking point, this not only undermines the willingness of officers to serve the common good, but it calls into doubt whether there are in fact goods in common uniting the protesters, the victims of their protests, and the police.

The law should be an instrument for the common good. In our common law system, the law grows and adapts incrementally as it responds to particular problems and learns what measures would have helped to avoid past failures. Unfortunately, this means that legislation is always just catching up. The 1936 legislation quoted by the High Court was enacted following the experience of dealing with Moseley and the British Fascists. That law dealt with ‘processions’, parades or marches, but not with meetings.[5] In the 1980s, legislation expanded to include ‘assemblies’ and the related problem of trespass.[6] The recent High Court judgment reveals how limited is the perspective of that legislation, which assumes there is a single scene, and that the police officer responsible can be present at that scene and can communicate her orders to the assembled gathering in writing. There is need now for appropriate legislation to manage the kinds of organised disruption – in whatever cause – which aims to bring a city to a standstill, and to push police resources to the limit. The fluidity of movement made possible by social media and the immediacy of coordination goes far beyond the circumstances envisaged by the laws of the last century.

Britain has a great history of facilitating public dissent. It has shown itself willing to accommodate peaceful protest, demonstrations and political rallies in various causes This tradition is part of our common good. It is to be valued and protected. It requires that the police attending any protest acknowledge the legal rights to protest and treat with respect the persons who take to the streets to make their case. On the other hand, it requires that those who avail of their legally protected liberties to protest treat with respect the police officers charged with preserving public order and the social good.  Rare episodes such as the miners’ strikes in the 1980s should remind us of the horrible consequences when mutual respect is lost and there is no longer a sense of common good at stake in the confrontation.

All the more, then, does maintaining this tradition require that Parliament enact appropriate laws so that the police have commensurate measures available to them to deliver on their acknowledged duties, to ‘prevent serious disruption to the life of the community’. The tactics employed by Extinction Rebellion will be emulated by others whose intentions are not so high-minded as the sustainable preservation of humanity in balance with its common home. The powers available to the police must be commensurate with those tactics, and must have the flexibility and effectiveness to facilitate peaceful demonstrations while protecting public order. The legislators must show respect for the common good by doing what they can to anticipate future problems, and all who take to the streets either as police or protesters must acknowledge the dignity of each other as contributing to serving common goods.

[5] Ibid. par. 14: ‘The demonstrations organised by Sir Oswald Moseley in the 1930s led to the 1936 Act. Section 3(1) of the 1936 Act conferred on the chief officer of police a power to give directions to persons organising or taking part in “any public procession”, imposing on them such conditions as appeared to him necessary for the preservation of public order.’

[6] Parliament’s intention as expressed in the cited White Paper was that ‘In order to prevent the imposition of conditions whose effect would be tantamount to a ban, the conditions which the police will be able to impose will be limited to the location, numbers and duration of a static demonstration. The police will not be able to prevent a demonstration from going ahead on the date and at the time planned by the organisers, but they will be able to impose conditions about its size, location and duration if they reasonably apprehend circumstances defined…’. (Ibid. par. 44).

The Tyranny of Merit: What’s Become of the Common Good?

Conservatives and the Common Good

After the General Election: a politics for all people