Skip to main content
Photo by Aslıhan Altın on Unsplash 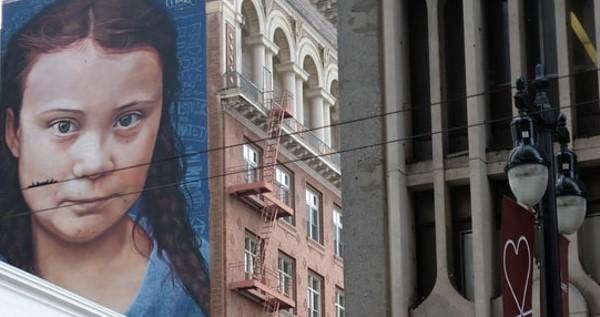 In this Season of Creation, we are celebrating the integral web of relationships that sustain the well-being of the earth. One of the most prominent voices in the ongoing drive to protect and restore those relationships is not a Christian one, but Niall Leahy SJ thinks it belongs to some whose life ‘corresponds in significant ways to the lives of holy people.’ The Ignatian Year that we are in the midst of gives him an opportunity to write to Greta Thunberg and invite her into a dialogue with Ignatius’s story.

I watched your documentary, I Am Greta,[1] and it really got me thinking. You are not a practising Christian and so what I am about to say may not resonate with you, but let me say it anyway. You are a person of good will and your life is a participation in the paschal mystery.[2] To be honest, I don’t fully understand that either. Of all the mysteries of the Christian faith, the mystery of Jesus’s sacrifice on the cross is particularly hard to get our heads around. But despite not fully understanding what happened, what it signified and why it was efficacious, I recognise that God’s saving grace retains the pattern of the cross: it is both mortifying and vivifying. This pattern of change is the sign of the paschal mystery at work in human history and I can’t help but see it in your life. I’m not saying you’re a saint, but your life corresponds in significant ways to Christ’s life and the lives of holy people. I will mention just three of those ways.

Accepting a life with limits and accepting reality as it is

I will start with the story of St Ignatius Loyola. Ignatius was a man of great desires and ambitions. He wanted to have everything and to be great in the eyes of men. Moreover, he saw the world as a place that would accommodate his ambitions. He was like today’s capitalist fundamentalists who want eternal economic growth and believe that the earth is an infinite source of natural resources that will support this project. They are delusional to think that the world will accommodate their ambitions.

An unexpected cannonball and a badly broken leg disabused Ignatius of his delusion. He could have easily fallen into a state of ressentiment. Despite the strong evidence to the contrary, he could have doubled down on his belief that the world really ought to conform to his infinite ambitions and dreams. If he had done so, he would have spent the rest of his days condemning the actual world for the crime of not being his fantasy world. He would have retreated from this ‘evil’ world and rationalised his isolation and misery with a perverted sense of justice. He would also have lost his agency, because in measuring the world against his illusory standards, he would have lost what power he had to change it for the better. Thank God this did not happen. As he came to accept the limits of his power and autonomy, he also came to accept the world as it was and not as he wanted it to be.

Greta, you have noticed that the cannonballs are already hitting us, and you have decided to put limits on your life and your autonomy. You travel on trains and boats, and you have sacrificed eating meat. Moreover, accepting these limitations has acted as a catalyst for questioning the fantasy world presented by some news channels, television shows and attractive advertisements. You are free to ask the question: ‘What is the world actually like?’ This is a precious question. It sounds strange but the reason you can change the world is because you are learning about and accepting the world as it actually is, not as you want it to be.

Practising discernment to deepen your agency in a moral world

Accepting the limits of your autonomy and accepting reality does not mean passively going along with whatever happens. To avoid this trap, we need to acknowledge another important dimension of reality: its moral dimension, which is also spiritual. Furthermore, we need to discover it in ourselves. When St Ignatius began to see and understand the moral and spiritual tensions within himself, he also began to see and understand them in the world around him. He no longer naively assumed that he and the people like him were the ‘good guys’. He became more sensitive to good and evil in himself and around him. He perceived two dynamics: the bad dynamic that seeks riches, honours and pride; and the good dynamic that accepts poverty, insults and humility. This crucial insight allowed him to deepen his agency in two ways. First, he was able to choose the good and resist the evil in himself, and secondly, he was able to join and support other people in the world who had chosen what was good. For him, the saints like Francis and Dominic exemplified the good, and he wanted to add his efforts to theirs in the Church.

Greta, you have also perceived these moral tensions, on one hand the greed and prodigality that always wants more, and on the other the sobriety and gratitude that is happy with just enough. Your conscience tells you which one is good and which one is evil. You also see this good and evil in the world around you. You see how individuals, communities, movements and institutions promote one dynamic or the other. I know you are a person of good will because you listen to your conscience, even when it says you should do something very difficult. You don’t have much power but there is more agency in doing a small good and resisting evil than in having all the power in the world to do evil. So by following the voice of your conscience you have deepened your agency. Your personal sacrifices, your acceptance of insults, your need for help, and your tears of joy and sorrow tell me that you are acting from a deeper place than those who are simply promoting ‘business as usual’.

Greta, you’re afraid that the nest will break apart and everything you cherish will be destroyed and nothing will remain. And you know, you’re right. The nest could break, and we could all be in big trouble. But I still have hope and I want to tell you why.

As you try to forge a just and sustainable material reality, you are also participating in a spiritual reality. We Christians call it communion. The spiritual reality you are forging, the good connections, dynamics and relationships, will endure, regardless of whether you succeed in your material project or not. Life shows us that good relationships are what really matter, because they do not depend on that material success.

Christianity reaffirms this truth. On the cross, human sin stretched Jesus’s relationship with the Father to its limits, beyond the constraints of his human body. But even in death their relationship endured, and he remained the Father’s Son. The resurrection shows us that their relationship is limitless and eternal. It survives every attack and disaster, and it cannot be broken. All people of good will are invited to live, die and belong in this relationship forever. This is our hope. So even if you don’t succeed in your mission, I want to assure you that none of your efforts have been wasted. Your courage and honesty, your dedication and your love will never be in vain. You have been weaving your own nest of loving relationships here on earth and it will endure in God.

If you ever get discouraged and you feel like you’re on the losing side, I suggest you read Jesus’s words in Mark 13. He tells us that in the midst of the worst destruction there will be signs that the very best is coming. The branches of the fig tree will soften when it senses the summer is near. The sun will reveal everything that endures, and I believe that even if the fruits of your work are not successful in this world, they will endure into the next.

Niall Leahy SJ is a member of the Irish Jesuit province and is a priest at Gardiner Street parish, Dublin.

[1] I Am Greta, directed by Nathan Grossman (Hulu, 2020) is available to watch on BBC iPlayer.

[2] In Gaudium et spes (1965), Vatican II’s Pastoral Constitution on the Church in the Modern World, Pope Paul VI writes about the participation of all people of good will in the paschal mystery: ‘since Christ died for all men, and since the ultimate vocation of man is in fact one, and divine, we ought to believe that the Holy Spirit in a manner known only to God offers to every man the possibility of being associated with this paschal mystery.’ (§22) This article is inspired by a reflection on that text and on the conversion of St Ignatius Loyola.

Prayer and discernment in lockdown