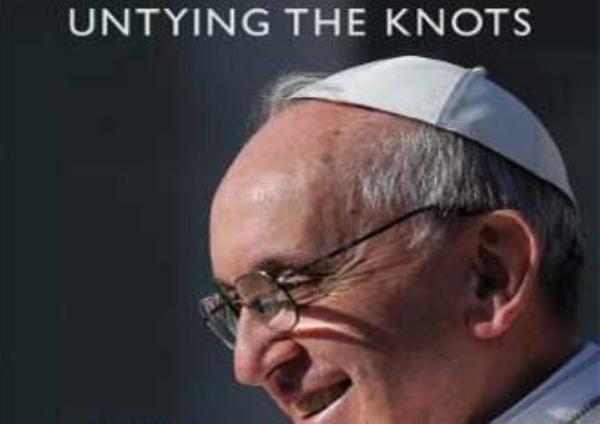 Benedict XVI’s decision to resign the papacy in February 2013 meant that the world’s introduction to Pope Francis took place in rather unusual circumstances. There was none of the respectful mourning that accompanies the death of a preceding pope to temper the frenzied speculation when Cardinal Jorge Mario Bergoglio stepped out onto the balcony. News organisations immediately began scrambling to get up to speed on the Argentinian Jesuit, and there has since been a rush by publishing houses to release books about this formerly unknown cardinal (at least outside of South American circles) who was called to Rome from ‘the ends of the earth’.

Of the new literature rushed out to capitalise on the great interest and the extraordinarily long honeymoon period that Francis is experiencing, Paul Vallely’s Pope Francis: Untying the Knots is perhaps the best in the English language. The only biographical account of Bergoglio published before the election, in any language, was El Jesuita by Sergio Rubin. This Spanish-language biography has the advantage over Vallely’s book because its source material is firsthand, acquired through conversation with the then-Cardinal Bergoglio. Vallely’s sources are secondary; the book was produced after a whistle-stop tour of Argentina, and perhaps is too reliant on a limited set of interviews with Jesuits and other companions of Bergoglio. Given the pressures of time, it is only to be expected that this would be a small pool, perhaps lacking the more prudent or cautious voices. However, working under considerable constraints, Vallely has done an impressive job.

The second part of the book’s title – ‘Untying the Knots’ – is a stroke of genius. It expresses succinctly but also with a certain profundity the challenge at hand. It refers to an image of Our Lady that Jorge Bergoglio SJ brought back to Argentina from Germany, where he had been sent for further studies after his controversial stint as Provincial of the Argentinian Jesuits. According to Vallely, Bergoglio’s time in Germany was unhappy; he missed his beloved country, especially his hometown of Buenos Aires. During this period of exile, he was struck by a painting of Our Lady Untier of Knots that he stumbled upon in Bavaria. The concept of Mary untying knots is derived from St. Irenaeus of Lyons, who presents a parallel between Eve and Mary, describing how, ‘The knot of Eve’s disobedience was loosed by the obedience of Mary. For what the virgin Eve had bound fast through unbelief, this did the virgin Mary set free through faith.’ This would have resonated with Bergoglio, reflecting on his bruising time as a young provincial in a country divided by a brutal military regime and a murderous communist insurgency. Vallely, with great insight, posits that this painting in some way represents the enigma of Bergoglio: a former provincial with a complicated legacy, but also a man spiritual and humble enough to recognise his mistakes and learn from them.

So the book is divided into two main ‘acts’ of Bergoglio’s life thus far: before and after Argentina’s Dirty War. It is rather cursory about his childhood, and there is little discussion about the future of Pope Francis. The focus is on Bergoglio the Jesuit provincial, and then Bergoglio as bishop and cardinal. It is both challenging and illuminating. Perhaps with one eye on the commercial advantages of releasing instalments in other publications, Vallely has already allowed excerpts to appear in The Tablet and The Times. Instalments demand headlines and a certain polemical tone, and I think Vallely may have sacrificed some impartiality to this requirement. The book perhaps is guilty of being overly critical of Bergoglio’s behaviour in the Dirty War period, which is grist for the mill of The Times, who were ungenerous with their reporting at the time of the papal election. It is easy to paint the young provincial as out-of-step with the other Latin American provinces in the heady post-Vatican II days, but that does not fit comfortably with a fascinating detail which Vallely, to his credit, also includes. The iconic Jesuit General Pedro Arrupe trusted and sent Bergoglio to intercept an ultra-conservative Spanish splinter-group of Jesuits who were coming to Rome to make demands that could have given rise to a schism. They were persuaded by Bergoglio to turn around and go back to Spain, thus preserving the integrity of the order, which is a source of pride to many Jesuits.

Towards the end of the first part of the book, the author starts to bring out many of the quiet, courageous and heroic acts of Bergoglio the provincial. They do appear as an afterthought, though, which gives some sense of the book being unbalanced. Perhaps this is a result of the inevitable temptation – particularly when trying to exploit a timely and possibly fleeting gap in the market – to write a contemporary biography with the cadences of a film script, appealing to the modern attention span with crises and cliff-hangers. However, I may be being too sensitive – as a Jesuit, I have become quite protective of the first Jesuit pope and maybe I lack a certain objectivity.

The second part of the book turns the corner and launches ‘the people’s bishop’: he leads a life of simplicity, poverty and integrity, and has the remorse and compassion of a humble man who is anchored in a daily rhythm of prayer. Now the dramatic arc of the screenplay of Bergoglio’s life takes an upswing, and there are faint whiffs of hagiography as the saint-in-the-making begins his ascent through the ranks of the hierarchy. A favourite moment for me is the account of the general congregation that preceded the conclave at which Bergoglio was elected and his influential intervention there.

Vallely is an excellent, well-connected writer, and Pope Francis: Untying the Knots is an engaging and thoughtful read throughout. He turns out to be a good ‘untier’ of the knots – or at least what seem, at a rushed first glance, to be knots. However, I also look forward to a second edition in a few years’ time, with a more nuanced tone at times and an updating of Pope Francis’ legacy – which will, I hope, include accounts of deep reforms in the Church.

The reviewer, Tim Byron SJ, is Catholic Chaplain to the Manchester universities.