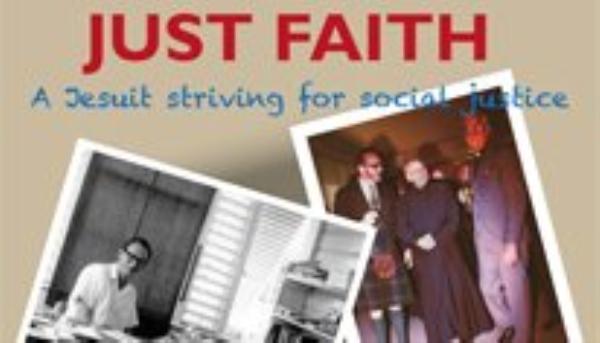 ‘Be ready at all times to answer anyone who asks you to explain the hope you have in you….but do it with gentleness….’ (1Peter 3:15-16). St Peter’s recommendation to the early Christians in Asia opens Father Michael Campbell-Johnston’s (known as Father CJ) illuminating account of his life’s work striving for social justice. Just Faith: A Jesuit Striving for Social Justice is compiled from the annual letters he wrote in the years from his ordination in 1964 to his second year in Barbados in 2004.

To look at Fr CJ now, you see a tall, grey-haired, bespectacled man, who has fewer years in his future than in his past; however, walking through his life’s journey with him in this book is a reminder that you see Christ in everyone you meet, and you certainly see Christ when you meet Fr CJ.

After his schooling by the Jesuits at St John’s, later at Beaumont, Fr CJ went on to study philosophy in France and economics at the London School of Economics. It may have seemed that he was heading along an altogether different career path, but once exposed to the existence and needs of the developing world, he soon understood and experienced St Paul’s claim that Christ makes us ‘rich out of his poverty’

Ordained in Mexico in October 1964, Fr CJ had found his vocation as a boy of fourteen and cemented it by writing a pledge on the back of a picture of Our Lady of Lourdes on 6 June 1946: ‘My dearest Mother Mary, today I solemnly consecrate you “La Bella Donna Della Mia Mente” and promise you that I will never marry but will hold you as the one sweetheart of my life. Please, dear Mother, may I be a priest…..’

Fr CJ’s priestly ministry was diverse. From dossing down in a storekeeper’s hammock in Guyana to be with the people, or being called to bless one of 27 rum shops where men were gulping down five-star Martel Cognac straight from the bottle; to witnessing the life of Amerindians in their settlement in the rainforest, or in the 1970s helping to work on the National Self Help Road Project to lay 355 miles of road from the capital of Guyana to its border with Brazil. 2,000 volunteers of all classes and colours spent two weeks clearing back the jungle with axes, saws, cutlasses and bare hands. Not the most economic way of building a road, but a project that must be highly commended for fostering a spirit of genuine cooperation and unity – a real Big Society in action.

Later appointments took Fr CJ to many places – he has travelled to over 75 countries spanning all the continents: to Rome as Director of the Social Secretariat in the General Curia (secretly wearing a kilt below his vestments celebrating Mass in St Peter’s); back to London as Provincial of the British Jesuits, and to address a Conservative Party Conference in Brighton in the 1980s on the topic, ‘Can a Conservative be a Christian?’; to Rhodesia (now Zimbabwe), where he was frogmarched by the authorities at the airport, searched, interrogated and being accused of being a communist and of not being a real priest; and to Haiti, many years before the 2010 earthquake, where even then he saw the most squalid poverty imaginable.

What was always central to everything he did can be encapsulated in the aims of a learning institution called Canefield House in Barbados, where he spent years teaching students from all over the Caribbean: ‘Enter to learn, depart to serve; as we leave here, we endeavour to do our best to help in the upliftment of our people’. Fr CJ, an example of Catholic Social Teaching in action throughout his life, did this wherever his ministry took him.

Fr CJ’s heart was truly with all of the oppressed that he encountered around the world. His work sometimes resulted in confrontation with corrupt Heads of State in countries that did not have the luxury of peace, democracy and freedom. In El Salvador, where he lived and worked for 11 years in the 1980s, he listened to the first confession of an eleven-year-old child who had been found lying under the bullet-ridden bodies of his mother, grandmother and three elder brothers. Looking straight into the eyes of Fr CJ, he said, ‘Padre Miguel, pray for me that I can forgive the soldiers who killed my mother and brothers. I don’t want to have hate in my heart.’

Of all those who entered Fr CJ’s life – among them, Father Pedro Arrupe, Father General of the Jesuits; Mother Theresa, who he met in Calcutta; Pope John Paul II in Rome; Nelson Mandela; and many others – none had such a profound effect on him as the six Jesuits, their housekeeper and fifteen-year-old daughter, and of course Archbishop Oscar Romero, all of whom were assassinated in El Salvador, all of whom were martyrs, willing to face death in the fight for justice.

This book chronicles part of the journey of the Catholic Church amidst the turmoil of a changing global society; the work for social justice of the Society of Jesus; and the purpose of a man who kept his boyhood promise to his sweetheart, who in turn answered his plea and granted his wish. At the end of his book, Fr CJ gives a reason for his hope for change in a world that has yet to really live out the Gospel message:

I strove for all since all were worth my strife
God I loved, and next to God, mankind;
All that I have and am I gave to life,
It sinks, but now a fuller life I find.

This book, which is a delight to read, will bring a tear to your eye and a smile to your lips. It will appeal to your sense of our purpose as Christians. Read, absorb and enjoy – but if it can also encourage you to ‘do more’ then I think Fr CJ would be proud to know that his work, our work, the work that Jesus asked of us, continues into this challenging 21st century.

Find this book on the Way Books web site

The Martyrs of our Modern Church