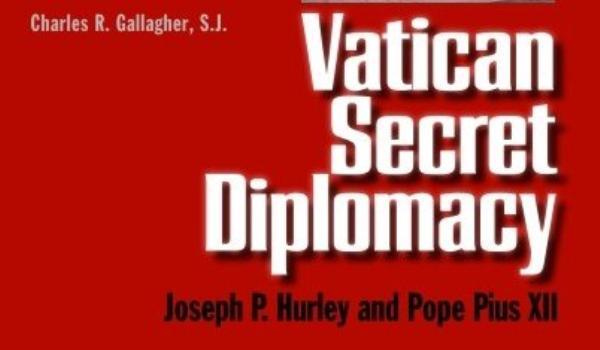 Charles Gallagher, currently studying theology at Heythrop College, won the American Catholic Historical Association's prestigious John Gilmary Shea Prize for 2008 for this monograph, the second book to emerge from his doctoral thesis on the diocese of St. Augustine (Florida).

An almost casual invitation from Edward Mooney, appointed apostolic delegate to India in 1926, introduced Joseph P. Hurley into the world of Vatican diplomacy. Hurley emerged from an immigrant Catholic ghetto eager to demonstrate its strength ('muscular' Catholicism) and its allegiance to American principles (the 'blessed harmony') in the face of still strong, strident anti-Irish, anti-Catholic prejudice. The former dictated his 'eyeball to eyeball' confrontational style; the latter, his framework for interpretation. At Mooney's side he observed the success of a diplomacy rooted in inflexibility first in India and then in Japan. In 1934 he started his work in the Vatican's Secretariat of State.

Hurley established close (perhaps too close) relations with the American ambassador in Rome, William A. Phillips. Indeed, he became Phillips's 'man at the Vatican'. Immediately before Hitler's visit to Rome in May 1938, Hurley anonymously wrote an editorial for L'Osservatore Romano: 'there are now two crosses side-by-side in Rome . . . the cross of Christianity and crooked cross of new-paganism' (p. 75). Through Hurley, the British and American governments convinced Pius XI that fascism was a greater threat than communism. Hurley summarised this argument thus: 'If you have two enemies, and one of them is holding a dagger to your throat, you have to take care of the enemy holding the knife before you try to defeat the other' (p. 76). Hitler did not meet Pius XI so the latter's plan of 'icy confrontation' was not implemented.

As Mussolini cracked down on freedom of the press, the American government used Hurley to get its news, reports, and views into L'Osservatore Romano. By publishing verbatim material provided by the US State Department, Hurley de facto converted the Vatican newspaper into an organ of American propaganda. In July 1939 the Italian government demanded that the newspaper cease publishing anti-Fascist material. Hurley's persistence led to Fascist reprisals. But Pius XI's death in February 1939 had left Hurley without a protector.

As the world eased towards war, Hurley saw the upcoming conflict in quasi-eschatological categories. Pius XII's advocation of impartiality was, at root, immoral. Hurley believed that the new Pope was missing the point as he abandoned the confrontational style of his predecessor. Despite papal preferences and after Italy's entry into the war, Hurley broadcast an interventionist, pro-Allies speech on Vatican Radio in July 1940. In Summi Pontificatus Pius had recommended prayer and mortification during the war; in this broadcast Hurley urged Catholics to fight for justice! On 13 August 1940 Patrick F. Barry, Bishop of St. Augustine, died. Three days later, and astonishingly quickly by anyone's standards, Pius nominated Hurley to the post. From a much smaller podium, Hurley continued to preach his interventionist views with facts and figures provided by the Roosevelt administration.

Hurley's removal from Rome, according to Gallagher, illustrates the timeworn principle promoveatur ut removeatur (promote in order to remove). Granted that Hurley's role as the voice of America in the curia and on Vatican Radio, and his outspoken promotion of interventionism on the side of the Allies, clashed with Pius XII’s policy of impartiality, but was this difference the sole reason for his transfer to a backwater diocese? Did not Pius tolerate Hurley's newspaper articles and radio broadcasts? Could fear for Hurley's personal safety or anxiety regarding his close identification with American interests have been factors? Once the danger had passed, Pius did indeed recall him to Rome.

Despite their differences, Pius appointed Hurley as acting papal regent to Yugoslavia in January 1945. Brought in out of the cold, Hurley reverted to his confrontational diplomacy in his battle with Marshall Tito. With the imminent defeat of fascism, communism regained its status as the Church's principal enemy. In Hurley's eyes there were no gradations of communism so Tito was no different from Stalin, any attempt to prove otherwise was 'so much dust in the eyes' (p. 183). With firm American support, Hurley won some battles over the imprisonment and execution of Croatian Catholic collaborators. Hurley also vigorously defended Archbishop Aloysius Stepinac, who was found guilty at a controversial trial of many crimes including collaboration with the Nazis and forceful conversion of Orthodox Serbs to Catholicism. In this campaign, Hurley had Pius's full support. Indeed the Vatican excommunicated any Catholic involved in the judgement against the Archbishop. But on this issue the United States remained silent, perhaps out of a hope to wean Tito from Stalin.

Hurley returned to Florida in 1950. Not only had the United States failed him, but he suspected this failure resulted from communist infiltration. Haunted by the spectre of communism, Hurley become increasingly reactionary. He viewed the changes in the Church during the pontificate of John XXIII with hostility. The Church had become soft on communism, and Hurley reprimanded the Council for their strong defence of Jews while neglecting imprisoned Catholics such as Stepinac. He dismissed contemporary theologians: 'The clerical "teen-agers" are jubilant about their victory. Like the Sisters they behave like bobby-soxers. Scream at every call for freedom–every clamour for youth. They are followers of Küng, Rahner, et al., as American girls were of Sinatra. . . Hans Küng is to theology what Elvis Presley is to music' (p. 220). Because of Hurley's influence, Martin Luther King made overtures to him when the civil rights leader targeted St. Augustine in 1964. Hurley refused public support; he remained sceptical of the civil rights movement because of its demonstrations and civil disobedience. If he had lived, one wonders how he would have reacted to the public protests against Humanae Vitae, and clerical involvement in the anti-Vietnam movement.

Journalists and historians have not been kind to Pope Pius XII over the past forty years. Earlier accolades, for example Golda Meir's 1958 comment 'During the ten years of Nazi terror, when our people went through the horrors of martyrdom, the Pope raised his voice to condemn the persecutors and to commiserate with their victims' (cited in Examining the Papacy of Pope Pius XII [New York, 2008] p. 139) have been brushed aside and ignored definitely post hoc and probably propter hoc the production of Rolf Hochhuth's Der Stellvertreter (The Deputy [or The Representative]) in 1963. Apparently this is another triumph of literature over history, comparable to the portrayal of Sir Thomas More in A Man for all Seasons. The book under review makes an important contribution to the debate. Gallagher may be criticised for a one-sided, post-Deputy interpretation that maximises differences between Pius XI and Pius XII, minimises Pius XII's efforts, and juxtaposes Hurley's 1943 denunciation of 'orgies of extermination' with papal silence, but in the author's defence he is simply explicating Hurley's perception of Pius XII, which is more or less compatible with Hochhuth's. But has the author underestimated how Hurley's patriotism may have prejudiced his perceptions? Why was Hurley so uncritical in his acceptance and use of data provided by the State Department? Was he so certain of America's moral rectitude? Bishop Hurley may have been dwarfed by the taller pope in the photograph on the dust jacket, but Gallagher elevates the status of this hitherto little-known American prelate whose importance and influence extended beyond wartime Rome.

The reviewer, Thomas M McCoog SJ is the Archivist of the British Province of the Society of Jesus.