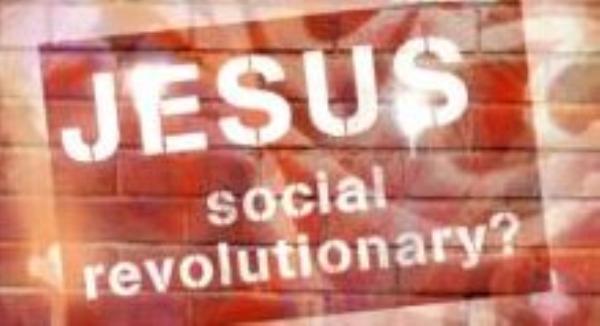 There’s renewed interest in Jesus ‘the revolutionary’.  In a recent book for the Verso series on revolutions, intended to be “classic revolutionary writings set ablaze by today’s radical writings”, Terry Eagleton opens Jesus Christ: The Gospel with: “Was Jesus a revolutionary? He certainly kept some shady political company…” Eagleton, though, concludes that Jesus was not a zealot, or his disciples would have been arrested after his death. He writes:

Had they been known insurrectionists, the Roman forces would almost certainly have moved to mop them up.  There may have been a sprinkling of anti-imperialist militants among the disciples, but the Roman authorities seem to have been clear that the Jesus movement was not out to overthrow the state.  This is not why its leader was crucified. Indeed why he was crucified is something of a mystery.

In Jesus: Social Revolutionary?, Peter McVerry also addresses the mystery of the Crucifixion.  Why was Jesus crucified?  How exactly did he upset the Jews and the Romans to the extent that they crucified him?  Crucifixion was after all a distinctively Roman practice, one reserved for political sedition, an act of symbolic public display implicitly addressed as a grim warning to an audience.  McVerry suggests that regarding Christianity either as a personal code of moral obligations or about believing a set of facts about Jesus leads us into an understanding that is “inherently individualistic”, a matter of personal belief “with little or no economic, social or political consequences.”

McVerry’s book is a Gospel-centred lead-in to the mystery of Jesus’s crucifixion that builds up chapter by chapter, like episodes in a series of reflective talks at a retreat for non-specialists, taking his listeners through the scripture passages (notably printed in red and indented so that it is impossible to flick over them). The book becomes a shared reflection on Gospel passages that he refreshes with commentary. Whether it is the story of the rich man and Lazarus, the Good Samaritan, or of the labourers in the vineyard, he opens our eyes to read the text again with new insights. The Our Father, for instance, as McVerry spells out, is a prayer of the poor and can hardly be recited by the rich.

And why was Jesus crucified? McVerry goes further than Eagleton here. “I believe,” he says, “Jesus was put to death by good people acting for good reasons, because the God that Jesus revealed had radical consequences for ordering behaviour and structures of society, consequences that threatened the existing order of society.” From the outset, Jesus healed the sick, associated with undesirables and ate with social outcasts.  These social categories – the sick, the poor, and public sinners – were despised groups, marginalised because their own society believed God had marginalised them, regarded literally as “outlaws” (undermining by their lives and presence the observance of the Law).  By associating with sinners (meaning not simply those who occasionally broke the law, but those who broke it in a flagrant and systematic way), Jesus was consorting with the “wicked”.  He didn’t wait for them to repent and change before he sat down to eat with them (challenging the authority of the Law of Moses) and even more scandalously he starts to let these excluded groups know that God has a special love for them.

As McVerry puts it: “Jesus affirmed their dignity by the way in which he himself related to them. By reaching out to them in a respectful and dignified way, he communicated to them a sense of his own dignity in the face of the contrary message that they were continually receiving from society.” In essence Jesus said to them “society may not want much to do with you, society may look down on you, but I and the God from whom I come, we acknowledge your dignity, the same dignity as any other beings in society.” He challenged the attitudes of society that look down upon such people and challenged the structures that kept them in their marginalised place. And it was his affirmation of their dignity that by his association with them led Jesus himself to become marginalised and rejected.

McVerry’s writing is rooted in his work among the homeless of Dublin. The Gospel challenge is to “Ireland today”: “The poor are those groups who our societies are pushed aside, unwanted, rejected, marginalised. We can identify them with the question, “Who do you not want living beside you?”  In the Irish context he states that “affirming the dignity of every human being as a child of God, travellers, homeless people, drug users, and offenders, is a challenge to the conventional thinking of a society that feels insecure and is often afraid and so wants to keep them apart.”  McVerry points out that “there are more homeless people than there were before the Celtic tiger began. There are still travellers living on the side of the road often denied suitable accommodation by the refusal of the settled community to allow them access to housing or serviced sites…our prayer, our fasting, are of little value to God if we have ignored those of God’s children who suffer on the margins of our societies.”

But it is not just that “caring today is often a political act”. McVerry takes us into the deep theology of “a God of compassion” – opening the kingdom to those locked out, “who have no good works to trade in, whether we regard them as deserving or not”. He relates how he is frequently asked by young homeless people, usually when things are going wrong, “You won’t give up on me, will you?” As McVerry sees it, we are invited by Jesus to “be compassionate as your Heavenly Father is compassionate” (Mt 5:48), to care for people unconditionally, and move with Jesus into a solidarity which “we no longer decide to whom we will and will not reach out”, but work to alleviate their suffering at whatever cost to ourselves.  It is a dangerous road to take.

Inevitably “to challenge the structures, policies, or financial resource allocations that benefit the comfortable is to risk the wrath of those who have too much to lose.  To live the Gospel of solidarity, to be driven by the passion of Jesus for an end to poverty and exploitation and the building of a world of justice and peace that reflects the vision of God is not for those who want a quiet life.”  Being called to take up the cross and follow Jesus has economic and social implications and could lead us out into the margins.  The Gospel message is “be there”.

Find this book on the Veritas web site

Outside the City
A Little History of Poetry
Co-creators of a better world
Prayer and discernment in lockdown
Laudato si’ and Covid-19: Can praises still be sung in a strange land?