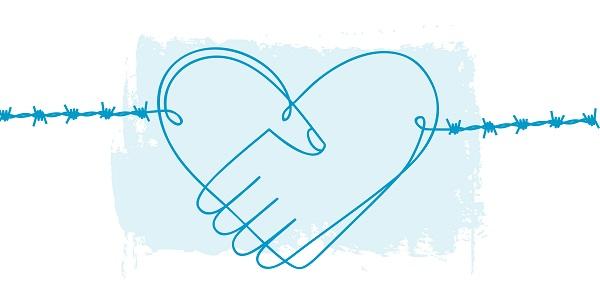 The government’s proposed changes to the asylum system in the UK will only serve to perpetuate the trauma and injustices that friends of the Jesuit Refugee Service have suffered as a result of the current practices, argues Sarah Teather. This Refugee Week, she shares the experiences of some of JRS UK’s refugee friends and asks us to imagine what an asylum system that has people at its centre would look like.

Cecile fled political violence and imprisonment in West Africa. When she claimed asylum in the UK, she was faced with decision-makers who seemed to want to find reasons to disbelieve her: ‘During my asylum interview, I thought everything went well … but I think there were some traps behind the questions that I didn’t realise. I explained everything to them. I told them about the ordeals that I had been through.’ She was refused asylum, and explains that the impact was crushing: ‘My refusal was really death. I could see death ... I told myself they’d deport me back to my country. I was so afraid. My blood pressure went up. I couldn’t even eat.’ Her case was refused because she hadn’t been able to remember the dates of important events exactly: ‘I had been so confused myself that I couldn’t give the correct date.’ After this initial refusal, she struggled in the asylum system for years, experiencing extended periods of destitution. Eventually, she was recognised as needing protection. The years in limbo represented pointless suffering, years of a life that could have been so fully lived.

Cecile’s experience is not unusual. Again and again, we at JRS UK see that people who have come here in search of safety and security are retraumatised, denied protection and dehumanised. They explain how years of enforced poverty, destitution and marginalisation erodes their sense of self. In research conducted by Dr Anna Rowlands, one explained: ‘The system treats you like rubbish, so you come to feel like rubbish’. People held in detention, having fled here to escape brutal regimes, regularly describe the experience of immigration detention as a second torture, with one telling us: ‘You go somewhere where you think it’s safe, and they put you through the same process …They don’t have to put you in detention. They put you back in the same situation ... Putting someone in detention is a kind of torture … you take it with you all your life.’

This is what asylum seekers in the UK experience at the hands of a system that is supposed to be there to protect them. There is something deeply wrong with our response to those who seek sanctuary on our shores. When we treat people like this, we reveal that we don’t really see them as human – not as human as us, as those we love, as those we deem ‘like us’. I’m reminded of Pope Francis’ warning in Fratelli tutti: ‘No one will ever openly deny that [migrants] are human beings … by our decisions and the way we treat them, we can show that we consider them less worthy, less important, less human.’ This is painfully prescient in our current context.

The government plans to overhaul the asylum system. Central to its plan are proposals to create further barriers to protection; penalise people for arriving spontaneously, though most refugees have no choice in how they travel; correspondingly deny many people the chance to settle here even after their need for protection is acknowledged; increase the use of detention in the asylum system; and create more asylum ‘reception centres’ likely to be comparable to the infamous Napier barracks. Our asylum system is in urgent need of reform. This is not it. We need to rethink our approach. JRS UK’s recent report, ‘Being Human in the Asylum System’ seeks to do this by approaching the system from the perspective of Catholic Social Teaching.

In ‘Being Human’, we argue for an asylum system with human dignity and protection at its heart, one that supports asylum claimants and refugees to participate fully in our communities and have a chance to rebuild their lives. This ought to be obvious, as protecting refugees is the ostensible purpose of the asylum system, yet something has gone very badly wrong. To recover a commitment to protection at the core of the asylum system, we need to reorient our thinking on asylum.

First and foremost, we need truly to see and hear asylum seekers, to create a context where we encounter each other as human beings. Overlooking people makes it easier to mistreat them. If you don’t really acknowledge someone, you don’t need to acknowledge the human or moral implications of cruel policies. You don’t have to think about what it means for them to be incarcerated indefinitely in prison-like conditions – as in immigration detention – or crammed into overcrowded, unsanitary and uninhabitable accommodation during a pandemic. Furthermore, a failure to see and hear people is closely connected to a failure to protect them: a hermeneutic of suspicion and culture of disbelief have long warped the decision-making process. Similarly, policies that make it harder for people to obtain protection – like many in the government’s new proposals for asylum – are often grounded in the assumption that people are lying. Hence, the ‘New Plan for Immigration’ is very concerned that the system is ‘open to gaming’. If you start from this perspective, you are unlikely to hear or understand what someone has to say, and you risk missing something important. We need to start, as Pope Francis suggests in Gaudete et exsultate, with the faces of our sisters and brothers, with ‘the face of God reflected in so many other faces’.

This suggests that our response to those seeking asylum thus requires reorientation on another, connected level. Rather than thinking about migrants and refugees as a potential threat to be dissuaded where possible and otherwise tightly controlled, we should think in terms of common humanity and human need. Those seeking sanctuary on our shores are people with histories and families, hopes and fears, and we often forget it because we are so blinded by a rhetoric that focuses evermore single-mindedly on the urgent need for tighter border control. Further, as people, they are connected to us, we share a common humanity. We would want to be welcomed and treated with dignity if we were forced to leave our homes. We have a moral duty towards those in need of protection. ‘Being Human’ suggests that we should think about our asylum system in these terms, and move away from concerns about limiting migration when thinking about our duty to refugees.

Letting go of our defensiveness and being open to human beings from beyond our borders opens us up to think about an asylum system that actively supports people to flourish and values the gifts they bring; one that places them at the heart of communities and allows them to participate in civic, social and economic life. This thinking is framed around good things. It involves seeking our common good, asking what is good for human beings and society, and how we all share in it together. This is a much healthier approach than one that wields hostility as a tool of control. It is capable of comprehending a lesson that the pandemic has made powerfully clear: the welfare of one of us is connected to the welfare of all. This is not a zero-sum game, in which the only way to protect our society is to visit deliberate cruelty upon a relatively small number of vulnerable people forced to flee their homes. How we treat the most vulnerable and respond to those in need tells us something about who we are. Cruelty is bad for us all. Human suffering hurts everyone. Our asylum system is grounded in a culture that overlooks human persons, and tells a story that divides us. It is time to tell a different story.

Sarah Teather is Director of JRS UK. You can download 'Being Human in the Asylum System' in full, watch Sarah in conversation with refugees about the asylum system, and speak up for a human-centred asylum system at jrsuk.net/being-human

A week is a long time in politics