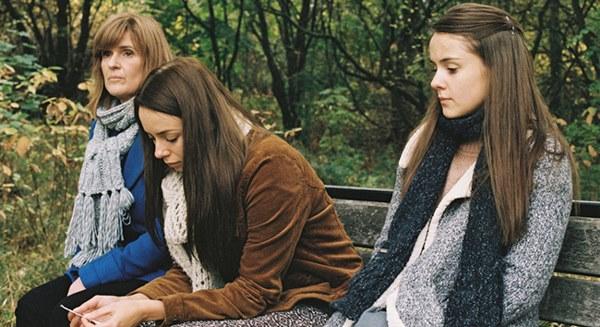 Film watching has often been recognised for its therapeutic effects, whether it be the escapism that such an immersive experience can give, the cathartic release of emotions that storytelling facilitates or just the insights into human nature that well-developed characters provide.  Filmmaking can also be therapeutic, as seems to have been the case with Apostasy. It is written and directed by a former Jehovah’s Witness, Daniel Kokotajlo, who still has a complex relationship with the community he has forsaken. This complexity is interestingly represented in the film, which gently and almost lovingly exposes the cruel pressures that exist in such a community. The film, which revolves around the trauma of ‘disfellowship’ (what Catholics may refer to as excommunication), is carried by strong performances from a trio of female leads: Siobhan Finneran, Molly Wright and Sacha Parkinson. The drama is played out against the dreary background of Oldham with its rainy streets and bland interiors, not least the Kingdom Hall that reflects a belief system that is hanging on for a new world order, which is imminent. There is no iconography to distract, no stained glass to lift the spirit. The occasional storm skilfully evokes the inner turmoil that rages within the characters.

Finneran plays the devout Ivanna, a mother of two teenage daughters, whose life revolves around the Witnesses.  Her saintly younger daughter, Alex (Wright), still at school, opens the film with the ‘confession’ that she had a life-saving blood transfusion in early life, something that is seen as an unholy impurity by the community. She is still dangerously anaemic and is seen in conversation with a worried doctor who is happy to treat her again without informing her parents. ‘Blood is the life force,’ according to her mother. Witnesses refuse transfusions due to a particular interpretation of Acts 15.  What the film lacks is a theological interrogation of these controversial beliefs; instead, it focuses on the strains that such beliefs impose on the community and the cognitive dissonance that it generates.  For young Alex, the psychological impact of having to carry the shame of a transfusion is brought home in a scene where she is shown reading the lives of other young children who chose death rather than transfusion and who are extolled as models, pseudo-martyrs, for having given their lives fully to Jehovah.  Part of the attraction of Alex’s character is that she has a wholesome earnestness coupled with an unusual humility that comes from a sense of being in spiritual deficit. Her older sister, Luisa (Parkinson), who is at university, has been polluted by student life and shows a dangerous independence of thought, developing opinions that bring her into conflict with a patriarchal hierarchy of elders. However, worse is to come when she announces that she is pregnant, and she is disfellowed when she chooses to live with her lover rather than keep on the narrow path to righteousness.

A sociologist of religion would point out that the strength of the identity of a sect is often relative to the amount of evil it views in the world around it, certainly in other ‘corrupted’ forms of religion, let alone the godlessness of a secular world. Catholicism, for example, is dismissed as ‘wishy-washy’ by Ivanna at the beginning of the film. But her faith is tested as her daughters pull away in tragic circumstances, and her struggles are the focus of the film. Finneran’s performance shows great versatility. One of the most memorable scenes is when she walks out of a sermon, a thinly veiled attack on her wayward daughter, to seek solace in the ladies’ room, only to hear the unrelenting sermon come over the speaker system in the toilet.  It seems that escaping God’s word is very difficult as a Jehovah’s Witness – although not impossible.  In a Q&A with the director after the film, the crowded cinema seemed to be full of ex-Witnesses. It had the feel of a survivors’ meeting and was clearly therapeutic for many of them.  Kokotajlo admitted that while he was technically ‘inactive’ as a witness, he hadn’t been disfellowed and his family were still ‘in the truth’.  Maybe it was this that prevented a more rigorous examination of the beliefs.  From an outsider’s perspective this is a shame, it could have made a good film into an excellent film. Nonetheless, his deft touch and torn loyalties ensure that it avoids clichéd stereotypes.

Kokotajlo’s film was a finalist for the first feature award at the 2017 BFI London Film Festival, and on the eve of the festival he received the 2017 IWC Filmmaker Bursary Award which comes with a £50,000 grant. The bursary is for an emerging UK-based writer and/or director premiering their first or second feature at the London Film Festival.