Skip to main content
Photo by +Alan at flickr.com 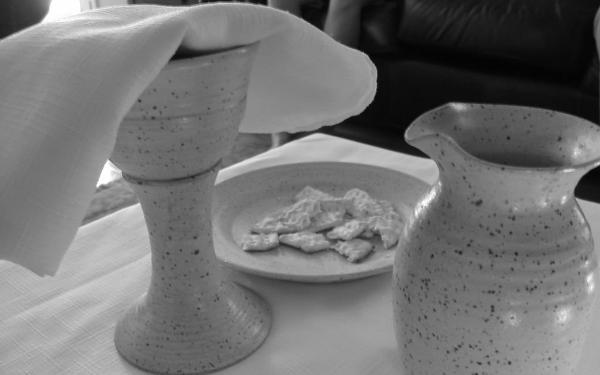 We heard from John’s Gospel on Christmas Day that ‘The Word was made flesh, and dwelt among us’, and through this flesh we learned to call God ‘Abba’. Gerry O’Mahony SJ reflects on how we recall the gift of the Incarnation through the Eucharistic gifts at each Mass.

We tend to forget that the name Christmas comes from two words: ‘Christ’, for Jesus as Messiah, and ‘Mass’. Just as Michaelmas was the day the Mass was celebrated in honour of St Michael the Archangel, and Michaelmas daisies still bloom on that day, so also Christmas is the day when the Mass is celebrated in honour of Christ’s birthday, the day Jesus was born into this world.

The Christmas feast day has for centuries had a link with the notion of giving and receiving gifts. Christ, like a good Samaritan, had no duty to come and pick up damaged humanity at his own expense, but he did that: he came to be born as one of us and to share our life’s burdens. That was his gift. And Christmas is the day on which we remember when he first became present among us.

Not only that, but he so completely changed places with us that we in return are invited into his world, the eternal world he came from. There is a beautiful little prayer on this theme, said quietly each day of the year as part of the Mass of the Roman Rite. ‘By the mystery of this water and wine, may we come to share in the divinity of Christ, who deigned to become a sharer in our humanity.’ In the Roman rite it has always been the custom to have a cup of wine mixed with water in preparation for the Eucharist. For centuries, until 1970, a fuller version of the same prayer was used every day: ‘God, you have wonderfully established the dignity of human life and have even more wonderfully re-created it; grant to us through the mystery of this water and wine, that we may become sharers in the divinity of Christ, who humbled himself to become sharer in our humanity.’

The picture given by these prayers is clear. Water, in this gesture of mixing, stands for human nature as it was before the first Christmas; wine stands for the divine life brought by Jesus. The imagery has to be that way round: we cannot imagine human life as the wine and divine life as water. We might as well picture Jesus at the wedding feast in Cana changing all the available wine into water! God’s Son took on our ‘water’ nature, and gave to us human beings the means to take on his ‘wine’ nature.

Once the gifts are all on the table for the Eucharist, and before any words of consecration are spoken, there are not two but three symbols present: bread to symbolise the body of Jesus, water to represent the human life he took on in that body for our sake, and wine to represent his divinity. The Son of God took on our bread-and-water life, and gives us in exchange an invitation to take on his divine wine. All this fits in with the way St Paul speaks about the way his early Christian believers are constituted: he speaks of them as comprising ‘spirit, soul and body’, and those three elements add up to the whole person (1 Thess 5:23). ‘Body’ is the solid part of us, only alive when the ‘Soul’, the human life, is present. ‘Spirit’, then, is the priceless gift that Jesus brought into our world. Bread, water and wine: human body, human life, divine life.

We may link in here what Paul writes about Spirit. For him the Holy Spirit is the spirit of adoption by which we cry out ‘Abba!’, ‘Father!’ (Romans 8:14-17; Galatians 4:6) Using the imagery of the gifts, then, we might say that the wine stands for the Spirit through which the receiver is able to stand in the relationship of child-to-Abba.

What is the full picture, then? Before the coming of Jesus, we did not relate to God as our personal Abba. In the history of the world, Jesus was the first to call God by that intimate, friendly, trusting name; he would in his teaching ministry teach us to do the same. Praying on our own, like Jesus we are to pray ‘Abba, my Father’ (Luke 11:2, Mark 14:36). Together with others we may pray ‘Abba, our Father’ (Matthew 6:9). This may sound simple enough, but praying like this means a total shift from believing in conditional love on God’s part, to believing in unconditional love and forgiveness guaranteed from God. Such is the love of the father of the Prodigal Son in Jesus’s parable, a parable told as a lesson for those who were unwilling to find a place in their hearts for sinners (Luke 15:1-3).

Back to Christmas. Back in fact to March 25, the date nine months before Christmas, when we really celebrate the Incarnation. On Christmas Day we read John’s gospel prologue: ‘The Word was made flesh, and dwelt among us’ (John 1:14). But for nine months already the Word had been quietly taking our flesh to itself in Mary’s womb. Surely Luke is telling us something real, when in his gospel he quotes the angel as saying, ‘The Holy Spirit will come upon you, and the power of the Most High will overshadow you, Mary, and so the one born of you will be called holy, the Son of God’ (Luke 1:35). From the first moment of Jesus’s incarnation, the Spirit was with him, the Spirit which as soon as he learnt to speak he would instinctively call God: ‘Abba! My father!’ The same Gospel of Luke has Jesus at twelve years old quite comfortably calling God, ‘my Father’: ‘Did you not expect to find me in my Father’s house? I was not lost’ (Luke 2:49)

To say ‘The Word was made flesh’ may seem ridiculously easy, but for years I have been cross with all the reams of theology about ‘the Word.’ My simple heart always wants to say, ‘What particular word do you have in mind?’ Likewise when I was a child it annoyed me to be taught about grace, that ‘grace is a supernatural gift of God, freely bestowed on us for our sanctification and salvation.’ That left me no wiser as to what grace was. It was decades later that I discovered grace to be a relationship: sanctifying grace being the basic relationship as child of God, and other graces being whatever strengthens the bond with God. So, what word is the Word that was made flesh, rather than just remaining a breath breathed out without recognisable meaning? ‘Why not Abba!?’ is what occurs to me. In the Trinity, the Son must have been calling the Father Abba! or the divine equivalent from all eternity, and the relationship was two-way. Jesus, born, then draws us into the same relationship. Jesus is born in the flesh along with that relationship.

The basic relationship was given ‘a local habitation and a name’ by Jesus when he established baptism as the normal means of our entry into his divine family. John the Baptist was already baptising, calling on whoever would listen, to confess that they were sinners, to ask God for forgiveness, and to be immersed in the River Jordan. He regarded his baptism as a half-way house to the baptism that was to come, from the one whose way he was preparing. When Jesus came to be baptised, there were three extra elements which came to be incorporated in his style of baptism (Mark 1:9-11). First, the heavens were seen by Jesus to be split open: there were no barriers between God and the one baptised. Secondly, the Holy Spirit came in the form of a dove, like Noah’s dove that came with an olive branch (Genesis 8:11). Thirdly, Jesus’s baptism establishes the one baptised as beloved child of God, unconditionally loved and forgiven. There can be no unconditional love without unconditional forgiveness. To say, ‘I will forgive you anything, so long as you do not do so and so’ is not unconditional love at all. Hence, Christian baptism is the normal way Jesus would have passed on his divine life to sinners, and again the Holy Spirit is in there, giving the baptised one the ability to call God, ‘My Abba!’

So while we could think of March 25, the Annunciation to Mary, as the Incarnation proper, on Christmas Day we commemorate the day Jesus came out of Mary’s womb and saw the light of day for the first time; but he brought with him a light infinitely more beautiful, a light he would spend life and death sharing with the rest of us.

Gerald O’Mahony SJ is a retreat-giver at Loyola Hall Jesuit Spirituality Centre, Rainhill. He is the author of many books, including A Way in to the Trinity (2004).