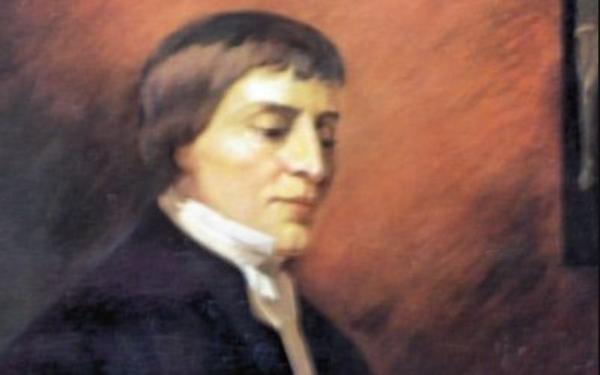 It was on 29 August 1794 that the first students arrived at Stonyhurst College, the Jesuit school in Lancashire. Among their small number was Count Augustin de Neuville, who later became a great friend and benefactor of the Sisters of Our Lady of Charity of the Good Shepherd. Sr Anne Josephine Carr r.g.s. visited Stonyhurst to find out more about de Neuville, and she tells his story here. How was a lifetime of generosity inspired by the Jesuits at Stonyhurst?

My reason for visiting Stonyhurst was to see if I could discover anything about Count Augustin de Neuville and to see where he had been at school. I knew that Augustin had come to Stonyhurst from Liège with his teachers when the school was forced to relocate from Liège and during my visit it was revealed that, at Stonyhurst, he is remembered only as one of the select group known as the ‘The Twelve Apostles’.

Just who was Augustin de Neuville? He has been listed variously as ‘Augustin de la Potherie’ or as ‘Augustin le Roy’ and there is so much confusion over his name that you will hardly ever find it in the school register. His full name was in fact Augustin Le Roy de la Potherie de Neuville. His Normandy family can be traced back to the beginning of the fourteenth century. I will not go into all the family details prior to the end of the eighteenth century except to say that in the intervening four hundred years the family acquired land and titles through marriages.

His parents, Pierre Le Roy and Marie-Innocent Jeanne Baptiste de Lantivy were married on 4 October 1769. Augustin was born in Angers on 28 February 1779, by which time his parents’ first three sons, Louis, Pierre and Cyr had all died. In November 1792 he was sent to the Jesuit College in Liège in present-day Belgium, where he stayed until the Revolution caused the College to close and he came to England in 1794, the journey taking six full weeks. He thus became one of the twelve pupils – the ‘twelve apostles’ – who became the very first Stonyhurst boys by travelling there directly, whilst the remainder visited their homes first and came to Stonyhurst later.

As a young student, what struck him was the care the Jesuits at Stonyhurst took of their pupils, including those who had no money with which to pay for their board, lodging and tuition, of which he himself was one. During his time there, the de Neuville family were completely impoverished, having lost everything during the Revolution. He remained at Stonyhurst until 1797 and the register shows that his fees were paid by ‘the Trustees’.

He later recounted to Mother Pelletier, foundress of the Sisters of the Good Shepherd, an experience he had had at Stonyhurst that demonstrates just how poor his family had become. One day, after having had the misfortune to break the glass he used at table, one of the servers said to him severely: ‘Sir, he who breaks the glasses pays for them!’It was a trivial accident, but it inspired a major decision, for Augustin did not have the money to pay and he did not even know if his family, at this time, could give it to him. Being a very sensitive boy, the server’s reprimand upset him deeply and he had to be consoled by his masters. He always remembered with gratitude the priests who had understood that day just how embarrassed and upset he was and had comforted him, and from that moment he decided never to refuse to help the poor, saying: ‘My dear masters consoled me with a kindness which I remember gratefully. That very day, I promised God that I would never refuse to give alms.’

Later on, he would always speak with great veneration of the Jesuit Fathers, his masters, their science and their doctrine, and his personal library was rich in works of the Society of Jesus, not only in French but in Greek, Latin, German and English. He was known to say that, of these, his favourite language was English and, later in life, he often wrote in English to the first English-speaking Sisters of the Good Shepherd, sometimes ending the letter with a little poem.

We are not quite sure where Augustin went after he left school, but we do know that his name and that of his father figure on a list of émigrés who returned to Maine-et-Loire between 1802 and 1804, after which his family recovered almost all their assets and were thus at last able to pay his Stonyhurst school fees.

A short time after their return from exile his father died and his mother decided to set up a house for ‘fallen women’ in Angers. Madame de Neuville now knew from experience what it was like to be poor and without resources. She knew that women suffered greatly and were at the mercy of unscrupulous moneylenders and the like. But, before she could set up this house, Madame de Neuville died on 6 November 1827, leaving in her will 30,000 francs to be used for this work. In February 1828, Augustin passed on the 30,000 francs, after adding a further 8,000 francs of his own, to the Bishop of Angers for the opening of a ‘House of the Good Shepherd’. To appreciate the size of this gift, it is sufficient to know that the daily pay for a worker at the time was 4 francs. The House of the Good Shepherd was finally opened in 1829. It was confided to the care of the Sisters of Our Lady of Charity, an Order dedicated to helping women and girls in distress, which had been founded by John Eudes, a priest from Normandy. The sisters came from their house in Tours to set up the house in Angers.

In 1831, Sr Mary Euphrasia Pelletier arrived in Angers as the new superior of the house. She would remain there until her death in 1868. Under her leadership, the community separated from the Sisters of Our Lady of Charity and formed a new group – the Sisters of Our Lady of Charity of the Good Shepherd – and communities founded from the Angers house spread throughout the world. Both Orders still exist and still work for women and girls in distress. The focus is on trafficking, prostitution, migration and all the other evils that beset women in poverty. John Eudes became Saint John Eudes in 1925 and Sr Mary Euphrasia became Saint Mary Euphrasia in 1940.

One last gift must be mentioned. Mary Euphrasia wanted to build a chapel for the sisters and girls. She drew up plans for a small building with about 60 places. Augustin looked at them and said: ‘Madame, tear up these plans and draw up new ones; know that you will have more than 300 sisters here.’ Mary Euphrasia did as she was told. To pay for this chapel, Augustin sold his family home, the Château de la Fresnaye and he would say later that this gift cost him more than all the rest.

Augustin not only provided materially for the Good Shepherd, he had a clear idea of its mission and did not hesitate to tell Mary Euphrasia who to accept and who not to accept as candidates for the religious life. But this great benefactor of the Good Shepherd never wanted any mark of distinction. Mary Euphrasia had wanted to put the de Neuville arms on the walls of the convent, but Augustin wrote: ‘Madame, In the name of the friendship we bear, renounce the plan of which you did me the honour of speaking. Otherwise you will force me to break with you which would be very sad for me.’ And so it was not done.

Augustin’s generosity led to his becoming so poor that he was forced to eat off tin plates, having sold all his silverware, and he died in December 1846, in a room with broken tiles on the floor. Augustin and Mary Euphrasia were great friends and at the Mother House there are more than 700 letters he wrote to her, providing details of daily life, news of the neighbourhood, health worries, and details concerning the life of one or other of the sisters. He did not need his arms on the walls of the Mother House. He is remembered to this day with affection and gratitude by Good Shepherd Sisters all over the world and many of the programmes we run bear his name.

In his day Augustin Le Roy de la Potherie de Neuville had great veneration for Stonyhurst, and Stonyhurst should be rightly proud of this fine man that the early Fathers produced.

Sr. Anne Josephine Carr is a Good Shepherd Sister. She is a trained social worker and spiritual director. She spent eight years at the Congregation's spirituality centre in Angers and is currently a member of the Congregation Council.

This is an edited version of an article that first appeared in the 2010 edition of The Stonyhurst Magazine (now The Stonyhurst Record) and is re-published here with permission.