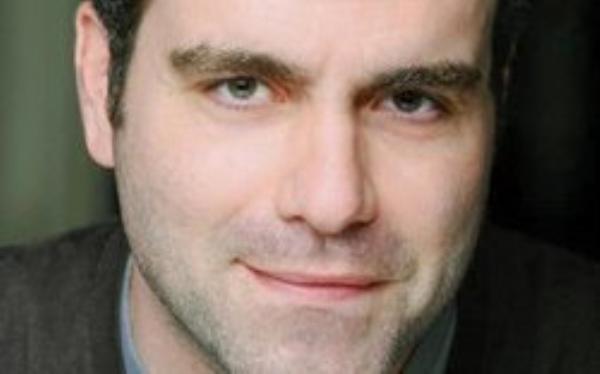 Have you heard the one about the Jesuit doing stand-up comedy at the Edinburgh Festival Fringe? With just one performance remaining of his show, ‘Learning to Pray in Front of the Television’, Jake Martin SJ tells Thinking Faith what it has been like to take the stage at the world-famous arts festival.

‘The Fringe? What’s that?’ My formation director looked at me with a wrinkled nose and a similarly creased brow.

‘Only the world’s biggest arts festival,’ I sighed, rolling my eyes heavenward. As I usual I was the teenager in the dialogue, asking for the proverbial keys to the car, with my formation director playing the reluctant parent.

‘Well,’ my formation director exhaled with the force of a defective air mattress being stepped on by an elephant, ‘if you must do this “fringe” thing, then you must, though it sounds more like a celebration of terrible leather jackets from the 80s than an arts festival.’

That was all I needed and I was off.

I’ve known about the Fringe – the Edinburgh Festival Fringe – for years. As a young comic in Chicago, I would always hear about one or two acts going over to Edinburgh in August every year. It has a rather mythical status in the States and most comics I know have made the trek across the Atlantic at least once. I hoped to get to Edinburgh one day, but how I wound up getting there was just a little bit different to what I had anticipated.

I expected to go to Edinburgh and perform at the Fringe, of course. I just didn’t expect to go as a vowed celibate, three years away from ordination. You see, I am a Jesuit. A member of the largest Religious Order in the world (at least that’s what the pamphlets said when I went to join up). I entered the Society of Jesus in August of 2004, having spent my years before entering working as a comedian.

Like so many comedians before me (and after), I worked my tail off hoping for my ‘big break’ to happen. What occurred was something a little different. As my friends began to ‘make it’ in show business I began to see that the whole life of a performer was not a linear one wherein you set a goal and achieved it and then you were happy; rather the life of a comic is circular, and by that I mean that it never ends, there is always another carrot on a string dangling in front of you, just in the way of true happiness. I learned that satisfaction in show business never comes; at least it never comes from the outside. What I wanted from my career in comedy was an external fix to a problem that was entirely internal. I thought that once I ‘made it’ then I would be happy; the problem was – and this I observed with my friends – that once you got that job, that TV programme, that film deal, that book offer, whatever it was, that it wasn’t enough. There was always something else, something more to achieve, another thing to prove. There was always one more obstacle standing in the way of true happiness.

I began to re-evaluate my life and priorities and God began to take a more prominent role. Eventually God became the primary figure in my life and it was then that I seriously considered becoming a priest. I considered numerous options: diocesan, Franciscan, Dominican, but it was with the Jesuits that I felt truly at home. They loved that I was a comedian and didn’t dissuade me from continuing with my passion.

In my eight years as a Jesuit I’ve had numerous opportunities to perform: I’ve done stand-up in New York and Chicago, I’ve been a part of several comedy troupes and even written a book about my rather unique vocation story (What’s So Funny About Faith: At the Intersection of Holy and Hilarious [Loyola Press, 2012]), but the Fringe wasn’t even on my radar. And then I went back to school.

For my Regency assignment (Regency is the period between Philosophy Studies and Theology Studies in which a Scholastic works full time in a Jesuit ministry) I taught theatre and theology at a high school just outside of Chicago. Unbeknownst to me, every two years the school took a group of theatre students to perform at the Fringe. I was asked to be a chaperone. Of course, I leapt at the chance and so it was that two years ago I had my first experience at the Fringe, as a high school teacher chaperoning a group of rambunctious American teenagers through the chaotic streets of Edinburgh.

That first experience in Edinburgh left me amazed and wanting more. To me the Fringe encapsulated so many of the remarkable components of Ignatian spirituality. God was ubiquitous: from the performers on the streets baring their souls for the love of art, to the fellowship found in the thousands of people coming from all across the globe, uniting in Scotland just for the opportunity to express themselves. Lives were being changed and perspectives were shifting whether it be through the work of the world-renowned comedians or through the joy being had in the performances of even the most anonymous of souls.

I wanted to return, but as a performer. I wanted to immerse myself in the experience of the Fringe, to be a part of this enormous and ever-growing arts festival. And so I created a show, on the cheap, getting up at 4am to write before teaching, working with the guidance of some remarkable friends such as Bill Cain SJ, a very prominent playwright back in the States who helped me come up with a narrative arc for several disparate monologues I had written.

I did all of this with no expectations of stardom or financial gain and with the wonderful support of my province (Chicago-Detroit), and arrived in Edinburgh on 9 August scared out of my wits. I never had a chance to preview my show back in the States—time just ran out—so my show would be making its world debut at the Fringe. No pressure.

The Jesuits at the Lauriston Community in Edinburgh have been beyond hospitable and supportive (almost all of them have seen my show even though it starts way past their bed time at 10:15pm) and have laughed at all the appropriate moments. The show hasn’t knocked it out of the park in terms of audience numbers, but then I didn’t expect it to. I’m an unknown American comedian with little publicity or word of mouth backing me up, appearing for the first time (and a limited one at that: just eight shows) at the Fringe.

What has been most remarkable about the experience has been the friends I have managed to make in the fewer than two weeks I have been in Edinburgh. The Fringe is a bit of a pressure cooker and as such you quickly develop an esprit de corps with your fellow performers. I have all sorts of new chums that I have made while flyering (the desperate, yet necessary waving of flyers in the face of potential audience members to sell your show) in front of the half-price hut. I have also made some great friends in the form of the various performers and technical crew working at my venue. Besides that, just the people of Edinburgh I have encountered while flyering or at the Sacred Heart parish have been absolutely disarming, gracious and hospitable at every turn.

Some people have asked me whether I find the whole aspect of flyering and performing before small audiences difficult to handle, but in truth, I sort of love it. This was the experience that I wanted to experience at the Fringe: to be one of the many, performing before an audience with the hope of changing hearts and minds. While the agendas may vary from performer to performer, the intent is always the same: to alter the audience’s perspective and offer a different look at a world they think they already know.

Jake Martin SJ is a scholastic of the Chicago-Detroit Province of the Society of Jesus. The final performance of his show at the Edinburgh Festival Fringe, ‘Learning to Pray in Front of the Television’, takes place on Monday 20 August at 10.15pm at Gryphon Venues at the Point Hotel. Please click the link below for tickets and further information.