Skip to main content
Photo by revger at flickr.com 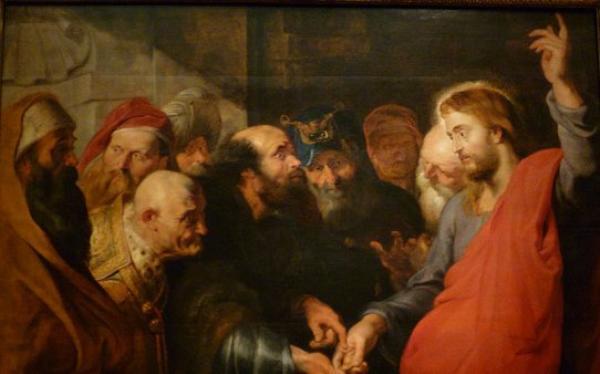 The account of Jesus’s discussion with the Pharisees and Herodians regarding the question of paying taxes to Caesar will be read to us from Mark’s Gospel on 5 June. Dr Marion Smith encourages us to ask ourselves what Jesus’s response to his challengers demands of us as members of society.

At times, it can seem as if some churchgoers are indifferent to what is happening in society and show little interest in the wider world. By such neglect their personal faith does little to counteract injustice, inequality or dishonesty in public life. The Church has a wealth of valuable insight and experience to contribute to public debates, but often such contributions from church leaders or individuals within the Church are labelled as intrusive. Religious faith, it is said, is a private matter and believers should confine themselves to their own sphere of influence. So those inside the Church as well as those outside seem to accept a separation of religion from public affairs. How can we account for this situation? And should it continue?

A partial explanation may be found in our country’s history. From the time of the Normans, monarchs asserted their power gradually as being superior to religious authority and the culmination of this endeavour is found in the Reformation. The strength and unity of the kingdom was thereafter believed to depend on unified worship controlled by the monarch as the head of the national Church. Royal control loosened over time as dissenting groups became less politically threatening, and these groups (which included Catholics) were assimilated gradually into society. Now they enjoy the same civil and political rights as everyone else but the folk memories of imprisonment, torture and execution linger on. It was safer in times of persecution to keep a low profile and that habit endures.

The Enlightenment acted as the passage of change from ancient and medieval ways of thought to what is now spoken of as Modernity. There has been a growing insistence on the individual’s right (even duty) to shape his or her life in whatever way he or she chooses; obligations towards others have received rather less attention. As a result of most people putting their own interests before consideration of public responsibility, the cohesion of society has become weaker and there is a deficient sense of the common good.

We live now in a secular society. Each person can further his or her own interests through a democratic system of government which, in theory, allows everyone to express their choice as to how society is organised and defended. There is freedom to follow a religious way of life but this is generally regarded as a private matter. It is thought of as a personal interest and pastime, much like golf, amateur dramatics or bridge. Clergy and their congregations are expected to keep out of the way and mind their own business when it comes to political debate.

Our history and the development of our understanding of the role of the individual in society give partial insight into the tendency of believers to separate the affairs of state from those of the Church. To support this position reference is often made to an episode in the Synoptic Gospels when Jesus is asked about paying taxes to Caesar (Mark 12:13-17, Matthew 22:15-22, Luke 20:20-26). Mark records that this question was put to Jesus towards the end of his time in Jerusalem by some Pharisees and representatives of Herod’s party, both of whom were critical of Jesus’s position with respect to the issues of the day. These two groups were normally opponents of one another – the Pharisees were strictly devout whereas the Herodians, who owed their position to Roman government, sat rather lightly to Jewish law – but both had reason to try to discredit Jesus. They agreed to set a trap.

The framing of the question invited a simple answer: ‘Are we or are we not permitted to pay taxes to the Roman emperor?’(Mark 12:14). A straight ‘Yes’ or ‘No’ would set Jesus against one or other of the two groups. He could seriously offend the Pharisees who resisted the intrusion of Roman government into their nation’s affairs, or he could encounter difficulty with the Roman authorities. (According to Luke 23:2, this incident was twisted to form an allegation against Jesus in his trial before Pilate – ‘We found this man opposing the payment of taxes to Caesar.’) Jesus, however, gives far more than a clever or slippery answer. The issue is raised above parties or alliances.

The coin Jesus asks to see had stamped on it the image of the emperor, the authority behind the currency, with the inscription: ‘Tiberius Caesar, son of the divine Augustus, great high priest’. In the context of the Jewish religion a second image comes to mind. The coin bears the image of Caesar and man bears the image of God. We have two images of two authorities, the one incomparably superior to the other.

‘Let us make human beings in our image, after our likeness, to have dominion over... everything that creeps on the earth... So it was’(Genesis 1:26-30). The creation narratives were influenced in expression by the mythology of Persia encountered during the Exile in which the king was often called the image of the deity, a form of address adopted by the Roman emperors. In Genesis, royal language is used for human beings when they are given dominion over everything and this responsibility is also indicated when Adam is told to give names to every living creature (Genesis 2:19).

An explanation of what is meant by the words ‘image of God’ is not provided directly in Old Testament scripture. We discover it by observing the qualities attributed to God, particularly in the psalms and prophets. God’s justice and mercy, wisdom and power are mentioned again and again. So it follows that human beings, if they live as they have been created, in the image of God, will also show these qualities in their actions and attitudes. As we know, and as scripture shows us, we constantly fall short of this ideal. What belongs to the image of God that we are meant to reflect is blurred and at times hardly recognisable. Repair, reconstitution, re-creation became necessary.

In the New Testament we have a hymn of the early Church which says of Jesus Christ ‘He is the image of the invisible God’with the primacy over all creation (Colossians 1:11-20; cf. Hebrews 1:3, ‘He is the radiance of God’s glory, the stamp of God’s very being’and 2 Corinthians 4:4, ‘Christ who is the image of God...’). This is very like the words and thought recorded in Genesis with the creation of Adam. In the New Testament, Jesus is described as the Second Adam. That is, he represents authentic humanity. He shows us what human beings were meant to be when they were described as being made in the image of God.

By the end of the first century the baptism of believers into Jesus’s baptism (rather than John’s) was understood as bringing about a new creation. Baptised Christians were the new body of Christ in the world. Jesus’s followers were empowered to become renewed and so to live as images of Christ who was the image of God.

How does this consideration of the phrase, ‘the image of God’ help us to explore the narrative of paying tax to Caesar? Jesus’ reply to the question lifts the dialogue far above the immediate circumstances, and, as is usually the case, we have to decide the application for ourselves for our own time.

In the answer Jesus gives, two ‘deities’ are mentioned — one has the self-given title, the other has it, so to speak, by definition. But they are not equals who should have our acknowledgement in equal measure: the Roman claimed to be ruler of the whole known world; God is both creator and sovereign but not by his own assertion. Therefore, whatever is rightly given to God must encompass whatever is given to Caesar, a ruler who is under God, no matter how much power he may claim for himself.

How does this become reality? Even if our lives can be divided into separate compartments, the way in which we think and act will be unified by our recognition that we are made in the image of God, just as other human beings are. Just as the first Adam was given dominion over all things, so every Second Adam with a renewed humanity in Christ has wide responsibility. There is no justification for standing aside from involvement in the affairs of our neighbourhood, nation and the wider world.

Our society has developed a variety of services and institutions for the protection and well-being of its members. Such provision enables the majority to live in freedom from want and with possibility of fulfilling their aspirations and potential abilities. This costs money. Probably very few pay tax with enthusiasm, but it is a way in which we contribute to the common good. The parallel with paying tax to Caesar is not exact, but the Pax Romana had many advantages. Peace rather than war did much to allow society to flourish.

If we pay tax we want to have some say in ensuring the fairness of how the money is collected as well as in its distribution between numerous claims. To do this satisfactorily, voting has to be taken seriously. This is how we exercise responsibility. Some hold back from this, recognising that politics involves compromise. A particular political party or candidate may not in every respect uphold the values we think are important. But the alternative, refusing to vote, is also the refusal to support the good that is possible.

We also have a responsibility to be well-informed. Proposals ought to be accepted only after their effects on all sections of society have been considered. Investigation into causes and means of prevention need to accompany generosity towards those stricken by disaster. Choosing policies of collaboration rather than competition would be ones more likely to enable human flourishing in a peaceful society.

The prophets of Old Testament times had much to say about the character of society in their day and some were close advisers of the king. They did not stand aside from involvement in contemporary society. The Pharisees found in the prophets a vision of God intervening at some time, in a dramatic way, to put right all that was amiss in society (Amos 5:18-20, Isaiah 2:12-22, Joel 2, Malachi 3). What they did not imagine was that it was to be through a human intervention, which we call Incarnation. Nor did they realise that a renewed humanity would be tasked with renewing society.

The instruction to ‘Give to Caesar what belongs Caesar, and give to God what belongs to God’ invites us to live wholeheartedly as participants in our society, working to promote the well-being of all. In doing so we are trying to reflect a sharper image of the invisible God.

Dr Marion Smith lectured in Religious Studies at Roehampton and has published numerous articles on biblical themes and faith development.