Skip to main content
Photo by crsan – christianholmer.com at flickr.com 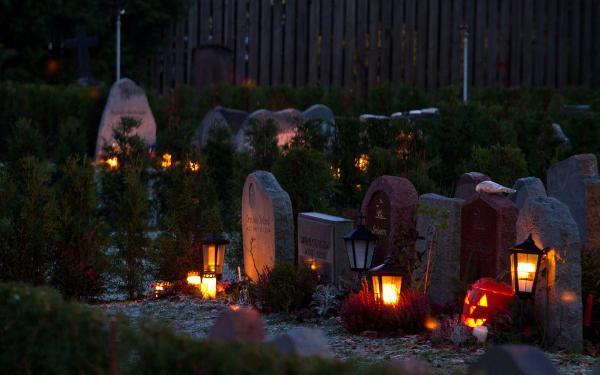 The sight of crowds of people dressed up as ghosts, demons and monsters will be a familiar one this coming Halloween weekend, but what is the real tradition of All Hallows’ Eve and how has the Christian vision behind it been distorted? John McDade SJ reclaims the truth about our death in Christ that informs our doctrine and our imagination.

In our culture, the rituals which shape the year are eating and shopping binges at the end of December, something to do with rabbits and chocolates in the Spring, and a celebration of horror and pseudo-violence on the last day in October. In central London on Halloween, you will see people with whitened faces like ghouls, red gashes on their throats, hints of fangs round the mouth, fishnet tights and cloaks, a world of vampires and characters from the Rocky Horror Show.

The real tradition of All Hallows’ Eve is that before the day of holiness, there is a crack in the fabric of the cosmos which allows evil spirits from the underworld to assault us: at that point in time, we are vulnerable, as traditionally we are vulnerable at the moment of death and need the name of Jesus to be spoken to us loudly because hearing is the last faculty to go and the devil needs to be outshouted in the name and power of Jesus. And so, on All Hallows’ Eve, people are meant to go out into the streets in scary costumes and make loud noises to frighten the devils away and to enact annually the victory of holiness over evil. It is a mythological extension of the themes of the Easter vigil, but who tells you that now? No one. We are to outshout the devils and cast them back down to their captivity in hell, and that’s what All Hallows and its eve are about. It is both Christian and mythological, and I want you at this point to see that there is such a thing as Christian mythological thinking which is significant and truth-bearing.

But the underpinning of this religious vision has gone now: how Halloween is now celebrated comes from how Hollywood imagines the forces of evil, and the young people on the streets and in the clubs imitate the images from horror films they have seen. They evoke demonic presences that no one takes seriously in any ontological sense, but have an imaginative power that derives from the world of digital reality, and in popular imagination death-dealing demons, robotic killing-machines and seductive vampires have taken the place of metaphysical evil. (In the Christian vision metaphysical evil is only what comes from the twisting of human and angelic freedoms. Creatures go wrong through the exercise of their freedom; evil is a twisting of the will, a by-product of freedom, not a feature within the natural order. This is why one can say in all seriousness that death is not evil because it is a feature of the world’s order that that expresses the divine nature.[1])

It could be argued that these days only in the world of fantasy do people have the sense of struggling against evil, only here do they take seriously the possibility of the innocent being vindicated, the demand for retributive justice being met, wrongs being righted and the possibility of an ultimate victory over evil and extinction. Themes that used to be part of a Christian world-view, and still are, surface now in a debased form without any real significance for the lives of those who imaginatively enter this world of fantasy. No behaviour is significantly altered: that’s what characterises pseudo- or false religion. You do not have to live differently, ethically, to enter this world and enjoy the frisson it offers.

People’s imaginative and spiritual lives still deal with vulnerability, forces that might destroy us, the imagining of a horizon of justice in which wrongs are righted and evil dealt with, but in many cases they continue outside the Church in deformed ways. There is a mutation of genuine Christianity in some, perhaps many, aspects of popular, post-Christian culture. What is the cult of celebrity if not a re-working of the cult of the saints that lies at the heart of the doctrine of the Church and Purgatory, in which we never get to heaven alone?

Can I suggest that many young people might be more familiar and comfortable with the idea of the undead than with the topic of resurrection? During the annual Halloween celebrations, there is no victory over evil, nobody is killed, nobody is really frightened by it all except a Jesuit who is scared by the lack of serious religious vision behind the whole thing and wonders whether there can be again a horizon of ultimate seriousness underpinning human life. Will a real metaphysical seriousness be possible to us again? This is a deeply Christian question as we watch cultural mutations that mimic religion and, in a sense, make proper religion unnecessary for many people in this country.

I remember a conversation with one of my colleagues who said to me, ‘What does it matter? In the end, you die alone’. I said, ‘No, wherever you are and whatever the circumstances of your death, you always die in the Church. There is no such thing as an isolated death any more than there is such a thing as an isolated person if it is true that through the Incarnation, the Son of God has united himself with everyone. We all die in Christ.’ I think I was being very Catholic in this conversation and he was being unnecessarily isolationist in his view of human beings, a difference both of temperament and theology.

Now if I’m right, all human death is touched by Christ’s presence, and if Christ offered himself ‘for all’ and not ‘for many’ (as we will soon have to say in the Eucharistic Prayer, although in this Prayer ‘many’ does not mean ‘many’, but means ‘all’, and people ask rightly why, if we mean ‘all’, we don’t just say ‘all’. Liturgy seems to be exempt from the principle that words should mean what they are generally taken to mean. But let us move back from liturgy into calmer waters) then we are right to think that this is efficacious in ways that go beyond what we can calculate. Only God resolves the enigmas of sin and death and he does this through Christ: redeemed and sanctified life in the Church is a sign of what touches all. If the power of Christ is without limit – and it would be a bold person who tries to place restrictions on it – then all human death is a death in Christ because he has died with all and for all. Cyril of Alexandria in the early Church held that the Incarnation is how God comes to dwell in all human beings:

… the Word has dwelt through one man in all of us, so that this one man having been established as the Son of God…. this dignity might pass into all the human race…. The Word dwells in us all.

What I think a doctrine of Purgatory gives us is an imaginative way of looking from our side at this incorporation of all in Christ; it offers an imaginative, mythical way of thinking of the final stages of being ‘in Christ’. What do I mean? Reflect that we experience ourselves as complex and divided, unable to focus consistently on God; charity does not flow effortlessly through us and we cannot make it cohere. We’re aware that much of the time we are engaged in a self-directed, subtly self-serving way of life; as Iris Murdoch puts it, we find it hard to be ‘good for nothing’ and to do good unselfconsciously with no regard for ourselves and our achievement. But genuine selfhood - ‘me at my best’ - will be one in which we are caught up in the good, the true, the beautiful without remainder, without any preening that we are doing this, that we are being a ‘better’ person. The business of being a real person is a move from self-absorption to selfless attentiveness to God and others.

This is what Christian life is trying to achieve: a proper and foundational respect for God and a generous self-giving to others. The genuine self is a self-emptied self – and if you suspect a paradox there, you are right, but it is no accident that the Epistle to the Philippians speaks of Christ in precisely these terms when it views him as ‘self-emptying’ or ‘kenotic’. The best of us is reached when the worst of us is stripped away from us and when we are taken into goodness in a chastened, less bullish way.

This is something that happens in varying degrees to most people, possibly to everyone, when the obligations of life and its diminutions impose constraints on us and squeeze us, and if this happens, then what comes from us is a purified, more realistic and humble, genuine selfhood, with a lot of the nonsense drained from us. (Most of what passes for culture and entertainment is simply an indulgence of the nonsense-side of us: you should enjoy it, but you should realise what it is.) It is no accident that when the Catholic imagination tells the story of how we journey finally into the depths of God, it thinks of the final stages of this journey as a purification by which all that is contingent and selfish is drawn from us and what remains of us is the self simply loving God and thereby loving all who are in God. Our imaginative, mythical story of Purgatory is a canonical, endlessly rich way of glimpsing a truth at the heart of how we are purified so that we become persons in God. As Philip Larkin puts it in ‘An Arundel Tomb’: ‘What will survive of us is love’.

John McDade explores further the doctrine of Purgatory in a subsequent article for the Feasts of All Saints and All Souls.

This article is based on a talk given to the Priests of the Diocese of Westminster at Westminster Cathedral on 11 November 2010.

[1]‘The point of destructiveness within creation is not in the fact of death, but in the moral evil associated with human freedom: this is the point where the creation can be mortally self-destructive… There is a ‘death’ associated with sin which is a graver matter than physical dying. (J. McDade, ‘The Death of Christ, his Descent among the Dead and his Resurrection,’ in Commentary on the Catechism of the Catholic Church, ed. M. J. Walsh (Geoffrey Chapman, 1994), 143-61; 150-1)

How hallowed is Halloween?