Skip to main content
Photo by Image Editor at flickr.com 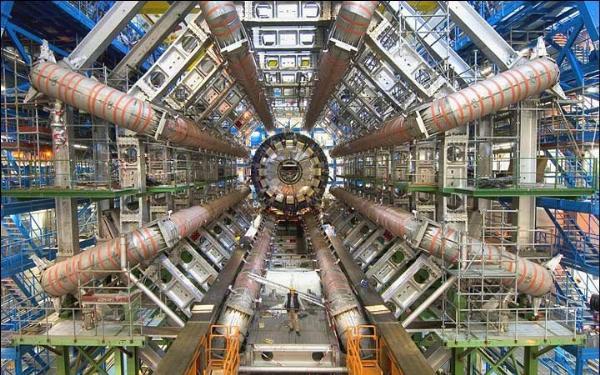 At a conference of the European Physical Society last weekend, there were suggestions that scientists at the Large Hadron Collider are getting closer to finding the elusive particle, the Higgs boson. Its discovery might be able to answer many important questions for scientists, but there are always further questions to ask for believers in God, writes Michael Smith SJ. Will ‘The Grand Theory of Everything’, which rests upon the discovery of the Higgs boson, really tell us the whole story?

The Large Hadron Collider on the border of France and Switzerland and the Tevatron Collider in Illinois in the United States, are racing to be the first to discover a particle called the Higgs boson – or, strictly speaking, to find out whether it exists at all, and if it does, to measure its energy (which is equivalent to its mass). The Higgs boson is a key piece in the jigsaw called the Standard Model, which aims to unite two great theories that between them – but so far, in two quite separate parts – bring together all the physical observations of fundamental reality: the theory of general relativity and quantum theory.

Einstein’s general theory of relativity provides a model which describes with great accuracy the effects of gravity; quantum theory provides a very complete description of interactions which take place on a minutely small scale, but does not at the moment take into consideration the effects of gravity. When a theory is found which brings together these two, it will be christened, ‘The Grand Theory of Everything’. Comprehensive and final as this may sound, that will not be the end of physics – partly because that would be rather a pity (what would all those scientists do now?!) and partly because even in the event of such a discovery, the project of physics would continue in the exploration of the intricacies and implications of the theory. And in any case, the colliders may find other particles which show that our understanding at the moment doesn’t go nearly far enough.

The energies involved in the two colliders are so large that the events that happen in them are unlikely to happen naturally elsewhere on earth, except for an occasional reaction caused by a high energy cosmic ray which hits us from somewhere in space. The real interest in finding out about the Higgs boson is that such knowledge will provide a much clearer picture of the origin of the universe, of that great cosmic banger that set it all off. As we understand it, in the first second or so after the touch-paper of the universe was lit, fundamental particles began to react to produce the building blocks of the universe: particles such as neutrons, protons and others, then hydrogen and some helium, and eventually the atoms and molecules which make up the stars and planets we see around us today.

Science does not search back beyond the instant of the Big Bang – usually, it’s said, because time itself began then and so the concept of ‘before’ has no meaning; or because the completely uniform fireball in those very first instants could not contain any information about any previous structure or origin, had it existed. But for those who believe that God was very much around at that time, there are further questions to be asked, if only because any model of reality which excludes God has to be incomplete.

There are questions that need to be considered when trying to reconcile a purely scientific analysis of the very first instants of reality with the Christian belief in an eternal God. We consider that time only ‘started’ in the instant of the Big Bang, but God is outside of time, and so it would seem to cause a creator God no problem to create time along with the rest of physical reality! But how then are we to speak of God’s action before (only we can’t use really that word here!) time began? And, indeed, how are we to understand God’s continuing sustenance of creation?

It is perhaps no accident that these opening words of John’s Gospel – which express the belief that God, through His Son, is the source of all life – echo those of the Book of Genesis: ‘In the beginning when God created the heavens and the earth’ (Genesis 1:1). The word translated in Genesis as ‘created’, though, implies that God was beginning from a disorderly chaos which needed sorting out, rather than the process being one of creation from nothing – creatio ex nihilo – which is the context in which we tend to discuss creation.

The New Testament speaks of God’s continuing role, through the Son, in sustaining the whole of creation: ‘He [the Son] himself is before all things, and in him all things hold together.’ (Colossians 1:17); or ‘He [the Son] is the reflection of God’s glory and the exact imprint of God’s very being, and he sustains all things by his powerful word.’ (Hebrews 1:3). St Thomas Aquinas agrees that ‘the world exists forasmuch as God wills it to exist, since the being of the world depends on the will of God, as on its cause’. (Summa Theologiae 1:46: art 1).

In addition to these and the many other ways in which faith in God’s creation and care of the world has been expressed, there have also been various models proposed over the centuries about how this care manifests itself. Most Christians are not happy with the ‘clockwork’ model of God’s creation – the idea that God simply chose to create whatever physical phenomena produced the Big Bang, and then sat back and let events evolve: the formation of fundamental particles, atoms of hydrogen and helium, and then the molecules that we know today; the formation of planets from the dust of exploding stars; and eventually the first traces of life, at least on one if not many of these planets. We’d really like God to have taken and to be taking more of an interest than simply fulfilling the role of manufacturer and first spectator of a clockwork process of universe production. But moving from the clockwork model of creation to one where God is caring continually for us is not that easy.

Any physical intervention by God in the operation of the universe would involve the violation of one or more of the conservation laws of physics, which state that a particular measurable property of an isolated physical system does not change as the system evolves; even the transfer of information of any kind into the universe has to simultaneously involve an energy transfer, and – as far as science can see – no such violations ever occur. If they did – if they could – it would remove the basis for the whole of scientific thinking, as its most basic principles would be shattered.

But although we may continue to think about how God’s love for his created order is displayed, taking a purely scientific approach to the problem is not going to give us an answer. The faith as articulated above by Aquinas sees God as the source of and reason for the existence of the universe, but not in such a way that he is a divine scientist, overriding the laws of physics to suit his purposes. Scientific method will not allow us to discover how God interacts with the universe: it seeks a model that will account correctly for all known phenomena, and will predict some new things that we can look for and by their existence confirm the model. Such a model is usually mathematical, and to confirm its success, we want to find two things: firstly, that it shows that such things as the values of various physical constants (for example, the mass and charge of an electron) must be what they are; and secondly, that it shows there must be further things to find out – for example that there must be a ‘God particle’ (the Higgs boson) which, if it’s found, will be a great step ahead for the current model in use, the Standard Model. All such models are based on large collections of scientific data, measured in various ways and collected over many hundreds of years. But they aren’t based on any data which isn’t strictly physical, so they won’t ever cover or predict anything which is not strictly a physical phenomenon – so, no God, no miracles, no being sustaining the universe. The scientific answer to the question of why the universe (or every one of the universes, according to some theories) is the way it is, is because that is the way matter and energy are. Science doesn’t permit us to ask ‘why’ any further.

Nowadays, scientific theories don’t on the whole get disproved. They get qualified and taken up as parts of larger, more comprehensive theories. So Newton’s laws of motion are still here to say what will happen when we drive on the wrong side of a busy road, but are in fact only true when the mass of the body is medium size (not as small as an electron, say, and not as large as a star) and the velocities involved are low (up to a fraction of the speed of light). Outside these limits, theories such as Einstein’s special theory of relativity show that Newton’s laws are an approximation of a larger theory in those limited ranges of mass and speed.

But such developments in scientific theories should not foster a mistrust in science, or encourage us to take a God-of-the-gaps approach, where a perceived gap in current scientific knowledge is presumed to leave room for something that science is unable to account for, and which must therefore be explicable only by recourse to a supernatural source, namely God. Our faith should allow us the confidence in the laws of science (and in the validity of scientific endeavour) to believe that they may be in themselves part of God’s creation, rather than something to explain separately to, or in spite of, God’s care of creation (cf. ‘Evolution and Christian Belief’ by Brian Kilbey, on Thinking Faith).

So what do we believers in both science and in God pray for? Perhaps for the Ultimate Grand Theory of Everything, in which scientific models such as string theory take their place as part of a structure which includes all of reality, including God. Historically, the study of science used to be part of theology in many universities, and perhaps in that structure lies an insight to be valued.

Michael Smith SJ is a Jesuit priest who has spent most of his life in education. He read physics at Oxford and theology at Heythrop College in London, and this combination sparked off a life-long interest in how science and theology fit together.

Read more about Science and Theology on Thinking Faith:

‘Science and Theology: An Introduction’ by Rev Dr Michael Fuller

Jesuits and the ‘God Particle’