Skip to main content
Photo by BayerNYC at flickr.com 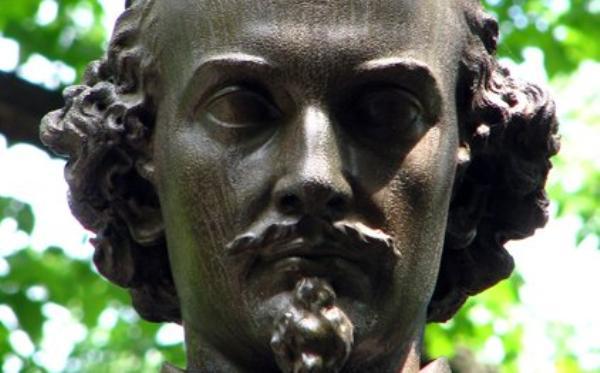 Was William Shakespeare a Catholic? The Archbishop of Canterbury suggested recently that the playwright ‘probably had a Catholic background’, but how are we to interpret this? Jesuit historian, Thomas McCoog looks at the literary and historical quest to determine Shakespeare’s religious identity – including a claim that he visited the Venerable English College in Rome – and asks how much would be gained by settling the matter conclusively.

I am a bit confused. In a recent interview at the Hay Festival with the actor Simon Russell Beale, Dr. Rowan Williams, Archbishop of Canterbury, commented on William Shakespeare’s religious views. We know very little about the Bard’s life and that there was no definitive proof of his religious affiliation, the archbishop admitted. But, according to the report in The Telegraph on 29 May, the archbishop opined that the playwright was probably a Catholic. Yet, ‘I don’t think it tells us a great deal, to settle whether he was a Catholic or a Protestant, but for what it’s worth I think he probably had a Catholic background and a lot of Catholic friends and associates. How much he believed in it, or what he did about it, I don’t quite know’. As regards his friends and associates, religious convictions are not necessarily contagious. What one’s best friends do, say or believe, reveal little but tolerance. But if there is no direct evidence, if there is no clear proof, why did he conclude that Shakespeare was probably a Catholic? More important, if it really does not tell us a great deal, if it does not really matter, why then should we care?

Not surprisingly the archbishop’s statements generated various comments on the newspaper’s website, not all of which were silly and fatuous. Some, like a certain school of contemporary criticism, dismissed the whole question of Shakespeare’s religious convictions as irrelevant in itself and extrinsic to a proper understanding of his oeuvre: in all senses art transcends temporal and spatial categories. Others rightly contend that literary works are artistic creations of specific individuals in a specific context. Greater knowledge of the author and greater familiarity with the context enhance appreciation of the product. In a letter to the editor of The New York Times on 6 May 2011, Andrea Campana laments:

…attempts to retrofit Shakespeare into the cultural or political milieu of the moment are misguided and, in this case, downright silly . . . . In particular, the strawberry-spotted handkerchief of Othello has less to do with O. J. Simpson than with the attempts of Catholic spectators to collect a holy relic by dabbing their handkerchiefs in the blood of a freshly executed priest or other Catholic martyr under Queen Elizabeth I.

There are enough hints scattered throughout the playwright’s corpus to suggest a sensitivity to specifically Catholic practices and doctrines. Through a careful, albeit subjective, decoding of his plays, some scholars assert that Shakespeare was a clandestine Catholic if not an outright recusant (e.g. Clare Asquith, Shadowplay: The Hidden Beliefs and Coded Politics of William Shakespeare [London, 2005]). Peter Milward SJ explicates the variety and frequency of Shakespeare’s religious sentiments in his many publications, e.g. The Catholicism of Shakespeare’s Plays (Southampton, 1997). But does the use of Catholic themes and conventions convert into an adherence to Catholicism? Is the mournful ‘Bare ruined choirs, where late the sweet birds sang. // In me thou see’st the twilight of such day // As after sunset fadeth in the west’ simply a nostalgic reflection of happier times as twilight approaches? Or an earnest longing for the old religion since destroyed by the reformers? Can we find any evidence of Shakespeare’s religious affiliation beyond the winks and the nods of his plays to help answer this question?

A late seventeenth-century Anglican clergyman, R. Davies declared that ‘he [Shakespeare] dyed a Papist.’ Suspicions that Shakespeare was a Catholic have circulated for more than a century. The English Jesuit, Christopher Devlin argued that the ‘Master W.S.’ to whom the Elizabethan Jesuit poet, Robert Southwell addressed an introductory epistle in later printed editions of his poems, editions which have no real textual authority, was in fact Shakespeare (The Life of Robert Southwell: Poet and Martyr [London, 1956], p. 263). Others cite the alleged spiritual testament of the playwright’s father, John, a testament discovered during renovations on the family home in Stratford-upon-Avon in 1767 but subsequently lost. Purportedly derived from a will of Charles, Cardinal Borromeo, the testament has been dismissed as a pious fabrication (see Robert Bearman, ‘John Shakespeare’s “Spiritual Testament”: A Reappraisal’, Shakespeare Survey 56 [2003], pp. 184-204). The so-called Borromeo testament first appeared in print in 1635 (thus post John and William Shakespeare) and was first attributed to the Milanese cardinal in the eighteenth century. But even if the testament were authentic, it says nothing about the convictions of John’s son.

The quest for such proof has progressed from a demi-confessional cottage industry to a non-sectarian semi-circus. Recent preparations for an exhibition involved the Venerable English College, Rome, in the search for evidence of Shakespeare’s religious beliefs. This college, it should be noted, was under the administration of the Society of Jesus from 1579 until the suppression of the Jesuits in 1773.

Shortly before Christmas 2009, the college’s vice-rector announced that previously unknown evidence had been found that William Shakespeare had visited the college in 1585, 1587 and 1589. Of course, Shakespeare had not used his own name but had employed aliases. This new information, according to the same source, filled in some missing gaps in the playwright’s life. But this news was not as new as the vice-rector thought. Others had beaten him to it. Professor Hildegard Hammerschmidt-Hummel made the same claim in William Shakespeare-Seine Zeit-Sein Leben-Sein Werk (Mainz, 2003) (English translation: The Life and Times of William Shakespeare, 1564-1616 [London, 2007]). And even she may not have been the first.

But what are these entries in the pilgrims’ book that are advanced as evidence? Professor Hammerschmidt-Hummel and the vice-rector cite Arthurus Stratfordus Wigomniensis [sic] in 1585; Shfordus Cestriensis in 1587 and Gulielmus Clerkue Stratfordiensis in 1589. The vice-rector translates them as ‘[King] Arthur’s [compatriot] from Stratford [in the diocese of] Worcester’; ‘Sh[akespeare from Strat]ford [in the diocese] of Chester’; and ‘William the Clerk from Stratford’. As the news travelled throughout the Catholic press, some journalists even wondered whether Shakespeare had in fact studied for the Catholic priesthood despite these alleged Roman visits occurring after his marriage to Anne Hathaway. The geographical shift of Stratford from the diocese of Worcester to that of Chester, and the confusion of Staffordiensis with Stratfordiensis are but two of the problems with these entries.

Between the first entry on 29 December 1580 and the last in 1656, the register of pilgrims provides fascinating information on English abroad. The English Jesuit, Henry Foley published the register in the sixth volume of his monumental Records of the English Province of the Society of Jesus, 7 vols. in 8 parts (London, 1877-1884). Brother Foley transcribed the above entries and translated them into English. Far from being Arthur’s compatriot, the first is simply Arthur Stratford from Worcester who arrived at the college on 16 April 1585 from the English College, Douai, where he had been a student since July 1583. On 25 April he entered the college as a seminarian and was ordained priest the following year. He was sent to England and vanishes from the records in September 1588 (Foley, Records, VI, 557; Godfrey Anstruther OP, The Seminary Priests, Vol. 1 Elizabethan [Ware/Durham, 1968], p. 340 [Anstruther claims Stratford was from Gloucester]; and Thomas Francis Knox, ed., The First and Second Diaries of the English College, Douay [London, 1878], pp. 196, 204).

Brother Foley was not sure whether the second was Sliford or Stiford of Cheshire. This man, whose first name may have been Dominic (or that may be an abbreviation for Dominus), remained in Rome at the college’s expense between 28 February and 8 April 1587 (Foley, Records, VI, 559). Nothing more is known about him.

The third is not a Stratford clerk but a William Clark(e) from Stafford (Foley, Records, VI, 561). He entered the college as a student on 22 September 1589 and was ordained priest in 1592. He was executed in Winchester on 29 November 1603 for involvement in the alleged Bye Plot against the recently crowned King James I of England.

With the exception of the mysterious Sliford or Stiford from Cheshire, we can provide non-Shakespearean identities to Arthur Stafford and William Clark. Does this mean that the playwright was not a Roman Catholic or had never visited Rome? No, it simply means that this evidence too collapses under the weight of historical investigation.

Recent historiography has revealed the nuances and shadings of the Elizabethan religious and spiritual landscape. The Elizabethan Church did not change overnight; the altars were slowly stripped. During the 1560s – Shakespeare was born in 1564 – there was considerable religious confusion as Protestants defined their reformation and Catholics debated their reply. The same priests celebrated Catholic Masses and conducted Protestant services. Except in their dealings with the government, they considered themselves Catholics. So too did the lay men and women who physically attended authorised services out of loyalty to their monarch, but did not participate in the prayers. Today we are more accustomed to a variety of Catholics: cradle, cafeteria, lapsed, charismatic, Tridentine, Vatican II, and so on. Over the past decade we have become more aware of the hitherto marginalised ‘Church Papists’, Catholics who for various reasons conformed periodically to the Established Church and thus (post hoc and propter hoc) avoided financial ruin and imprisonment. They were not recusants who, by definition, refused to attend such services at tremendous risk. Later historians identified the recusants as true Catholics, and castigated Church Papists as schismatics. A spectrum ran through Elizabethan Catholicism, and many vacillated. Shakespeare himself may have been one.

Oscar Wilde once quipped, ‘The only thing worse than being talked about, is not being talked about’. William Shakespeare has never been ignored. He may be reduced to a nom de plume for Christopher Marlowe, the Earl of Oxford (the thesis that forms the basis for the forthcoming film, Anonymous, directed by Roland Emmerich), the Earl of Southampton, or even the English Jesuit, Edmund Campion (see http://www.shakespeareunmasked.com/), but he is not ignored. The current search for the smoking gun to prove Shakespeare’s Catholicism to an incredulous academia (and especially to yours truly, described by one outspoken proponent as a ‘positivist’ historian) has attracted its share of the lunatic fringe who, with little evidence, have spun out fantastical theories about him, his missing years, and his relations with English Jesuits. Not only nature abhors a vacuum. Despite the proliferation of superficial, unsubstantiated answers, the question remains important. Contrary to the archbishop’s statement, I think the answer will tell us a great deal about the religious sentiments of one exceptionally talented person, the man of the millennium, about the nature of the Elizabethan religious settlement, and about the identity of English Catholicism itself.

Thomas McCoog SJ is the Archivist for the British Province of the Society of Jesus.

Richard III: ‘every tale condemns me for a villain’