Skip to main content
Photo by conservativeparty at flickr.com 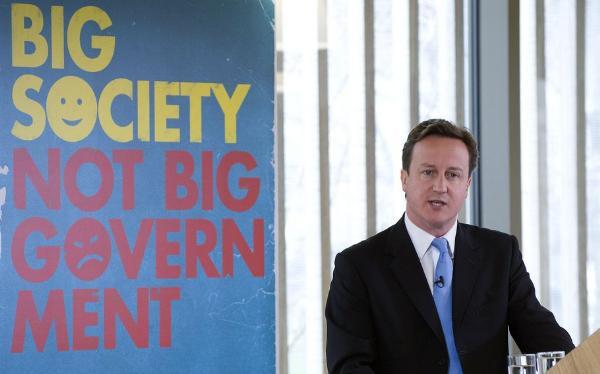 David Cameron’s ‘Big Society’ agenda is still being questioned and causing confusion nearly a year after the 2010 General Election. Is it just a fig leaf for the spending cuts which have generated anger and frustration nationwide, or is there a more comprehensive political vision behind the idea? Angela Kitching asks whether the Big Society has a future, and looks at what it represents to both parties in the coalition government.

With political analysts predicting the ‘end of the Big Society’, reports that the architect of the vision is reducing his voluntary hours at the Cabinet Office, and national outrage at the spending cuts, some people might be questioning whether the government’s Big Society is going to last through 2011. But some factors fundamental to answering the question, ‘What is the Big Society?’ give me confidence that it could have a future.

‘Big Society’ has been used as a term to describe a range of ideas central to David Cameron’s political vision. The amorphous terminology of the Big Society and the frequency with which this is used means that many people seem unsure as to what the Big Society is. Before the 2010 General Election, the Big Society was a political vision encompassing reduced state involvement in service delivery to the public and a corresponding increase in voluntary participation in providing these services. The idea was that when a person presented a problem, it was to their own community they should look for a solution. The increased involvement of small charities, church groups and local activists in supporting their own community was the aim of the Big Society.

The reduction in state involvement in service delivery was aimed at giving such groups and active individuals the opportunity to flourish. The Big Society is not meant to embody purely a Thatcherite belief in small government; it is rather the belief that government, both local and national should be present to enable people to solve their own problems, to act as the guarantor rather than to be the service provider of first resort.

The person charged with leading the delivery of Big Society politics on the ground, Lord Nat Wei described the Big Society as being like a marine eco-system. The sea-bed is the foundation provided by central government, local government and regulatory bodies. It provides services to the most vulnerable and guarantees that no-one sinks beneath a certain level. The coral of local charities and businesses build on the sea-bed providing a range of innovative services to a wider range of individuals. The fish are individuals or neighbourhood groups, their services are hard to track and changeable but they provide the life at the heart of the eco-system. Without the sea-bed, the coral or the fish, the Big Society would not exist. Lord Wei believes it is up to government to provide the right environment and then, the Big Society will flourish.

However, since the 2010 election, there has been a new impetus and focus to the idea of the Big Society. The outcome of the election, in which no party gained enough seats to form a majority government, led to the Conservatives and the Liberal Democrats both taking on the ideology of the Big Society , and I believe it is fundamental to their joint project. The Liberal Democrats bring with them a solid commitment to ‘localism’ – a policy which has been likened to the subsidiarity of Catholic Social Teaching – the idea that decision making should take place as close to the subject of that decision as possible. Combined with the idea that services could be largely be taken over by local groups, the Big Society has gained muscle through legislation such as the Localism Bill, which gives neighbourhood groups much greater, legally binding decision-making powers over planning and service delivery in their community. As the Government pursues more legislation devolving decision making powers beyond local government to neighbourhood groups, local variation (or, more negatively, the ‘postcode lottery’) will become a feature of many services people currently rely on.

The Big Society has come to represent both the voluntarism of David Cameron’s Conservatives and the localism of Nick Clegg’s Liberal Democrats. In many ways its longevity as an idea is guaranteed as long as the coalition government partners both view it as originating from their own political tradition. The test of the Big Society will come when negative news stories emerge as a result of the ultra-local variation in service delivery it will lead to. For example, how will politicians respond to the idea of the Big Society when middle-sized charities collapse as service contracts are withdrawn in favour of higher variation in local providers? Or, when the dreaded ‘postcode lottery’ emerges in a sensitive media story such as the withdrawal of existing state run services from children or people with disabilities? Will the national politicians be able to hold back from stepping in to save the day? Certainly, in the legislation that underpins changes to local government and the National Health Service, Westminster politicians have reserved some very significant powers to themselves, and perhaps this role as underwriters of the Big Society is the right place for them to be. But the removal of the safety net provided by regulatory bodies and regional or local decision makers means that national politicians will be left carrying the can if neighbourhood groups or businesses do not step up to fill the space created when existing governance structures are removed.

Some people would argue that in a climate of cuts, the Big Society is merely a fig leaf for the removal of adequate funding from services and a reduction in national and local government staff. But, I believe this underestimates the political vision behind the idea. A stronger civil society with greater involvement in volunteering and a proliferation of neighbourhood groups may emerge as a result of Big Society initiatives. The changes created by a combination of cuts and an ideological commitment to less government involvement will certainly change the shape of our society. But cuts alone will not realise the Big Society vision. Indeed, the cuts threaten the Big Society because if national or local government fail as underwriters, or the coral of private and charitable involvement collapses due to inadequate investment, then it is very unlikely that citizen groups will have the confidence or capability to take on ever greater service provision for local communities.

The Big Society was David Cameron’s vision for increasing individual involvement in the community and reducing the role of the state. But, in the political marriage of convenience created at the last election, the Big Society has taken on many Liberal features. Its role as the creative glue that holds both political parties and their approach to government together may be the key to its longevity.

Angela Kitching works for the charity, Age UK but is writing in a personal capacity. She is a member of the Thinking Faith editorial board.