Skip to main content
Photo by Heinrock at flickr.com 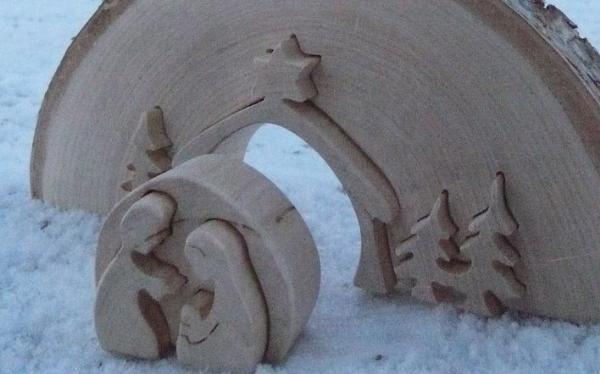 The familiar imagery of Christmas helps us to capture, as best we can, our understanding of God becoming man – but how can we grasp the wonder of the birth of Jesus through what can often seem like a trivial celebration? Philosopher, Gerard J. Hughes SJ invites us to find, in the pictures on our Christmas cards and the presentation of our cribs, something of both the simplicity and the mystery of the Incarnation, for which our words are inadequate.

It’s very easy to trivialise Christmas. I don’t mean just the commercialisation of it, nor am I criticising the giving of presents and the enjoyment of parties, still less the simple beauty of many a Christmas Mass. No, I mean that it is especially easy to underestimate the true religious depth of Christmas both because of, and despite, the familiar imagery in which it is normally presented.

Still, the imagery is important – for the early Christian readers of the Gospels of Matthew and Luke, and for ourselves as we design our cribs and cards. That Jesus, born in a stable when there was no room at the inn, is presented as sharing the lot of the poor and outcast alerts the reader to an important theme of his later preaching; and in the same vein, it is poor Jewish shepherds who go to see the wonder which is promised. Yet, from the other end of the world, and at the other end of the social and intellectual spectrum, so to speak, gentile sages are led by the presence of God, symbolised by the star, to come and worship him; in this way Matthew alerts the Jewish readers for whom he was writing not to be unduly shocked by the rejection of Jesus by Herod, and the terrible end he was to meet at the hands of his own people. His readers were to grasp the amazing truth that Jesus was a revelation for everyone on earth who is willing to be led by the wisdom of God. Luke’s infancy narratives emphasise at every step the importance of the Spirit of God, who overshadows Mary at the conception of Jesus, and inspires the Baptist to recognise him when Mary visits Elizabeth. In similar symbolic vein, many a modern crib contains the figures of the many peoples, black, white, brown, and yellow for whom Jesus comes; sometimes the presence of a model train, or of factory chimneys serves to remind us that the mystery of Christmas is not something which was over and done with more than 2,000 years ago. The imagery, in one way so simple, direct, and appealing, calls the reader to see beyond the humble birth of a Jewish boy who, as the readers of the gospels would know only too well, was destined to be a sign of contradiction and to die a shameful death.

But for us, the vividness of the imagery, its very familiarity and Christmassy presentation, concentrating on the beauty of the mystery of the incarnation, can risk blinding us to the immense act of faith to which Matthew and Luke were inviting their readers. It is important to recall that the first disciples, who had been overwhelmed by Jesus’s preaching and who expected the imminent establishment of the Kingdom of God, were utterly disillusioned by the crucifixion of the man who was seen as more than a prophet. It took the experience of the risen Jesus to convince them how inadequate that description was. In the same way we can radically misread, underestimate, trivialise Christmas if we think of Jesus just as ‘no ordinary baby’.

First, Jesus was a perfectly ordinary baby – an ordinary Jewish baby, who grew up to be an ordinary Jewish man, a prophet who faced his death and apparent failure with courage and fidelity. This is precisely one aspect of the truth which the Council of Chalcedon was to emphasize in 451 – four centuries after Jesus died. Jesus Christ was a perfectly ordinary man. Pope John Paul II, speaking to a group of pilgrims in Rome, quoted the text of Vatican II’s The Church in the Modern World: ‘He worked with human hands, he thought with a human mind, acted by human choice and loved with a human heart. Born of the Virgin Mary, he has truly been made one of us, like us in all things except sin.’ Christian faith does not ask us to believe in a kind of superman taking on the appearance of an ordinary human from babyhood to death. That is to say both too much and too little about Jesus. We are asked to believe that just as Jesus was a truly ordinary little baby, so he is also God. We need to say nothing less than that an ordinary baby is God; and we need to accept that to say that is to go beyond the limits of human understanding.

Christmas – celebrating the birth of Jesus – is the perfect time to remind ourselves that we do have words for talking about things which simply surpass our understanding. Yet even when we talk about our own universe, with its mysterious origins, its ‘big bang’, its ‘dark matter’, its tiny objects – strings, for want of a better word – vibrating in ten dimensions, we say what we can while at the same time recognising that our models and imagery are inadequate to capture that distant reality. Even comparatively ordinary concepts like ‘matter’ or ‘consciousness’ defy our precise understanding. So it’s no wonder St Paul said that in this life we can see God only as if in a kind of dark mirror. To say that Jesus Christ is both God and man is the best we can do: but it will mislead us if we think that we can simply add his being God to his being a man, as if these were two realities on the same plane, one of them rather greater than the other. We need to recall that being God is not just an extra set of characteristics that Jesus has – some additional bits, as it were, to make him a special kind of man; his being God is an infinitely mysterious reality, an utterly other dimension, for which we do have words, but of which we have almost no grasp at all. Almost no grasp. We might think of the deepest experiences of the great mystics – people like Theresa of Avila, or John of the Cross, or Ignatius Loyola, who in many words (as Theresa and John did) or in very few (as Ignatius), tried to point us in the direction of an experience which, as they themselves would insist, is ultimately beyond any words. That experience of the mystics is the experience of the truth that the Spirit of God lives in us and transforms us – and, as St Paul says, prays in us when we have totally run out of words to say what we long to say. The infant Jesus, ordinary baby that he was, as yet knew nothing of this; yet in his adult life he spent hours on the mountains in prayer, a prayer of which no word at all has come down to us. That might give us some inkling of what it might have been like for an ordinary human being to be, at a totally different level, truly God, one with the Father in the Spirit.

So we should not trivialise Christmas. Our cribs and cards rightly picture an ordinary baby, surrounded by symbols pointing to a mystery, to express which any word or symbol is utterly inadequate. Perhaps sometimes, deep in our ordinary selves, we too can remember having had experiences of the ultimate mystery of our world and ourselves, experiences for which we have no words: a longing deep in us for something at once as simple as a baby, and as utterly mysterious as the infinity of God. We need to latch on to those depths of our experience as we look at a simple crib, and allow the Spirit to unite us with our hidden God.

Gerard J. Hughes SJ was head of the philosophy department at Heythrop College, University of London, and is currently tutor in philosophy at Campion Hall, Oxford. He is the author of Aristotle on Ethics, Is God to Blame? and the recent Fidelity without Fundamentalism (DLT, 2010).

Is God to Blame?

All I want for Christmas…

The age of innocents