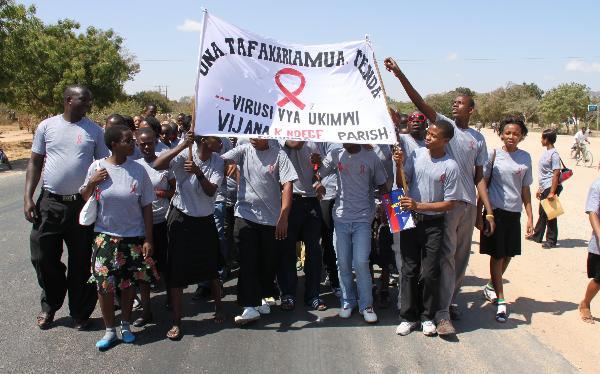 One of the many ways in which the Catholic Church contributes to the struggle against HIV and AIDS in Africa is through education. With the support of the African Jesuit AIDS Network, a recent campaign in a Jesuit parish in Tanzania aimed to inform the values and behaviour of young people in their approach to HIV and AIDS. On World AIDS Day, Ekeno Augostine SJ and Martin Waweru SJ, who facilitated the campaign, describe its success.

Once told and heard, once seen and experienced, once shared and lived a story is never the same. An event held this year in Dodoma, Tanzania, aimed to share the stories of those living with HIV and AIDS with the young people of the area. Many young people in Dodoma are directly or indirectly affected by the HIV/AIDS pandemic through the loss of one or both parents, brothers, sisters, relatives or friends. Though the enormity of the problem therefore confronts us directly, we are still somehow blindfolded and therefore we do not take the right measures to address it. There is an urgent need to raise awareness of the pandemic and in particular to enlighten young people, and also children and adults, about the importance of changing risk-taking behaviour. In this three-day campaign, we aimed to bear witness to the stories of those with HIV and AIDS, to walk in solidarity with them, and to give our young people the tools to combat the spread of this illness.

With great enthusiasm, young men and women from K/Ndege Jesuit Parish, invigorated by their walezi (‘formators’) – scholastics Martin Waweru SJ and Peter Gumisiriza SJ – issued an invitation to the 5 other parishes that make up the Dodoma Deanery, and to representatives from the other 33 parishes of Dodoma Diocese. The invitation was to bring together as many young people as possible to raise maximum awareness of the social repercussions of HIV and AIDS, such as stigmatisation and discrimination, and also to encourage a commitment in behavioural change. As well as talking about the facts of HIV and AIDS, the young people would arrange a march into the town and the environs of K/Ndege parish, and they would have an opportunity to listen to the experiences of people living with HIV.

The three-day conference was hugely successful from the start. We were able to raise funds through the support of the African Jesuit Aids Network (AJAN) and, thanks to the large numbers who participated, the campaign reached far and wide – not only the young people of the deanery, but also the older members and the young people of Dodoma itself.

For the first two days, the young people took part in discussions about HIV and AIDS, looking at the pandemic, its causes and effects, from a number of different angles: Fr Eric of the OFM Capuchins presented on the Eucharist, the Cross as a symbol of faith and the meaning of Good Friday; the second facilitator from Kibaigwa talked about the role of family and the need for youth action; and Martin Waweru SJ spoke on values and principles centred on Christ, and on the understanding of the AIDS virus, CD4 count, spread of HIV, symptoms of AIDS, and mitigation of HIV and AIDS.

Our hope, in offering the young people discussions on these topics, was that they would recognise their own role in the fight against HIV and AIDS: rather than simply listening to their leaders speak about the HIV crisis, they need to realise how HIV and AIDS is a problem of individual behaviour. Although our young people have a basic awareness of HIV and AIDS, they needed to demonstrate what they knew by ‘walking the talk’. Young people have great influence on one another – they become peer educators and can foster risk-avoiding behaviour by being role models, as well as by exchanging and sharing acquired life skills – and so we hoped to give them the tools to make changes in their own lives in order to do this.

Making Christ’s values and principles the centre of our lives

The first presentation was on values and principles. This topic was discussed with an understanding of value as ‘a belief, mission, or philosophy that is meaningful to us and is usually shown in our behaviour’. Each person has core values that are not changed easily and are lived out in that person’s behaviour. At the same time, it is true that these values may differ between people and groups: for instance, the values of street gangs may be harmful to others when they are acted upon, but within the gang, they are deemed appropriate and they define the roles and behaviours of that group.

The presentation asked the young people to identify those values that would lead them to make right decisions and to think about how those values guide their thought processes and lead to right behaviour. They were asked to consider what would be irresponsible behaviour and what would be responsible behaviour in the face of HIV/AIDS, and to think about whether pleasure equalled happiness. The next step was to reflect on how their values could motivate them and enable them to prioritise and progress, rather than put them at risk. Through this reflection, we discussed the possibility of value-based interventions in behaviour, changes in our actions which would entail risk avoidance rather than just risk reduction. The latter approach usually assumes that behaviour is difficult or impossible to change, and so there was a need to stress the fact that young people can change their behaviour by focusing on Christ, and the choices he calls us to make in the Beatitudes – these should be at the centre of our lives. This idea was developed in a later talk with a discussion of how the Cross, as a symbol of faith and an instrument of salvation, could be a constant reminder of Christian virtues and therefore a source of strength for young people when their values were being tested. The emphasis throughout was on having a firm commitment to the values which Christ taught and by which he lived – a commitment which would manifest itself in our actions. Through a value-based approach, behaviour can change and therefore risk avoidance is a more realistic goal.

The role of the family in HIV/AIDS prevention

Research has shown that over recent years the spread of HIV and AIDS has shifted towards to the institution of marriage, the most affected persons being women of age 15-49, and so it was important for us to address the role of the family in the prevention of the spread of HIV. Although factors such as poverty, transactional sex, non-disclosure among partners, stigma, wars and disparity account for current trends in the spread of HIV, family life, as the core unit of the formation of right values and principles, can play a significant role in HIV prevention. Families should identify, share and uphold their values – this is vital for sustaining value-based HIV prevention.

With increasing numbers of broken families, it is becoming ever more crucial to promote values like care, love and solidarity in the home; young people need to live these values within their families in order to live them outside of their families. There is also a need to ensure that cultural practices that escalate the spread of HIV, such as wife inheritance and non-medical circumcisions, should be discouraged, but at the family level it is possible to establish sustainable tools in the fight against HIV and AIDS such as: involving young people and parents in open dialogues about issues of HIV and AIDS; helping people to identify and live by values that will aid in HIV prevention; upholding effective communication in families about HIV status in the family.

After two days of discussion and reflection, the participants could now spread the message and continue to tell the story of the reality of HIV and AIDS, with more vigour, energy, and information. So, on the third day, we held the march in town.

The march began on Sunday morning at the Cathedral with banners and placards carrying messages such as: Kijana Jitambue, Kijana Jikinge, Kijana Jiheshimu, Kijana Pambana na Ukimwi (Swahili words meaning: ‘The youth should: know their HIV status; protect themselves; respect themselves; and fight against HIV/AIDS’), Upendo na Uaminifu Katika Familia Dhidi ya Ukimwi (‘love, faithfulness among married people is a significant tool to fight HIV/AIDS’), and Ona, Tafakari, Amua, Tenda (‘Reflect, Decide, Take Action’). The three-hour march processed into the town and back to K/Ndege Jesuit Youth Centre. The long and noisy queue of t-shirt-uniformed youth bombarded the senses of those who did not want to see or hear us, but also attracted huge crowds who chanted and shouted along with us as we marched with our placards and banners. The crowd halted the normal proceedings of the small but busy town with the help of traffic police and our well-organised security committee. The event went without a hitch!

The campaign concluded with an opportunity for women living with HIV and AIDS to share their stories. It was inspiring to listen to them and to see their assuredness and ease when talking about their HIV status, knowing that these women would not allow themselves to be discriminated against by society. They were active in telling their own stories, rather than accepting the way in which they might have been treated. It was a real example to the young people of the need to eliminate the stigma associated with this pandemic.

This last session was an opportunity for the young people to see the importance and the relevance of all that they had learned, discussed and done over the previous days: their awareness had been raised and their understanding deepened, and we hope that the way in which they now let their values guide their behaviour will be a testament to the success of the campaign.

The Pope and AIDS in Africa: A human and spiritual wake-up call