Skip to main content
Photo by daveblume at flickr.com 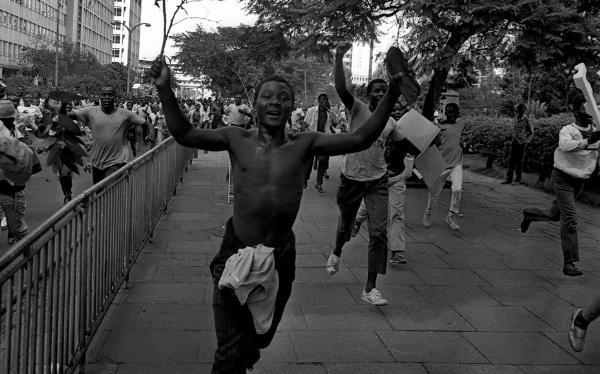 Memories of the seminal events that took place in South Africa twenty years ago this week, which ended with Nelson Mandela’s release from prison on 11 February 1990, will live long in the minds of those who experienced the atmosphere in the country at the time.  Anthony Egan SJ describes the reaction to this crucial chapter in the struggle against apartheid. How did people of faith see these events as a sign of the coming of God’s kingdom?

Do you remember 2-11 February 1990, that ‘long week’ that shook the world, beginning with the unbanning of the African National Congress and other political movements and culminating with Nelson Mandela’s release from Pollsmoor Prison?

I remember a discussion with colleagues in the Religious Studies Department at the University of Cape Town the week before 2 February.  Some of us intended to be at a demonstration planned outside Parliament for that day. Suddenly, quietly, one of the professors said, ‘I have a feeling [then President F W] De Klerk is going to surprise us. I think he’ll unban the ANC and release Mandela next week.’

I doubt our friend had ‘insider information’ – as an activist theologian he was certainly not a confidante of the then National Party regime.  No one really expected what happened. On 2 February I was in Cape Town, about to join the demonstration, when suddenly the news came through, and what could have been a pretty nasty confrontation turned into a celebration.  We were not the only ones surprised: the ANC was caught on the wrong foot and had to scramble to improvise an adequate response to De Klerk.

Another friend of mine, in high school at the time with a granddaughter of Walter and Albertina Sisulu in her class, recalls how, when the news was announced over the intercom on 2 February, her classmate burst into tears of joy. Her parents in exile, who were also involved in the struggle against apartheid, would soon be returning home.

Many people of faith committed to the anti-apartheid struggle read the events of February as a sign of God working in our history. While I still share this interpretation some took it too far, believing that the Reign of God in all its glory was about to come in South Africa. Certainly, Mandela’s release was read by some as a Moses striding forth to lead the enslaved Israelites from Egypt to the Promised Land.

In their joy these believers forgot the rest of the story – a tale of hardship, struggle, conflict and internal division and forty lost years in the desert. How the initial euphoria changed so soon! The long, slow grind of negotiating a transition to democracy was combined with a brutal war over territory between rival political organisations at grassroots level. The supreme irony of our history is that 1990-1994 saw more political violence and killing than the whole 1980s.

We who believe in a God working in and through history, in and through events and persons both religious and secular, need to remember this when we wax eloquently and reminisce about those glorious February Days in South Africa. We need to remember not to reduce history or the Reign of God to single events – ours is not a ‘Single Issue God’.  We need to remember that the resolution of our particular problems, however great they may be, is not ‘the end of history’.  The coming of freedom from tyranny, in lands far from and very near to us, is part of the ongoing, even if only partial, work of God in history.

And yet, and yet... Despite the tough years that led to democracy in 1994, despite the difficulties and frustrations many of us feel even now with a state that does not always live up to the visions we impose on it, I still cannot but look back to those days in February 1990 and feel a little frisson of freedom and a gentle whisper pointing me to what the Reign of God in its fullness may be like.

Anthony Egan SJ is a member of the Jesuit Institute, South Africa in Johannesburg. He teaches part time at St Augustine College of South Africa (Johannesburg) and St John Vianney Seminary in Pretoria.

This article was originally published on the website of the Jesuit Institute, South Africa.

Read Thinking Faith’s review of the film Invictus, which looks at the beginning of Nelson Mandela’s presidency and the events surrounding the 1995 World Cup in South Africa:

The creature and the sovereign self
A wise man
The Two Popes
Spiritual and Religious: The Benefits of Being Both
Words and the Word