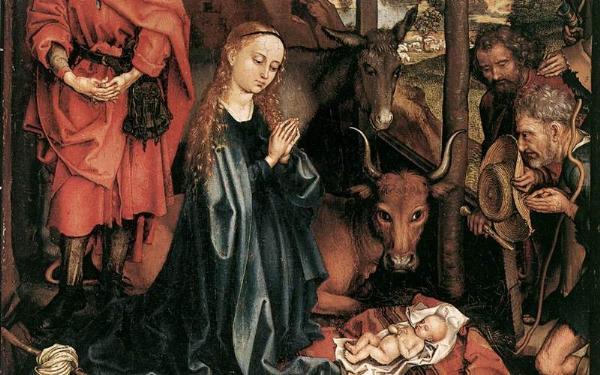 Can we ever really know what happened in Bethlehem at the first Christmas?  Nicholas King SJ suggests that while they may not provide a historical account of the birth of Christ, the gospel narratives still ultimately convey the meaning of the event that we celebrate on 25th December. What are Matthew and Luke telling us about God in the Nativity stories with which we are so familiar?

As Christmas approaches, it is not surprising, and not at all a bad thing, that Christians long to imagine what the first Christmas was like. Indeed, in the Spiritual Exercises, St Ignatius Loyola suggests a very charming contemplation of the Nativity, inviting the retreatant to imagine themselves as ‘a poor and unworthy little servant’, who will see to all the Holy Family’s needs. St Francis of Assisi likewise encouraged the faithful to contemplate the crib at Christmas; and it was he, apparently, who added to the Nativity scene the ‘ox and ass’ that he had discovered in Isaiah 1:3, where the prophet is unfavourably comparing Israel’s relationship to God with that of dumb animals to their owners (the animals recognise that God is Lord, Israel doesn’t). Or if you find yourself visualising camels looking down their supercilious noses at the Christ-child, that is because generations of Christians have meditated on Isaiah 61:6 by way of filling out the details of Matthew’s story of the Magi.

So there is nothing at all wrong with imagining the scene of Jesus’s birth, and paying prayerful attention to what it might have been like. Indeed, I should warmly encourage you to do so, to encounter the mystery towards which our Advent is journeying; and if you find yourself using the Scriptures, both Old and New Testaments, to set the mood, then you will be doing just what Christians, including the evangelists, have done before you at this time of year. But just don’t think that means you know precisely what happened at midnight on December 25th in the year 0.

But what, you clamour restively, can we actually know about the circumstances of Jesus’s birth? Not a great deal, I have to admit. Luke and Matthew are each pursuing their own theological agenda, telling the gospel story to their contemporaries as they know best; and it is almost impossible to reconcile their two narratives.

For Matthew, Jesus is the culmination and high point of God’s dealing with Israel, which starts with the promise to Abraham, reaches an apparent fulfilment in the rule of David and his son Solomon, then plunges into the total disaster of the Exile in Babylon; and finally, Matthew suggests, the relationship between the People of God and the One who brought them out of Egypt reaches the point at which it has been aiming in the birth of Jesus, ‘the one called “Messiah”’. Now Matthew’s readers will not have needed to decode the text, they will instantly have picked it up. We on the other hand cannot read the runes, and foolishly regard the genealogy with which Matthew commences his gospel as ‘the most boring bit of the entire New Testament’. The result is that when this text is appointed to be read on December 17th each year, there are priests who blench in horror and pretend that the day is December 16th or 18th, so as to avoid having to give a homily on the unrelenting list of ‘begats’. But from ‘Abraham begat Isaac’, right down to ‘Jacob begat Joseph, the husband of Mary, from whom was born Jesus, called the Messiah’, Matthew is outlining the unstoppable plan of God. And there is more, for into the list he has introduced four women. They are Tamar, Rahab, Ruth, and Bathsheba. To find out more about them, I suggest that you read their stories in, respectively: Genesis 38:6-30; Joshua 2:1-24 and 6:22-25; the whole of the Book of Ruth (it is only four chapters); and, of course, the robust story of King David’s misbehaviour in 2 Samuel 11-12. What is Matthew saying when he mentions these ladies? All of them had some kind of domestic irregularity: Tamar pretended to be a prostitute; Rahab actually was a member of that ancient profession; Ruth is a very impressive lady, but chapter 4 of the book named after her has some mysterious hanky-panky going on late at night with Boaz which eventually leads to her becoming the great-grandmother of King David; and the wife of Uriah the Hittite behaved in a less than admirable way with David, while her husband was away on campaign (which resulted in Uriah’s murder). So it may be that Matthew is telling us that God can ‘write straight with crooked lines’, as the cliché goes. Or it could be the fact that they, like the Magi, are, or may have been, foreigners: Tamar was a Canaanite, Rahab an inhabitant of Jericho, Ruth a Moabitess, and Bathsheba was married to a Hittite. In that case, Matthew’s interest may have been simply that they were all non-Jews, and at the end of Matthew’s gospel, the eleven disciples are instructed to ‘go and make disciples of all nations’. So Matthew is doing some theology when he writes this genealogy, and our task is to listen out for his message.

That is the case also when the evangelist introduces us to the figure of Joseph, one who dreams, just like that other Joseph, in the book of Genesis, who dreamed and also ended up in Egypt. This Joseph obeys God’s messenger, with the result that Jesus the Messiah is accepted as Joseph’s son (so the genealogy is quite properly his after all); and, because of Joseph’s obedience, Jesus is saved from those in his own nation who sought to kill him.

And then there are Matthew’s Magi. What are they about? They are non-Jews, who get Jesus right from the very beginning, just as the establishment (Herod and his religious experts) gets Jesus wrong from the very beginning, at least in the sense that they regard him as so serious a threat to their status quo that he must be eliminated at all costs. The Magi, by contrast, emerge mysteriously ‘from the East’ to worship ‘the one born King of the Jews’, and load him with gifts of gold and frankincense and myrrh, while Herod’s expressed desire to ‘worship the dear little child’ is really cover for his intention to assassinate it. The upshot of all this is that the child and his obedient father have to flee to, of all places, Egypt – a place that Israel was more accustomed to fleeing from!

But, you ask, did it all happen like this? We cannot know, I am afraid. We can see why Matthew included the story, and what he was saying when he did so. That does not mean that it did not happen; but nor, I am afraid, does it mean that it all took place precisely as described, so that all we have to do is get the right combination of planets or constellations to explain the star, and we can date it all to within a few minutes. It is not like that, nor ought it to be. Our task is to read the story as Matthew intends us to read it, and marvel at this triumph of God’s dealings with his people.

What about Luke? Luke’s tone is quite different from Matthew’s. Luke is a great artist, and it is no accident that his stories and parables have given rise to more paintings than those of any other author in the Old or New Testament. Luke offers, as a colleague of mine is fond of pointing out, a picture-gallery, at which we are invited to gaze, just like Mary, who ‘observed all these things, comparing them in her heart’. That is our task, contemplating prayerfully the pictures of Zechariah and Elizabeth, a charming Old Testament couple; of Simeon and Anna, just another such; or we might find ourselves invited to gaze at that much-loved picture of the least important girl in the most insignificant town in the most out-of-the-way region in the entire Roman Empire – ‘and the virgin’s name was Mary’. Luke shows us all the most important people in the contemporary world: Herod the King (1:5); Caesar Augustus and Quirinius (2:1-2); and, most striking of all, Tiberius Caesar, Pontius Pilate, along with their client-kings the tetrarchs (Herod’s unattractive offspring), and their political allies and subjects, the High Priests Annas and Caiaphas (3:1-2). But none of these great men who so effortlessly wander across the world stage captures Luke’s attention for more than a second. The people whom Luke regards as important, those at whom we are invited to direct our prayerful gaze, are, instead, the poor and marginalised, those who serve the God of Israel: Mr and Mrs Zechariah, Anna and Simeon, John the Baptist, and, above all, of course, the one whom Elizabeth startlingly describes as ‘my Lord’, the first time we meet him (1:43). This one, the subject of the entire gospel, does absolutely nothing in these first two chapters, but lets it all happen to him, because God is in control – and Jesus is God’s son.

And did it, you demand once more to know, all happen as Luke recounts? We cannot tell. Our task is to recognise what Luke is telling us about the God who is at work in the world, about God’s Holy Spirit, and about Jesus, whom God has sent.

What then can we know about that first Christmas? What, if anything, is agreed by Matthew and Luke? They both affirm that Jesus was born in Bethlehem, and that he was in Nazareth: for Matthew, that was because of who was in charge in Judaea when Joseph and Mary and Jesus returned from Egypt; while for Luke, Nazareth was where Joseph and Mary lived. Both of them agree that Mary was a virgin when Jesus was conceived and born, and they seem to have independent traditions about it. They are both of the view that God is utterly in charge, and that, in Jesus, Israel’s history was reaching its climax. They insist that Jesus was born (and we must never forget that it was and remains absolutely essential that Jesus was genuinely a human being). They also both agree, but in quite different ways, that to do full justice to the truth about Jesus it was necessary to use of him language that had hitherto been reserved for God. That is a very daring thing for them both to claim; and we must take it with immense seriousness.

Is that enough, do you think, for you to pray your way through the coming festival? I hope that it will be one of immense happiness for all of you who read these words.

Looking for the Star, or Coming to Adore?

Matthew: a saint for today