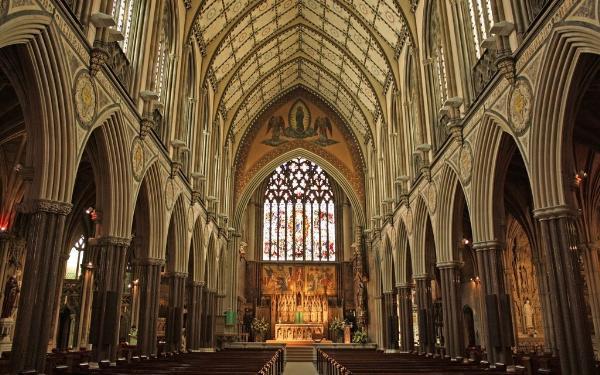 This coming weekend, Farm Street Church in Mayfair celebrates the 160th anniversary of its opening. How did the much-loved church of The Immaculate Conception come to be built after a tumultuous period in the Catholic history of England?

Farm Street, the church of the Jesuit Fathers in the Mayfair district of London, has a special place in the hearts of many people.  It is an improbable name for a church in such a fashionable area as Mayfair.  It harks back to the days when the Jesuits came, in the eighteen-forties, seeking a site for their London church.  They found it in what was in fact the mews (stables and coachman’s quarters) in a back street.  The name derived from the Hay Hill Farm that extended in the 18th century from the present Hill Street eastward across Berkeley Square and beyond.

The Jesuits were no newcomers at that date, of course.  They had been in London from the 16th century. In 1580, in the reign of Queen Elizabeth I, Fr Edmund Campion (now a canonised saint and martyr) and Fr Robert Persons first came to the city.

From then on, a steady stream of Jesuits continued to reach London from the seminaries abroad.  In disguise at first but later more openly, they had gone about their work – offering Mass, preaching and administering the Sacraments.  For a brief period of two years under the Catholic monarch, James II, they even ventured to run a school in the area where the Savoy Hotel now stands and another in the City of London.

The Revolution of 1688 put an end to this toleration, and for the next 140 years Catholics suffered penalties and persecution.  However, by the 1820s it was possible for the Jesuits to run a school for a few years on the Marylebone Road, near the present site of the Royal Academy of Music.

With Catholic emancipation in 1829, the position became easier and by 1850 the Catholic hierarchy had been restored with Nicholas Wiseman as the first Archbishop of Westminster.  In that year the Westminster mission was made over to the Jesuits.  This included the care of St Mary’s Church in Horseferry Road, a highly deprived area, together with Millbank Penitentiary and Tothill Fields prison, workhouse and infirmary, roughly on the site occupied by the present Westminster Cathedral.

In 1843 Pope Gregory XVI was petitioned by a group of prominent English Catholics for permission to erect a Jesuit Church in London and plans were agreed.  What marked the project was the bold and imaginative scale on which it was conceived.  At a time when, with Newman not yet a Catholic, few were capable of discerning the signs of a Second Spring, it showed remarkable vision on the part of the Superior of the English Jesuits, Fr Randal Lythgoe, to have planned a church built to seat approximately 900 people (the actual capacity of the church is 475).

It was a decision calling for great courage.  The cost of the leasehold alone was £5,800 – a very large sum for those days.  But the money was forthcoming through the generosity of private donors, and by 1844 Fr Lythgoe was able to lay the foundation stone.  The church, owing to the shape of the lot, was orientated north-south.  The architect was Joseph John Scoles (the builder was Thomas Jackson and the decorator Henry Taylor Bulmer) and five years later, on the feast of St Ignatius, July 31st 1849, the church was officially opened under the title of The Immaculate Conception. (This was five years before Pope Pius IX defined the dogma.) The style is decorated gothic and the façade of the church in Farm Street is in imitation of the west front of Beauvais Cathedral (remodelled in 1951 by Adrian Gilbert Scott following war damage).  Scoles chose Augustus Welby Northmore Pugin, whose extraordinary work on the interiors of the Houses of Parliament had brought him much acclaim, to design the high altar.  The original building was a simple ‘T’ shape with a single nave supported by stone columns, with sixteen clerestory windows and side chapels to the right and left of the sanctuary.

Here is a first impression written by a reporter for the Morning Post, 1849:

The church is of the decorated English style of architecture and reminds one of some of the earlier English churches… You enter at the very end of the church, and at once appreciate the merit of the design.  The whole building is taken in at a glance; nothing distracts the eye or breaks the effect.  You have the organ loft immediately overhead on entering.  In front blazes the high alter under the great arched window, which is a masterpiece of stained and figured glass… There is no rood-screen.  Nothing separates the eyes of the people from the solemnities of the sanctuary which they desire to behold.  Turning from the ‘dim religious light’ of the church, and the shadowy recesses of the aisles, the eye seeks the roof which is painted in blue and gold, and has the effect as it were of stars.  Tracing one’s way back the glance rests absorbed on the beautiful, flamboyant window above the organ loft.  On the right and left of the high altar, and in either side is a chapel – the one of the Blessed Sacrament, the other of St Ignatius (the founder of the order)… The sanctuary itself is a marvel of decoration, both graphic and coloured.  The altar and attached brass work is by Pugin.

This text, edited by Fr William Pearsall SJ, is taken from The Art and Architecture of Farm Street Church – A Short History and Guide, illustrated with photography by Sue Bingham. The guide is available from the bookshop, sacristy or reception at Farm Street Church, London W1K 3AH.

Setting the world on fire? Anti-Catholicism and the Great Fire of London