Skip to main content
Photo by hickoryhardscrabble at flickr.com 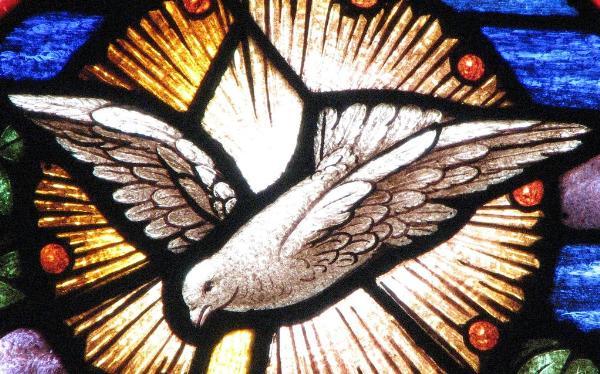 How did the feast of Pentecost develop into the form that our celebration of the coming of  the Holy Spirit now takes? In the first part of an article in which he unfolds our understanding of Pentecost, Nicholas Lash describes how a Jewish harvest feast gradually acquired new significance and changed over time to become Christian Pentecost, which we will celebrate on Sunday 31st May.

When the day of Pentecost had come, they were all gathered together in one place.[1] What happened on the day of Pentecost, or rather, what aspect of the ‘whole mystery of Christ’[2] do we celebrate on the feast of Pentecost? In view of the fact that the event described in the Acts of the Apostles took place on a Jewish feast, it would seem, at first sight, that an investigation into the Jewish feast would be an adequate background for an understanding of the Christian Pentecost. In fact, it is not quite so simple as that. In this article we shall try to do three things: firstly, outline the historical development of the feast; secondly, place the doctrine of the ‘sending of the Spirit’ in the context of the whole paschal mystery, of which it is an essential element; thirdly, draw some conclusions for our own understanding and celebration of Pentecost.

When the chosen people conquered Canaan, they tended to adopt the religious customs of the country and adapt them to their own understanding of theology and of history. Thus the greatest feast of the Jewish year was the result of the fusion of two distinct celebrations: the Passover, ‘the spring-time sacrifice of a young animal in order to secure fecundity and prosperity for the flock’[3] and the feast of Unleavened Bread, the celebration of the beginning of the harvest.[4] The two feasts were finally combined about the time of King Josiah, and marked the beginning of the great annual pilgrimage to Jerusalem.

But the whole life, and therefore the liturgy, of the chosen people was dominated by the memory of one event: the exodus from Egypt. It is therefore hardly surprising that the Passover and the feast of Unleavened Bread, at first separately, and then together, increasingly lost their original significance and became the annual celebration of the exodus, of their liberation from Egypt, and of the covenant that had made them God’s own people.

In addition to the feast of Unleavened Bread, there was another feast which had its origins in the agricultural life of Canaan. This feast marked the end of the harvest, and was the feast of the first fruits. It took its title, the feast of Weeks, from the fact that it was celebrated fifty days (seven times seven plus one) after the feast of Unleavened Bread.[5] However, in contrast to the other Jewish feasts, this feast did not develop into one of the annual celebrations of saving history. ‘It remained a harvest festival which in course of time diminished in significance and in the time of Christ had become merely the joyous concluding day of the Jewish Passover - the time when one went on pilgrimage’.[6] This, then, was the day on which that special outpouring of the Spirit took place which Luke fastens on to develop his theology of the sending of the Spirit from the side of the glorified Christ.

Before passing rapidly on to consider the development of the Christian feast, there is one further fact to be taken into consideration. About the beginning of our era the Jewish Pentecost did acquire significance in terms of salvation history. The sealing of the covenant on Mount Sinai had taken place fifty days after the escape from Egypt: there is evidence that, by the second century A.D., the feast of Weeks had also become a covenant celebration, and the annual commemoration of the giving of the law to Moses. Did this development have any influence on the early Church? One of the greatest of modern biblical scholars is emphatic that it did not:

… there is no connection between the Christian feast of Pentecost and the feast of Weeks as understood by the Qumran community or, in later days, by orthodox Judaism. The story in Acts contains no allusions to the sinaitic covenant nor to the new covenant of which Christ is the mediator.[7]

But this judgement perhaps demands qualification. The theophany recorded in Acts (the ‘mighty wind’, and the ‘tongues as of fire’) not only bears a general resemblance, in terms of imagery, to many Old Testament theophanies, but it seems quite particularly to recall the events at Mount Sinai.[8] Moreover, the ‘little Pentecost’ [9] when the descent of the Spirit was accompanied by the shaking of the ‘place in which they were gathered’, is strongly reminiscent of the quaking of the mountain round which were gathered the old people of God on the occasion of the promulgation of the old covenant.[10]

If we are correct[11] in seeing in this imagery an awareness on Luke’s part of a tradition that was beginning to develop in Judaism, then the interpretation of Pentecost in terms of the giving of the ‘new law’[12] which appears in St Augustine,[13] and continues through to St Thomas[14] is not entirely devoid of biblical foundation.

Be that as it may, the dominant understanding of the feast at the time of our Lord was certainly in terms of its character as the harvest festival of the first-fruits, marking the end of the annual pilgrimage to Jerusalem.

The consciousness of the early Christian community was dominated by the joy and wonder of the present situation in which they found themselves; that of a people ‘no longer strangers and sojourners... (but) a dwelling place of God in the Spirit’.[15] It is true that they had a keen sense of expectancy as they awaited the ‘coming of our Lord Jesus’,[16] it is true that they were aware of the fact that the situation in which they found themselves drew all its power and significance from a past event: the death and resurrection of Christ. But, in contrast to the Jewish people, whose chief preoccupation had been the wonderful works of God in the past, and the distant fulfillment of his promises in the future, the early Church was above all aware of the here-and-now presence of the risen Lord in the Spirit.

They were keenly conscious of the fact that the resurrection of Christ, the Lord of history, marked the beginning of the end of history: that they were living in the ‘last time’. It is this that explains the fact that, when they assembled for worship, they were celebrating their incorporation into the paschal mystery here and now, rather than remembering past events in the history of salvation.[17]

All this is only a question of emphasis, but it had important consequences for the content of their worship. The first Christians knew only a weekly celebration of the paschal mystery: the Lord’s day. In the third century an annual feast did begin to appear, but it was an annual celebration of the whole paschal mystery. As the Jews had known an annual pilgrimage to Jerusalem lasting fifty days, so the annual Great Sunday[18] lasted fifty days, from Easter to Pentecost. As each Sunday was the ‘eighth day’, the celebration of the completion of history, the beginning of the eschatological rest, so the fifty-day feast (seven times seven plus one) was the ‘eighth day’ par excellence. In Christian terminology, therefore, Pentecost came to mean the whole period of paschal festivity and, as such, it was principally a celebration of the resurrection.[19]

But, just as the day of Pentecost was, for late Judaism, a day of special celebration because it marked the end of the annual pilgrimage, so the last day of the Christian Pentecost acquired a particular solemnity. When the Fathers of the Church looked for the special significance of this fiftieth day, they looked, not unnaturally, to its Jewish antecedents: ‘We say that it is the mystery of the resurrection of the Lord which is signified by the feast of the first-fruits’.[20] The Jewish harvest festival, then, is ‘baptised’ in Christian tradition, but as the end of the annual celebration of the resurrection of Christ, ‘the first-fruits of those who have fallen asleep’.[21]

During the fourth century, however, the fortieth day after Easter began to be celebrated in some places as a feast of the glorification (ascension) of Christ. This seems to have been due, in the first place, not to the chronology of Acts, but to the fact that, in the Jewish calendar used in these parts of the Church, this day was the fiftieth day of the Passover celebrations.[22] This is borne out by the fact that, in other parts of the Church, the last day of the Pentecost was now being celebrated as a feast of the Ascension.[23]

Not surprisingly, the coming together of these two traditions influenced the whole attitude towards the annual celebration of the paschal mystery. The unity of this celebration began to be lost, and St Luke’s chronology in Acts governed the gradual appearance of a feast of the Ascension on the fortieth day after Easter, and a feast of the outpouring of the Spirit on the fiftieth day. Within a century the dissolution of the Great Sunday was complete. The fifty days of paschal joy had shrunk to seven (Easter week). The preoccupation with chronology led to the introduction of fasting (hitherto strictly forbidden in paschaltide) between the fortieth and fiftieth days (the time of the Lord’s ‘absence’). Pentecost (now a day, not a period) acquired a vigil (in imitation of the vigil of Easter) and when, towards the end of the sixth century, Pentecost itself acquired an ‘extension’ (an octave), the process of fragmentation was complete.

If we are going to be able to evaluate this development, and to decide to what extent it represents a positive advance, and to what extent the loss of something valuable, we must now return to the New Testament and outline the theology of the sending of the Spirit in the context of the mystery of Easter.

[20]Cyril of Alexandria, PG 68, Io93, quoted by Daniélou, who comments: ‘For Cyril the content of the feast of Pentecost is the resurrection... Cyril distinguishes Easter from Pentecost not by its content, which is the same, but by the aspect under which it is considered' (op. cit., pp 322-324). Cf other references to Cyril, Origen, Eusebius and Maximus of Turln in Daniélou, op. cit., and Cablé, art. cit.

Guided by the Spirit

The Ascension and Pentecost with St Luke