Skip to main content
Photo by amppit at flickr.com 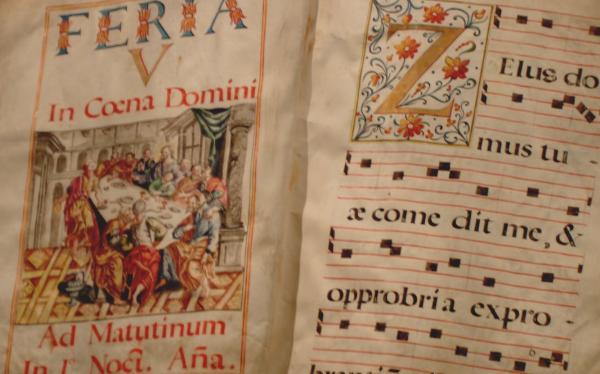 In part two of the ‘Lyrics for Liturgy’ series, Ian Coleman looks at the history and form of Gregorian chant.  What are the features of this particular genre of music that make it so ideally suited to Christian liturgy?

All liturgical music aspires to the condition of Gregorian chant. Before you file this statement away under whatever pre-conceived heading you may choose – 'liturgical purist', 'elitist reactionary', 'one of us', 'one of them' and so forth – I would like to spend some time explaining exactly what I do and do not mean by saying this. And especially what I do not mean. In actual fact, I shall be most satisfied if, by the time my readers reach the end of this piece, none of them, whatever their inclinations and orientations, feels particularly comforted by it, and all feel more than a little disconcerted.

To say 'all liturgical music aspires to the condition of Gregorian chant' is not the same as saying that the only proper liturgical music is Gregorian chant. Not at all. But neither is it the same thing as saying 'Gregorian chant belongs only in its own time.' What I have to say aims at clearing the ground, a necessary prelude to a proper consideration of what liturgical music needs to be. And Christians in the West at least should start this process by a profound examination of that great and subtle repertoire that we usually name 'Gregorian chant'. We perhaps ought to call it, like David Hiley, 'Western plainchant'[1] and thereby include what remains of the distinct music of Spanish, Milanese and 'Old Roman' traditions. But, for the moment, because it is the dominant form, 'Gregorian' will do.

This is the name applied to the ancient chant of the Western Catholic Church that has its origins in the 6th century, but which we largely know through the earliest notated manuscripts of the 9th and 10th centuries, together with certain later additions and developments. Gregorian chant probably has little or nothing to do with St Gregory the Great, whose name it bears. The title was added after the Frankish Reforms, which gave rise to these first notated manuscripts, and may indicate either a claim to authority (especially Roman authority) on their behalf, or possibly refer to the tradition that Gregory reformed and expanded: the Roman Schola Cantorum, which was, as its name suggests, one of the first training colleges for cantors and clerics to learn how to sing the liturgy. In the Gregorian repertoire, music for all the Propers (texts that vary according to the season and feast-day of the liturgical year) and the Ordinary (invariant parts, like the Kyrie and Gloria) of the Mass can be found. The Propers are part of the earliest strand, and James MacKinnon has claimed that these probably date back to the 7th century.[2] Outside of the Mass, there is also music for the Divine Office, particularly for what we now know as Morning and Evening Prayer (Lauds and Vespers).

The music is all monodic, which is to say it is melody only, with no harmony, accompaniment or rhythmic punctuation. At various times, it is true, there have been performance traditions which added drones, organum, bells or other techniques to the chant, but these have always been frowned on by purists of all ages. This is the first, and most vital normative condition of liturgical music – that it should be essentially vocal, and essentially 'univocal'. Clearly, a single vocal line enables the liturgical text to be proclaimed, invoked or re-iterated with maximum effect and maximum intelligibility, and it is striking how, as with all the spoken or recited texts of the liturgy, the Roman Rite has been the most conservative of all Christian traditions: non-Biblical texts are so rare as to be almost absent, and most of the Gregorian repertoire sets only words from the book of Psalms, or the Gospels. The exceptions to this are usually texts for specific feasts – especially feasts of Our Lady – which find no easy echo in Scripture.

At the same time, it is clear that the music of the Gregorian tradition is not merely functional or utilitarian: long, elaborate vocalisations (called 'melismas') are present, especially in the Mass-Propers, and they often have specific spiritual connotations. For instance, the long melisma that concludes the Alleluia of the chant before the Gospel at Mass prolongs the '-ia' syllable that corresponds to the Divine Name, and is deliberately elaborate, in order to convey the ineffability of that Name. The same is not true of the occurrence of 'Alleluia' at other points, either in the Mass or Divine Office, where it is more often the '-le-' syllable (Al-le-luia) which is extended. Thus, there is both a didactic and practical function to the Alelluia-as-Gospel-Acclamation: didactically, it prepares the hearer for a transcendent message, by emphasising wordlessness. Practically, it presents a challenge to the singers that is physical and musical: how to sustain and faithfully reproduce the complexities of the ornamented melody, how to prolong the Name into wordlessness, and thus prepare the sound-space for the Gospel proclamation that will follow. The melismas of the Kyrie Eleison may similarly be read as a special plea for mercy and kindness to God. By contrast, it is rare to find long melismas in some of the other mass-chants: Gloria in Excelsis Deo, for instance, or Agnus Dei.

There is also the phenomenon – unthinkable to those who believe that music should always imitate and embody a specific meaning or mood of a specific text – of the re-use of certain melodic formulae for several different texts. The 'family' of Gradual chants (the equivalent of the vernacular Responsorial Psalm) known as 'Justus ut Palma' is a case in point: here, at least a dozen different psalm-texts use the same basic melody. But there are always subtle adaptations and re-compositions, even if certain melismas do always recur. And even these melismas appear to convey a generic sense of sober exultation, which the early 9th-century commentator Amalar of Metz likened to the idea of 'sowing in tears'. For Amalar, the twin chants of Gradual and Alleluia were examples of the assembly 'sowing in tears' and then 'reaping in joy' – even  if, as was certainly the case, it was a solo cantor or group of cantors who were actually singing.[3]

Finally, the music of Gregorian chant is rhythmically free and unmeasured. It is utterly unconstrained by the idea of beat, and is thus antipathetic to the sort of music which aims to entice the human heartbeat or emotional pulse, and then manipulate it – for better or worse. The rhythmic freedom of the chant was undoubtedly originally valued for its 'other-worldliness', by comparison with the more 'lascivious' music of the theatre and of the pagan festivals of late Antiquity. These were a stock hate-object of many Patristic authors, notably St Augustine and St Athanasius. There is, however, another reason for espousing unmeasured rhythm: it enables the melody to embrace any text, no matter what its prosodic structure. While the chant is only really at home in the Latin language, it has shown itself equally suited to the prose of a Gospel narrative passage, the parallelism of Psalmody and other Old Testament poetry, and the quasi-classical metrics of Ambrose, Prudentius and the other Latin hymn-writers.

Much more could (and should) be said. But, for the time being, let us draw up a balance-sheet:

1. Gregorian chant is anonymous, the product of many generations of worshipping communities, striving always after an authentic, refined and demanding musical liturgy. This contrasts with the whole subsequent history of liturgical music, with its extremes of polyphonic virtuosity and drab populism.

2. Gregorian chant has an almost puritanical attention to Scripture, and especially Psalmody as the most authentic source of liturgical texts. In its monody and its rhythmic freedom, it shows itself uniquely flexible, by contrast with the obsession with sound-energy, metrical uniformity and textual  obscurity which has characterised the church music of the eighteenth, nineteenth and twentieth centuries.

3. At the same time, Gregorian chant has forged for itself a genuine and astonishing theology of music. Based on the ideas of ineffability – that which goes beyond words, and doxology, that which is pure, unalloyed praise of the Divine – it claims for itself a status which is alongside that of the liturgical spoken text itself. Not in any way superior to the spoken word, but with liturgical and theological potencies inaccessible to it, its music 'says God' in the memorable formulation of Dom Jacques Hourlier.[4] Furthermore, it is an art of Christian music which has been constructed defiantly and consciously in opposition to the musical cultures which have surrounded it – even if, inevitably, it has also drawn on them to some extent.

So, to conclude: this is the condition of Gregorian chant. Whilst it is uniquely adapted to the Christian liturgy, it is not the only possible music. However, can one imagine something better suited to the liturgy? Can one imagine any music more capable of serving the liturgy and yet still retaining (and insisting upon) its absolute artistic integrity and excellence? Can one, above all – can anyone – show me how any other music can create its own theological and spiritual milieu, without in any sense diminishing the power and authority of the Word? This is, after all, what we have come to accept as a totally impossible and unrealisable dream. And yet it is there, before our very ears!

Ian Coleman is Chair of the Music Committee of the Diocese of Westminster’s Liturgy Commission.

Into the Great Silence of Beethoven