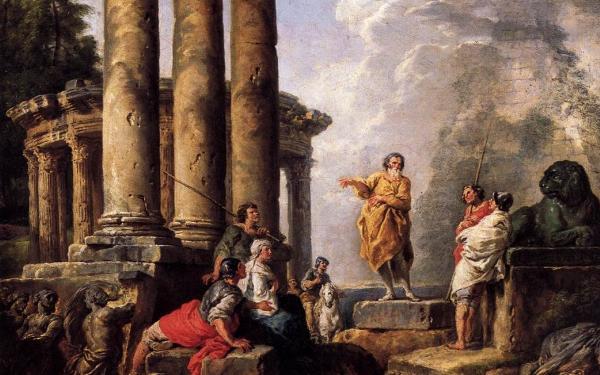 As we approach the end of the Week of Prayer for Christian Unity, Bishop John Arnold asks us to remember and be encouraged by the diversity that was a feature even of the early Church.  What challenges were faced by the different Christian communities that Saint Paul wrote to?

Has the focus of the Week of Prayer for Christian Unity changed? There are those who look on the more recent years of progress in ecumenism with a degree of disappointment. After some initial advances in friendliness and shared celebration, there is the feeling that things have slowed down so that ecumenical gestures are now only repeats of things that we have done before – no new ground has been broken, no watershed statements made. No doubt important work still goes on in the Secretariat for Christian Unity and similar places but, somehow, we do not feel the effects of any further progress.

I think it is true to say that I shared in this sense of impatience. In a world which has so much tension and strife, it seemed to me to be a great disappointment that the Gospel message, which should be The Word of God uniting us in His Son, is expressed in so many different ways and that various Churches and denominations live with a sense of distrust and suspicion between them. Far from being able to confront the injustice and the suffering of our world as Paul would have us do, as ‘ambassadors for Christ’, we seem to be caught up in the distractions of our own divisions, wasting our energy when there is so much that we should be saying and achieving in our world of need. While secularism seems to gain ground, we are often hindered by being unable to speak with a common Christian voice.

But things are looking a little different for me now. Although I am far from complacent about the progress of ecumenism in the second half of the 20th century, I now feel a little more peaceful about the state of inter-Church relations today.

My consolation comes from The Year of St Paul which has caused me, happily, to take time simply reading his letters and trying to place myself in the world in which he lived. I am almost embarrassed by the naivety that coloured my knowledge of St Paul over the years. It was not that I did not know about him, it was rather that I had taken so much for granted, without thinking. Coming from Pharisaism, a group in which he was not merely comfortable but a positively enthusiastic member, Paul has to begin to question everything. Suddenly, the hundreds of laws and regulations that had shaped his childhood, adolescence and early manhood have lost their foundation. He has a personal encounter with Christ and he has to try to work out what that means. Of course, there was almost nothing to assist him. The Gospels were still unwritten. There were no guides to Christian prayer or Christian living; this new faith was discovering itself. Paul, and the first generation of Christians, had to find out for themselves what it meant to believe in Christ and to put that belief into practice in their lives.

While it is true that Paul carried a simple message of faith, it was no easy matter to apply it in all cases in a similar way. Near the end of his life, Paul writes to Timothy and helps to prepare him for his growing responsibilities as a community leader. He says: ‘Remember the Good News that I carry, “Jesus Christ risen from the dead, sprung from the race of David”.’ (2 Tim 2:8). Working that out would mean dealing with diversity on a grand scale.

Imagine the world of St Paul. There were immense distances between communities with all communication by word of mouth or by letter carried by hand, on land or by sea. Communities were insular in a way that we cannot imagine in our world of global communications and 24 hour news. Paul is well aware that the communities that he first visits and to whom he later writes are the products of their own history and tradition. In each place the Word of God must grow as and where it is planted.

We should remember that the communities that embraced the faith were only tiny groups of people in the cities in which they lived. When Paul writes, for example, to the Corinthians, he is not writing to the majority of the inhabitants of that large city but to a small community, a tiny minority of the whole population. And how different those cities were! Take Corinth, for example. This had been a prosperous port under Philip and Alexander but as their empire declined, so did the port. It was almost derelict when the Romans began to expand their empire to the East and found Corinth to be an ideal location for a port for supplies and military expeditions. They re-opened the old port and built a second one. The city had to grow rapidly. That meant migration. People came from the East and the West: freed slaves, rural workers, anyone with an eye to commerce. And of course they brought their traditions and their cultures with them. Forging a Christian community among such diversity was going to be a long-term project. Paul reputedly stayed in Corinth for many months but he still writes letters to them after his departure concerning their progress. If they are really to embrace a Christian ethos then they must set themselves apart from the immorality, violence and drunkenness of the port city in which they live and set themselves altogether different standards. But the task was greater still. They had to find a common understanding among themselves, even though they had such different origins and culture. The Word of God would have to take root in the place where it was sewn, with all the challenges to be found in that place.

Philippi was a very different place and the difficulties for the Christian Philippians would be quite different from those facing the Corinthians. Here was a city which had first prospered because of the nearby silver mines. Then it found economic growth because it was placed on a major trade route between East and West. Philip of Macedon had given the city his own name, for its loyalty to him in his campaigns. But the current status of Philippi, as Paul arrived to preach the Good News, lay in the fact that Philippi had been named a Roman Province, which meant that all its citizens were Roman citizens by right. Paul found himself in a place that was proud of its political status and its loyalty to Rome. It was going to be more difficult to found a Christian community here, where Caesar and the “Pax Romana” were so cherished.

Ephesus, again, was another case entirely. A very wealthy city, it founded much if its prosperity on being the home of the goddess Artemis; much of the local economy thrived on accommodating the pilgrims who came to the shrine. It would be no easy business for a small community of Christians to thrive when all around are concerned with their jobs and economy. The Ephesians could only see the Christians as a threat to their livelihood. The community would need to concentrate hard on the essentials of their faith – and Paul knows this.

Recognising the diversity of the Early Church is something of a consolation and a comfort. We have all sorts of problems but it was always thus. In our celebration of the Week of Prayer for Christian Unity we are right to encourage one another and seek a way forward, but we also need to give thanks that, even in the midst of the confusion and complexities of our modern world, there is much to celebrate in the different ways we are confronting our problems, living with the difficulties and looking patiently but persistently for solutions and progress.

We feel we must be continually thanking God for you, brothers; quite rightly, because your faith is growing so wonderfully and the love that you have for one another never stops increasing; and among the churches of God we can take special pride in you for your constancy and faith under all the persecutions and troubles you have to bear. (2 Thess 1:3-4)

The Right Rev John Arnold is Auxiliary Bishop of Westminster and Titular Bishop of Lindisfarne.

The Letter of Paul to the Philippians