Skip to main content
Photo by Bjarne Muri at flickr.com 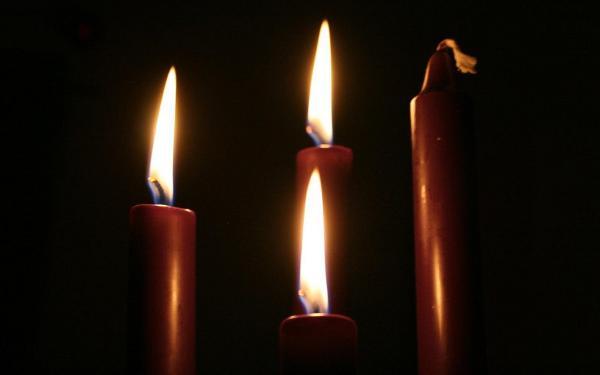 “Our Advent hope is assured and joyful, because Christ longs to be one with us.” Dominic Robinson SJ offers a reflection on the season of Advent in light of Pope Benedict’s first Encyclical, Deus Caritas est.

‘A favourable time for the rediscovery of a hope that is not vague and deceptive but certain and reliable, because it is "anchored" in Christ’[1].  Thus Pope Benedict described the season of Advent in a homily last December.  Advent, explains the Pope, is a time of expectation, characterised by a movement of the human heart reaching out to the God who responds in the incarnation with that incomparable gift of which we are certain, the gift of hope itself fulfilled in the coming of Christ.[2]

The Pope’s words reflected the message of his recently released Spe Salvi (‘Saved by Hope’)[3], Benedict’s second Encyclical, in which he called us back to recognise the treasure we have in the gift of Christian hope.  It is, however, in his first seminal encyclical on Christian love, Deus Caritas est, that we find the basis for his vision.  The hope of the Christian is grounded in the relationship between God and us.  In the incarnation the God-man beckons us out of our longing to find our hope completed in the gift of the Son.

We need to read Deus Caritas est in the light of the insights gained by the theologian Joseph Ratzinger during his theological career, especially through his collaboration with Hans Urs von Balthasar, as well as through his ecumenical influences in twentieth century German Protestant theology.  I will turn to these later.  Firstly, however, I would like to place these theological ideas in the context of our current liturgical season, as in recommencing the liturgical narrative at Advent we are embarking also on a theological journey and cycle.  The opening acts are played out on a stage which connects humanity’s original quest and God’s definitive answer to this.  We are reliving the drama of human desire and of unconditional love, or as the Pope terms it in Deus Caritas est of eros and agape.

Reflecting on this we might wonder too at the overall gift of a fresh Liturgical Year.  Once again, although we know for certain that God will come, will die for us, and rise again at Easter, we are called during Advent to see our need of God, to long for our salvation, and to celebrate that as a free gift which not only completes who we are as human beings, but also tells us all about the longing of God to reveal himself to us.

God in Christ knows the yearnings of the human heart, of our desire for completion.   Our Advent hope is thus assured and joyful, because Christ longs too to be one with us.  For the Pope, this time when we celebrate our human yearning for God’s coming is integral to the Christian pilgrimage.  Perhaps, we might say, this liturgical time which might seem to celebrate more eros than agape is a lived expression of the mutuality of agape and eros love.  Both eros and agape, says Pope Benedict, ‘- ascending love and descending love – can never be completely separated.  The more the two, in their different aspects, find a proper unity in the one reality of love, the more the nature of love in general is realised.’[4]

These reflections, however, are not just for Advent.  For the Pope this theme of agape and eros is clearly chosen as one which can speak profoundly to the contemporary world of what is at the very heart of a proper understanding and living out of the dignity of the human vocation rooted in Christ.  He intends to bring us back to Christ’s love for us so we may look at ourselves: loved infinitely by him, and called forward to reconnect with our desire for what is on our infinite horizon, the hope of glory.  It is useful to return to the thought of the Swiss theologian Hans Urs von Balthasar, as here we can find seeds of this approach.

Balthasar prefigured what Pope Benedict attempts to do in Deus Caritas est, which is to invite us to find the eternal response to our search for meaning in the appearance of God on the human stage.  In this we discover the true hope of a divine destiny, of an infinite horizon, and an active role in God’s plan.  The incarnation is thus rooted in the quest for human meaning, and the quest for meaning in the incarnation.  Balthasar also uses the terms agape and eros to characterise the eternal drama of God’s love for humanity played out in the appearance and descent of Christ.  The eros of our longing for the meaning of our earthly existence is echoed in the agape of the perfect image of the God who meets us in the event of the incarnation.  Christ, lover and beloved, our Advent hope, turns us towards a vision of our future glory for which we naturally long, and which will surely be sealed in his coming.  This is undoubtedly a timely theme in a world where so many are searching for a sense of value, dignity and identity, but in which the figure of Jesus Christ has, perhaps in a strange twist even at Christmas, become much less obvious as the focal point of culture and human identity.

This new dynamic focus on the mutuality of agape and eros love has a key place in the history of twentieth century theology and has significant ecumenical implications.  In the 1940s it was highlighted in Lutheran theologian Anders Nygren’s work, Agape and Eros[5].  This seminal study asserted that the New Testament understanding of Christ’s unconditional agape love as the perfect model of love for humanity was diametrically opposed to an understanding of love as eros.  For Nygren, eros represents the human desire to ascend to God.  He argues that agape excludes this notion of eros, as the latter is inextricably connected with the egoism of human desire for another.  Whilst he does not say that eros amounts to hedonism, Nygren does make a connection between the human desire for salvation and a Roman Catholic understanding of our ascent to God through participation in the life of grace.  This understanding imagines Christian spirituality, we might say, as a pilgrimage, moving from Fall to grace, from human desire to divine glory.  It finds its expression in public worship, we might add, in the colour of the Catholic liturgical cycle, journeying from Advent to Pentecost and back again, as opposed to a starker yet purer eternal Sunday of a more purist expression of Protestant worship.

The Swiss Protestant thinker Karl Barth, however, has a different approach to Nygren.  It must be granted that he follows clearly the teaching of Luther, in principle agreeing with Nygren and defending the argument that Christ’s agape and human eros are fundamentally antithetical.  ‘Even a superficial glance at the two phenomena and concepts, or rather at the realities of the two types of love’, he says, ‘necessarily discloses that we have to do here with two movements in opposite directions, so that there can be no harmony but only conflict between them’.[6]  But Barth is also trying to develop a theology which expresses the Christian pilgrimage, and so, in his discussion of agape and eros, he argues that the latter cannot be totally discarded.  Eros represents the reality of human desire for God, yet it must be understood from the perspective of God’s agape which in Christ frees eros, and draws it out of itself to love more fully.

This continuity will also constitute Balthasar’s discourse, just as it is also a key message of Deus Caritas est.  Agape and eros come together in a new way which proclaims how Christ’s infinite love transforms all our finite human desires.  Thus the drama of this encounter of Advent hope with Easter joy transcends the perceived dualism surrounding the motifs agape and eros in the Lutheran and Roman Catholic traditions.

It is fascinating that Pope Benedict should choose to reintroduce these two motifs in his first Encyclical.  Both he and Balthasar before him can speak to the whole of contemporary humanity from the perspective of a renewed Christocentricism which wants to proclaim, in the gift of Christ’s coming, the offer of infinite love as the answer to humanity’s deepest desires.

In a movement away from more traditional dogmatic theology, narrative and drama are becoming the medium of choice for many theologians. This is not just a development within theology but more broadly part of the movement in the history of ideas away from more systematic categories and  towards modes of expression which embrace the fluidity of the narrative.  Theology can speak of the dignity of the human person all the more meaningfully and creatively through narrative.  The narrative of our lives as Catholics moves from our Advent longing to our Easter fulfilment and the focus of this liturgical narrative is always Christ himself. Liturgical narrative also has ecumenical significance as it helps theology to develop its invitation to recognise the insights of doctrine across traditions, and present them in a way which may enable the reader to encounter these truths as a lived response to the Gospel.

So, in Advent we place ourselves in the drama played out in the encounter of our desire for transcendence with Christ who meets us and gives to us the inestimable gift of certain hope.  As Pope Benedict assures us ‘[R]edemption is offered to us in the sense that we have been given hope, trustworthy hope, by virtue of which we can face our present: the present, even if it is arduous, can be lived and accepted if it leads towards a goal, if we can be sure of this goal, and if this goal is great enough to justify the effort of the journey’ (Spe Salvi, Introduction).

[1] Pope Benedict XVI, Homily at Solemn Vespers for the First Sunday of Advent 2007.

50 years of humble progress: on the anniversary of Populorum Progressio

Fr Pedro Arrupe SJ
St Henry Morse SJ: ‘A saviour of life unto life’
Alfred Delp: committed to Christ
Grey Wisdom: not quite the last word on religious pluralism
‘Give them something to eat’: The Christian approach to food aid