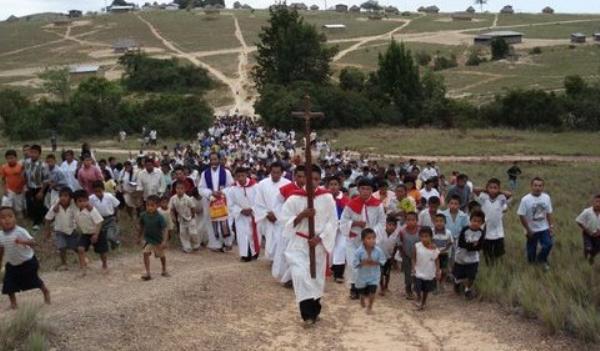 Dermot Preston SJ reports from Guyana on how life in this small, South American country has been affected by a recent wave of violent crime, and on the meaning that Holy Week takes on in the light of these events.

The absence of electric lighting brightened the magic of the nightscape.  The near-full moon shone.  I stood on the porch of the presbytery breathing deeply of the cool air; at 5000 ft the atmosphere is mercifully fresh and the consistent breeze deters mosquitoes.  The house to my back is built of wood, and stands primly on small stilts – 50 years old and really in need of renovation – the local bats and cushi ants have chewed away enough of the infrastructure to dissuade raucous partying by the local Jesuit community.  Even sneezing and heavy breathing are frowned upon.

I am in Kurukabaru, a diffuse Guyanese village with houses scattered over a couple of dry, undulating hills in the western savannah region of northern South America.  The residents of the village are almost all Amerindian people who live in the sandy settlement, but hunt and farm “in the bush”, as they call these northern reaches of the Amazon rainforest.  The people moved into the village 50 years ago and clustered around the area when the school was opened and the Jesuit missioners settled and built the house.  The dwellings are wood, with the occasional zinc sheet to mark the encroachment of modernisation.  Access to this corner of the world is by small plane: roads are few and anything smaller than a tractor will get in difficulties: the paths and bridges are for walking not driving – the former is normally quicker.

I have come here to assist the local Jesuit priest in a training seminar for Lay Ministers.  The people have gathered from the 14 village communities; some of them have been walking for three days to get here.  Life is hard for the people of the Pakaraimas: small and sturdy with jet-black hair and olive-tanned, weathered skin, they live a simple, subsistence-farming existence and cultivate the root-crop known as cassava which provides them with both food and drink.  The animals that they have traditionally hunted and fished are fewer these days.  No one is quite sure why.

On the Caribbean coastal strip of Guyana, the Lenten season was prefaced by the ominous rattle of automatic gunfire.  In the early hours of Sunday 26th January, the population of the country was stunned by a senseless massacre in the coastal village of Lusignan, a few miles to the east of Georgetown.  12 men, women and children died in a ten-minute killing spree as armed and masked gunmen riddled five houses with copious bullets.  Rumours move easily through the bewildered Guyanese population; nobody is quite sure of the reason behind the bloodshed – insurgency? vendetta? racial intimidation? – and the assassins have melted back into the darkness of their souls and have left little trace of their origins or motives.  The people of Guyana are used to small-scale corruption, incompetence and “choke-&-rob” muggings but most are stunned by such a barbarous act; all sides of this multi-faceted, cosmopolitan community are in a state of shock.  Fearful, yet full of grief, a confused populace seek institutional reassurance and fail to get it.  The Government make statements and promises, but seem powerless to act; the security forces, often lacking in the basic skills of criminal detection, are jumpy and frustrated and tend to take out their frustrations on angry but innocent bystanders; the churches and religious communities are on the back-foot, uncertain as to how to respond practically and constructively to brutal, heartless terrorism.  An uneasiness has settled on the coastal people.

But in the Guyanese interior, on my moonlit night, such events are far away.  The day’s seminar has finished with a showing of “The Greatest Story Ever Told” thanks to an LCD projector powered by a petrol-engine fuelled with precious gasoline flown in from the coast.  Moving pictures are still a novelty in much of the interior and a film brings a packed house from the village.  But now the film is over, the people filter back to their hammocks with candles and kerosene lamps, the roar of the generator is halted and silence collapses like a tent over the village.  I stand on the stoop of the Jesuit house and contemplate the stillness.  To my right are the forested highlands of eastern Venezuela; directly in front of me lay the moonlit mountains of northern Brazil…

Out of the darkness came light.  Two torches were moving irregularly from the Church building.  Two men were weaving towards me through the dried and thorny brush-wood of the parched garden.

The two men were carrying guns.

The first man reached me: he was a young Amerindian: he was hesitant and had a speech impediment so his mumbled words to me were unclear: “bandits” was the only word I could make out.  If he was declaring his criminal intentions he was doing so very gently; he appeared almost apologetic.  The second figure came up – he was older and more heavily armed than the young man.  He was also more confident “Good night, Father!” he said cheerfully.  I asked them what was going on and they both stopped, guns slung over their shoulders, happy to pass a few minutes chatting.  The older man explained that they were chasing bandits – Brazilian bandits who were criss-crossing the unguardable border between the two countries and taking advantage of the lack of police to pillage and rob the Guyanese locals.  The two men had been given the task of acting as local militia and were now scouting out possible places of overnight refuge that the desperados may go to ground.  I later learned that the older of the two men had a personal interest in the search - he had lost two sons to the banditos and he didn’t want the terror to inflict others.  He had been given a gun and he wasn’t going to hesitate to use it.  In the moonlight they were speaking about their search, the fear of the people of this area of the Pakaraima mountains and the uncertainties that it had brought into the village.  We all paused – pondering the grim implications – and then they were off, disappearing into the penumbra and calling back, “…but don’t worry, Father!” ...

Death, terror and uncertainty stalk the interior as ruthlessly as the coast.

I returned to Georgetown at the end of the seminar only to find that another massacre had taken place – this time in a picturesque town called Bartica where three rivers converge on their final drive for the Caribbean.  The same enigmatic gunmen as at Lusignan arrived late at night by speed-boat, shot five sleeping boatmen, execution-style, on the wharf, went to the unsuspecting police station, murdered 4 policemen, stole their weapons and ammunition and then went on an unhindered rampage of shooting and robbery of the centre of the town.  They departed, calmly, by boat, with their plunder, leaving 13 people dead and many wounded.  The nightmare is getting worse…

Two weeks have passed and no major incidents have occurred.  Guyanese sit uncertainly on the precipice of Holy Week: the secular folk cross their fingers hoping for nastiness to go away and to get a chocolate Easter egg at the end of seven days; the religious reflect and pray; and the Christians try to come to terms with the Passion of the Christ…

In Jesus’ time, Passover in Jerusalem was an edgy celebration.  Boosted by hundreds of thousands of visitors, a colourful swirling humanity brought life and unpredictability to the streets.  Humble pilgrims, rubbed shoulders with dodgy money-changers and ruthless merchants in search of gullible customers; zealots, fired-up with pride in their national holiday, cynically explored ways of provoking the mayhem that may catapult them into power and untold riches; the grim Roman Legionaries policed the streets suspiciously expecting an ambush in the anonymous and hostile crowded streets; religious officials struggled to keep an unstable status quo from getting out of hand; the poor and defenceless tried to  get noticed and obtain protection.

Palm Sunday is a Christian festival with a Janus-like quality: in one way, it points out the the triumphant procession of the Messiah as he rode into seething Jerusalem on a late afternoon, so many moons ago.  The crowds sang songs of greeting, covered the road with their cloaks and green branches and accompanied the Anointed One into His Father’s Temple.  Yet it also is the opening act of the darkness that engulfs the city five days later when the same crowd – palms forgotten, the wood of crucifixion at hand – conspired in the execution of the same man.  Pilgrims and residents came together to follow a different spectacle, more tragic and dangerous and yet symbolic of the divided human heart.  We welcome the Son of David; we crucify the King of the Jews.

The Palms symbolise this duality life and death – today, the palms are fresh and malleable, they are perfumed and able to be caressed into wonderful shapes, they decorate Churches and are waved in joyful processions; yet in 12 months time these same palms –  withered and dry – will be gathered, crushed and burned into the cinders we will use on Ash Wednesday in 2009.  The priests will take the charred remains of the leaves, mix them with the water of the earth and they will be smeared on the foreheads of the faithful: Remember that you are dust and to dust you shall return.

Lent has been a bloody and shocking time across Guyana and there is much talk of re-introducing capital punishment, of revenge, of reprisals, vigilantes etc… and in such a traumatised milieu a culture of death has an macho totalitarian appeal and gains a ready audience from among the fearful.  The Gospel, however, counters this trend: it points out that human ambition is ultimately empty and will pass away; it indicates that violence and physical power is fundamentally powerless; it signifies that life and love, not death and hatred, are the guiding principles which will unlock the mystery of the heart and the universe in which we live and breath and have our being.  It may be Good News, but at this time it is not a news that a majority of Guyanese want to hear; yet it is a Gospel that must be preached.

Dermot Preston SJ is the Regional Superior of the Jesuits in Guyana.